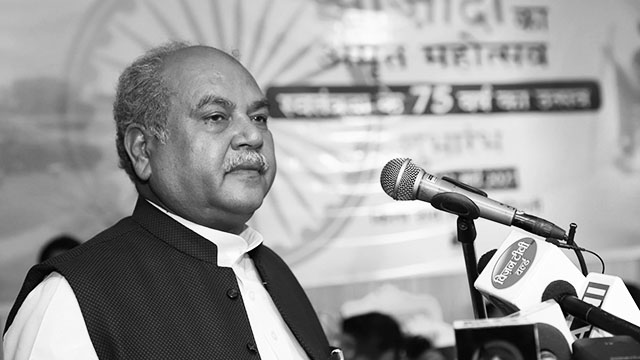 This new manoeuvre proves that the Modi regime is under pressure before the Uttar Pradesh Assembly elections, due next year, where the ruling Bharatiya Janata Party (BJP) will face the farmers’ vengeance for exhibiting hubris and resorting to violence against the protesters. Earlier, the Modi regime, during all 11 meetings, vehemently opposed the farmers’ demand of repealing the three contentious laws and a legal guarantee for minimum support price (MSP) of crops.

Tomar, the news agency PTI reported, said that to resume dialogue with protesting farmers, the Modi regime would want to know from the farmers their objections to the provisions “with logic”. “So, whenever farmers want discussions, Government of India will be ready for discussion. But we have repeatedly asked them to tell the objections in the provisions with logic. We will listen and find a solution,” the news agency quoted Tomar.

Now, by asking the specific “provisions with logic”, Tomar and the Modi regime are creating roadblocks before a dialogue. The farmers’ organisations, especially the Samyukt Kisan Morcha (SKM), which is an umbrella body of several farmer organisations, repeatedly asserted that these three laws themselves are destructive legislations for the Indian farmers. The SKM categorically stated that the farmers won’t retreat an inch from their demand of repealing these laws and enactment of a legal guarantee of MSP for crops and the government’s procurement.

Talking about the Modi regime’s proposal to resume dialogue with protesting farmers, BJP-ruled Haryana’s Home Minister Anil Viz accused the farmers of having a “hidden agenda” behind the protests for not showing flexibility. However, neither Viz nor Tomar could say what’s the Modi regime’s “hidden agenda” behind not scrapping the farm laws? Why is the BJP so stubbornly advocating the laws even when the party has been vanquished in rural Haryana, Punjab and western Uttar Pradesh by the farmers? Why isn’t the government giving its “logic” to say why the farmers need these laws?

During the last meeting on January 22nd, the Modi regime proposed to not implement the laws for 18 months, however, the farmers’ representatives have stated they don’t want any pause on the laws but their scrapping. However, as the laws are enacted by the Modi regime following the diktats of the World Trade Organization (WTO) and they serve the business objectives of big corporate sponsors of the BJP, the Modi regime is not willing to negotiate on repealing these laws.

By cajoling some of the farmers’ leaders, who had been preaching for a compromise since December 2020, to approach the Supreme Court for a solution, the BJP has cleverly tried to impose legal pressure on the SKM. The Supreme Court, after suspending the implementation of the laws, appointed a four-member panel consisting of Bhartiya Kisan Union (BKU) leader Bhupinder Singh Mann, Shetkari Sanghatana (Maharashtra) leader Anil Ghanwat, agriculture economists Ashok Gulati and Pramod Kumar Joshi, to resolve the impasse on January 11th. However, as all these members have somehow supported the farm laws, the farmers doubt the panel’s integrity.

Later, Mann recused himself from the panel. Ghanwat has been demanding further liberalisation of agriculture and total corporate control on the sector. Gulati has been advocating the BJP’s line. Also, the panel purportedly held meetings with different organisations representing farmers, agriculture markets, etc, but didn’t disclose who these people were and its approach has remained opaque.

After using brutal state violence against the farmers’ heroic tractor march in New Delhi on January 26th, the Modi regime has been trying to suppress the movement by demonising it as a “Khalistani separatist” movement and a COVID-19 superspreader. The servile lackeys of the Modi regime in the mainstream press have been spewing venom against the farmers since then. However, the farmers have shown resilience, and even braving the summer heat, they are camping at Delhi’s borders.

In this scenario, the BJP knows it will face a poll drubbing in March 2022, when Uttar Pradesh will go to the polls. Therefore, it has declared a hike in the MSP for paddy and oilseeds, which is quite insufficient given the rising inflation and fuel price hike. Yogi Adityanath’s BJP government in Uttar Pradesh is also rebuked for its disastrous COVID-19 crisis management—epitomised by floating bodies of poor villagers in the Ganges—and incompetence in managing the state’s agriculture. Amid this, the Modi regime is using the proposal to resume dialogue with protesting farmers as bait to buy time and peace, as the prime minister himself is looking frantically for options to revive his shattered brand image.

Can the farmers’ organisations talk to the government on anything if the latter remains persistent in pushing the anti-farmer laws? Can the pro-WTO and pro-corporate laws serve any good to Indian farmers who are suffering due to the very neo-liberal economic system that the WTO promotes and Indian feudalism that chokes its growth? The proposal to resume dialogue with protesting farmers is a hoax. The Modi regime isn’t interested in resolving the issue and it’s merely buying time until it can come up with a jingoistic stunt to captivate the masses. The farmers shouldn’t gulp the bait and continue their struggle till its victorious conclusion.