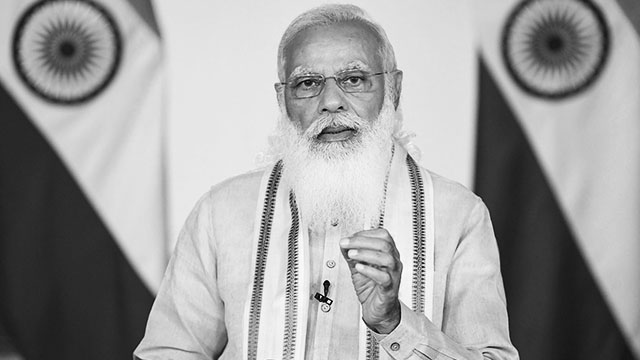 He came, he saw, and he remained nonchalant about the fire in the backyard. But then, when criticised, he attempted to douse the fire, although with a spoonful of water. If Prime Minister Narendra Modi’s clichéd televised address-to-the-nation on June 7th 2021 should have carried a warning text, then it would’ve said – “only for a surreal experience”. Modi’s address to the nation was a frantic bid to discombobulate his hyper-jingoist, upper-caste Hindu elite and middle-class followers, with the bait of COVID-19 vaccination, which is in limbo at present, while global pharma giants are profiteering from the vaccine business. This speech, like his other such stunts, is much ado about nothing.

In his 35-minute-long monologue, filled with clichés, Modi afforded to display insouciance, even when thousands are dying daily since April due to the second wave of the COVID-19 pandemic and the total unpreparedness on part of the government, which not only caused a severe medicine and oxygen but also created an unprecedented and grotesque cremation crisis. Corpses are now floating in the Ganges, which Modi was purportedly cleaning and beautifying for years. Modi, ironically, asserted that the “most effective against this invisible enemy (COVID-19) remains COVID protocol”.

This “COVID protocol” Modi emphasised, wasn’t on the radar when his Bharatiya Janata Party’s (BJP) government in Uttarakhand promoted the Maha Kumbh—a grand Hindu festival attended by millions—in April 2021, amid rising cases of COVID-19 and continued the event until it stirred a global criticism due to rising infections, death and destruction. Similarly, the “COVID protocol” was conveniently put on the backburner when Modi was canvassing for West Bengal Assembly elections, going even to the lanes and by-lanes begging for votes, and even praising crowds of a mammoth size that, he said, overwhelmed him.

Modi’s address to the nation on June 7th dealt with the Central Government’s COVID-19 vaccine procurement and vaccination plan, which, the critics allege, is a result of the Supreme Court’s reprimanding. The apex court had criticised the Modi regime’s nonchalant attitude regarding the arbitrary vaccine pricing and passing the bucks to the States without providing adequate money to them to buy the vaccines. There were two different pricing system in place for vaccines, which the Supreme Court criticised and asked the Modi regime to take control of the situation. The nutshell of Modi’s monologue is that his government is retreating from its mulish and obstinate resistance to the idea of universal vaccination.

After stubbornly asserting that it will only vaccinate people above the age of 45, the frontline workers, etc, while the States should bear the cost of vaccination of 18-44 years age group, the Modi regime is now retreating. Under pressure from the Opposition-ruled States and the Supreme Court, Modi agreed to make vaccination for all age groups free and capped the price of vaccines in the private hospitals, who will be allowed 25% of the vaccine pool, at Rs 150 per dosage. From June 21st, the entire vaccination programme, except for the private healthcare-run one, will be taken over by the Central Government. The 25% vaccine sourcing rights given to the States will end too. This declaration by Modi is a partial victory for those who have been fighting for a universal vaccination programme funded by the public exchequer.

However, as Modi had to bite the bitter pill, he didn’t spare the Opposition. He, using national television broadcasting as a political platform, threw barbs at the Opposition and the handful of media houses that still dare to criticise his policies. “Amid the demands for decentralisation of vaccination, the decision about priority to certain age groups was raised. Many types of pressures were exerted, and certain sections of the media houses ran a campaign to this effect as well,” Modi said during his televised address. “So, we announced that from May 1st, 25% of all procurement for the vaccination programme would be done by State governments. Many tried and came up against many challenges that the Centre had managed to overcome, dealing with manufacturers, pricing etc. Then a few days back many States said that a reverting to the old system was better,” he added.

Modi also blamed the previous governments since 1947 for the vaccine crisis. He said pandemics like COVID-19 are a once-in-a-century affair and his “government prepared” a quick vaccination plan to vaccinate frontline workers and people above the age group of 65 from January 16th onwards. Modi claimed that under his “Mission Indradhanush”, the total vaccination coverage since 2014 has increased to 90% in India from 65% earlier. He blamed the previous Congress and non-Congress governments for the fiasco. It’s a leitmotif he and the BJP have been using for its whataboutery to cover up failures since 2014. Modi continued counting the measures his government has taken, including the bare essential ones like manufacturing PPE kits and ventilators to shrug off criticism but didn’t mention why the government failed to augment the public health infrastructure to cater to the pandemic even when it got a year’s time to prepare.

Despite all the theatrics, Modi’s address to the nation can’t be considered an honest assessment of the situation as the vaccine manufacturing capacity of Bharat Biotech, which manufactures the Indian indigenous Covaxin, and the Serum Institute of India (SII), which manufactures Covishield of AstraZeneca-Oxford University, are not enough to cover up vaccination of all Indians by the end of the current year. The government plans to get two billion doses of vaccines between August and December 2021 to complete the vaccination drive. The Modi regime is relying even on controversial vaccines, like the one manufactured by Johnson & Johnson, to complete its target and has been waiving off indemnity for the pharma companies.

In the meantime, the World Health Organization (WHO) has still not approved Covaxin, which keeps only the Covishield as the reliable vaccine in India. Although India needs around 2bn doses of vaccines to cover the double-dose vaccination of nearly a billion citizens above the age of 18, the manufacturing capacity of Bharat Biotech and the SII will not suffice to meet the target. In an affidavit to the Supreme Court on India’s vaccine crisis, the Modi regime claimed that while Bharat Biotech has hiked its production from nearly nine million doses a month to 20m at present and will further increase it to 55m in July 2021, the SII has ramped up production from 50m per month to 65m per month.

With these numbers, it will take a long time to cover up the vaccination drive and that will make the government clueless before the onset of the COVID-19 third wave. The nasal drop vaccine for children, which Modi cited during his speech, will also take a long time to develop if proper trials are conducted. Hence, in this scenario, mostly children will become susceptible to the virus in the third wave. Modi didn’t tell the country what he plans to do and how he is going to fix India’s broken public healthcare system before the third wave.

Throughout his speech, Modi didn’t show an iota of honesty or courage, unsurprisingly so, to take ownership for the catastrophe caused by his government’s indifference towards the COVID-19 pandemic. Due to Modi’s unbridled narcissism, India exported a large chunk of crucial, life-saving medicines up to March 2021 along with vaccines developed in India. This has created a shortage in the market and aggravated the crisis during the COVID-19 outbreak. Even as Modi spoke, India’s recorded fatality tally stood at 349,186 and 2,427 out of them died on June 7th itself. Modi just used his quintessential histrionics to show his grief for the dead. But he didn’t care to answer whether the BJP is involved in manipulating death data in states like Gujarat, Madhya Pradesh, etc, as alleged by New York Times. According to the newspaper, in the worst-case scenario, 4.2m have lost their lives due to COVID-19 in India, and in the most likely scenario, the number is somewhere around 1.6m.

When the COVID-19 crisis unfolded and turned severe by mid-April, Modi remained busy in election rallies in West Bengal, often rallying thousands without masks or the necessary “COVID protocol”. The BJP cited the violations by other political parties to justify its COVID-19 protocol violations. The polls took place in an unprecedented eight phases, resulting in a sharp spike in cases. While people of the country were begging for oxygen, hospital beds and medicines, and strangers came out to form communities to help people, Mr Modi vanished from the scene and didn’t show any concern for the people. He went into total hiding after the BJP faced a severe setback in West Bengal.

Modi’s address to the nation was, like any of his previous stunts, a gimmick to tantalise his ardent followers and an attempt to show that it’s in control when the number of COVID-19 cases and the daily recorded death toll has reduced to some extent. This will allow Modi to create an optics, using his servile media houses, of his government successfully curbing the COVID-19 second wave. But whether those, who lost their dear ones in the second wave, will bite the bait and believe in his rhetoric once again is to be seen. In any case, learning from the COVID-19 second wave scenario, it’s important to force the government to fulfil its role outside the propaganda box, to ensure it takes steps to save lives and transparently allocates resources. This can’t be done without a mass movement and a transparent system of allocation of resources, the lives of the people can’t be saved.