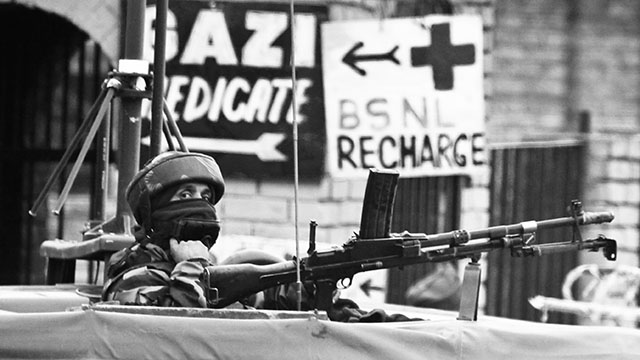 On Saturday, June 12th 2021, a group of militants opened fire at a security check post in North Kashmir’s Sopore. This militant attack took place at a time when large contingents of paramilitary troops have arrived in the disputed territory of Jammu & Kashmir. There is an ominous silence reigning, while the locals are frantically storing up essentials and people are expecting the worst. The militant attack in Sopore at this juncture raises several doubts.

According to a report by the news agency PTI published by The Indian Express, two policemen were killed and three were injured in this militant attack. Among the injured, one is a policeman and two are civilians. Dilbagh Singh, the Director-General of Jammu & Kashmir Police, accused the Pakistan-based Lashkar-e-Toiba of the militant attack in Sopore. Earlier, on Friday, June 11th, militants attacked a joint party of the police and paramilitary troops in Aglar village, 22 km from south Kashmir’s Shopian town. Also, the paramilitary troops resorted to aerial firing to disperse protesting youth at the Kralpora area of Chadooora in central Kashmir’s Budgam district.

This sudden rise in paramilitary deployment in the Kashmir valley, infamous as the world’s highly militarised zone, reminded the people of the ordeal they suffered during August 5th 2019. By imposing a stringent military lockdown and snapping telephone, mobile, internet and cable television connections of the Kashmiri people, Prime Minister Narendra Modi abrogated Article 370 and Article 35A of the Indian constitution that provided semi-autonomous status, although on papers, to the disputed valley. This was a long-pending agenda in India’s settler-colony project in Jammu & Kashmir.

Along with the abrogation of Article 370 and Article 35A, the former princely state of Jammu & Kashmir was bifurcated into two union territories of Jammu & Kashmir and Ladakh. While Jammu & Kashmir has been allocated a rubber-stamp legislative assembly, the people of Ladakh are even denied that. Very cleverly, the Indian ruling classes redirected Kashmir’s popular movement from the one to realise the right to self-determination to one to restore the pre-August 5th 2019 system, to return to the façade of semi-autonomy, which it never had. Jammu & Kashmir remained under lockdown, without telephone, mobile or internet.

It’s alleged that Prime Minister Modi and his Hindutva fascist Bharatiya Janata Party (BJP) are planning to establish settler colonies in the Kashmir valley to relocate northern Indian Hindus and change the demography of the valley following the Zionist model in Palestine. The Modi regime has officially not accepted this charge, however, this has been a long-time agenda of the Rashtriya Swayamsevak Sangh (RSS)–the patriarch of the Hindutva fascist universe.

At present, keeping in view the rising paramilitary deployment, it’s feared that the Modi regime and the BJP are planning to further bifurcate the union territory of Jammu & Kashmir into a Hindu and a Muslim-majority one so that Kashmir can be used for a settler-colonial project exclusively. Jammu & Kashmir Lieutenant Governor Manoj Sinha denied the charges calling it “rumour”. However, under the guise of a set of measures, it’s planning to take in Jammu & Kashmir, there are still scope for New Delhi to further subjugate Jammu & Kashmir. Even opportunist political parties in the valley are questioning New Delhi’s agenda on further bifurcation now.

Modi’s failure to save lives during the COVID-19 second wave has damaged his brand image. Modi is missing his persuading power; his halo of invincibility is breached. As the BJP-ruled northern Indian state of Uttar Pradesh is poll-bound in March 2022, the Hindutva fascists can resort to jingoism around Kashmir to titillate their hardcore Islamophobic supporters and polarise a large section of ostracised Dalits and backward classes.

Modi faced a similar situation before the 2019 Lok Sabha elections. However, on February 14th 2019, a militant attack on a convoy killed dozens of paramilitary soldiers in south Kashmir’s Pulwama. The xenophobia fuelled by the Pulwama attack and the subsequent purported “surgical strike” in Pakistan, helped Modi win a landslide victory in the elections.

Now to recover its lost ground and retain political hegemony, the Hindutva fascist camp may undertake a new lease of adventurism in Kashmir, especially by further bifurcating the territory on communal lines and by pushing the controversial settler-colonial programme. The militant attack in Sopore proved that peace will remain elusive in the valley and the Modi regime’s sudden deployment of troops is asserting that violence in the valley may be escalated, gradually, for Uttar Pradesh 2022.