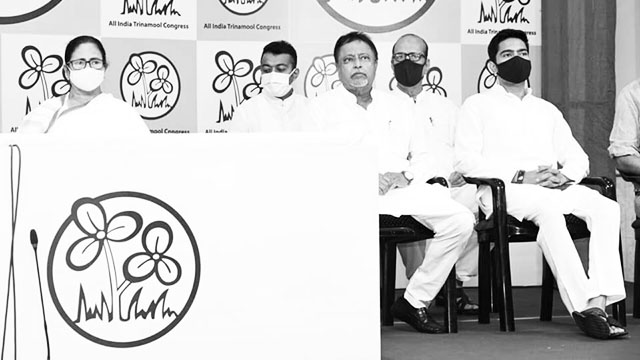 Ending all speculations, Bharatiya Janata Party’s (BJP) national vice president and member of the West Bengal Legislative Assembly (MLA) Mukul Roy returned to his home, the Trinamool Congress (TMC), along with his son Subhrangshu Roy, on June 11th 2021. Roy co-founded the TMC along with West Bengal Chief Minister Mamata Bandopadhyay in 1998. Mukul Roy re-joining the TMC in the presence of Bandopadhyay grabbed headlines in the mainstream press and created optics that bedazzled many political pundits.

Roy had joined the BJP in late 2017, after the Central Bureau of Investigation (CBI), the Enforcement Directorate (ED), etc, central agencies investigating the Sarada Chit Fund scam and the Narada Sting Operation started chasing him. Amit Shah, the then BJP chief, lured him to the party with a promise of immunity from scam investigations. Though the BJP’s West Bengal leaders used to call him a scamster, Roy became one of the chief strategists of the party and is credited for its meteoric rise in the 2019 Lok Sabha elections, helping it win 18 out of 42 seats. He also helped the BJP gain 77 seats in the West Bengal Assembly elections, a steep rise from three seats in the 2016 polls.

Now, Roy’s return to the TMC created a cacophony in both camps. While many TMC and BJP workers are left confused due to this acrobatic stunt by Roy and aren’t sure how to react to the situation, political pundits are predicting a quick collapse of the BJP in West Bengal as around 33 MLAs can change camps following Roy. Prime Minister Narendra Modi and Union Home Minister Shah are now discussing how to prevent the BJP from collapsing in West Bengal, as they pinned their hopes on Roy and other turncoats earlier.

A few days ago, before Mukul Roy re-joining the TMC, the BJP’s leader of opposition in West Bengal, Suvendu Adhikari, another TMC turncoat who followed Roy’s footstep to immunise himself from scam investigations by the CBI and the ED, met Modi and Shah in Delhi. It’s speculated that he told them about the gross anarchy prevailing in West Bengal BJP and the risk of losing TMC turncoats who joined the party aiming an imminent victory. Several TMC turncoats joined the BJP after they thought the party will be able to win the 2021 West Bengal Assembly elections.

It’s alleged that state BJP chief Dilip Ghosh has failed to manage the party after its ignominious electoral debacle. He and Adhikari have been missing from the grassroots, where the BJP workers have been facing the TMC’s wrath. This nonchalant attitude of Ghosh and Adhikari has created discontent within the saffron party. Many BJP old-timers, who have Rashtriya Swayamsevak Sangh (RSS)—the parental body of the BJP and the ideological fountainhead of global Hindutva fascist camp—roots, are lambasting the party for including the TMC’s turncoats and providing them with top positions and election tickets while overlooking the oldtimers. Rahul Sinha, a state BJP veteran, had been pushed aside to make a room for Roy, who was given the position of national vice president.

Amid this crisis, the news of the Matua community’s leader and BJP member of the Parliament (MP) Shantanu Thakur, along with Bangaon Uttar MLA Ashok Kirtania, Bagda MLA Biswajit Das and Gaighata MLA Subrata Thakur abstaining from Ghosh’s meeting at North 24 Parganas district sent an ominous signal as well. MP Thakur had raised his concerns on the BJP’s central leadership dillydallying the citizenship issue of the Matua community and even signalled to leave the BJP in late 2020. Kailash Vijayvargiya, the BJP’s Delhi-appointed leader for West Bengal, lured him with a ministerial berth to stay in the party, which never materialised. Right now, as the BJP is sinking in West Bengal, the absence of MP Thakur and his MLA loyalists like Kirtania, Das and Thakur is increasing the worry for the BJP leadership. The Matuas, whom the BJP is duping with citizenship promise, are a crucial Islamophobic, Dalit support base of the BJP and the RSS, which they can’t afford to lose.

This reverse migration of turncoats from the BJP to the TMC, especially Mukul Roy re-joining the TMC, exhibits that ideological fluidity remains dominant in the right-wing camp as both the parties are bedpartners with neo-liberal economic order and, despite wearing a “secular” attire, the TMC, alike the Congress party and other right-wing forces, remain friendly to Hindutva fascism. In the end, it’s the common people who suffer due to the political debauchery of the right-wing and its neo-liberal economic juggernaut. To uproot the BJP from West Bengal it’s imperative to build an alternative opposition force-based firm ideological standpoint against Hindutva fascism and neo-liberal economic order. Only such an opposition can fight Hindutva fascism and the BJP’s pseudo-opponents like the TMC.