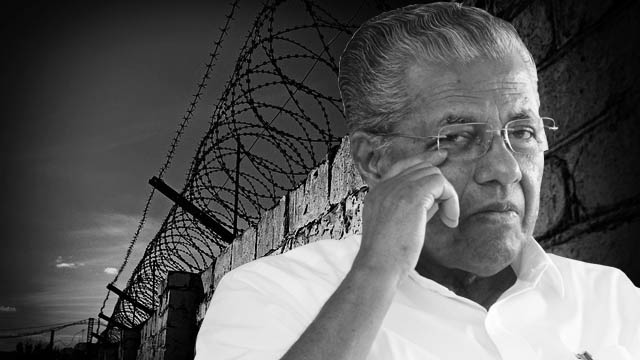 The Communist Party of India (Marxist) [CPI(M)] has been in a quagmire of controversies over its connivance with Prime Minister Narendra Modi’s Bharatiya Janata Party (BJP), especially in the 2021 West Bengal Assembly elections. A new controversy has been stirred over an order to construct a detention centre in Kerala to house the “foreigners” staying illegally in India. The CPI(M)-led Left Democratic Front (LDF) government is accused of implementing the National Register of Indian Citizens (NRIC or NRC) exercise to disenfranchise people.

Though the detention centres are present in the state of Assam, where mostly poor Bengali-speaking people—arbitrarily labelled as “foreigners” by the kangaroo courts, called foreigners tribunals—are lodged, they are not prevalent in other states. Now, as the contentious Citizenship (Amendment) Act, 2019 (CAA 2019) and the NRC are wrongly linked by Modi’s opponents and the NRC exercise is shown as a communal exercise, the hullaballoo over the detention centre in Kerala may take a wrong turn unless there is clarity over the complex issue.

What is a detention centre and how it’s linked with the NRC?

A detention centre is a facility to imprison foreign nationals who are detained under the Foreigners Act, 1946, by either the Union Ministry of Home Affairs (MHA) or the States. It also houses the foreigners who have completed their sentence and await deportation.

Citing the Model Detention Centre Manual, The Quint showed that a detention centre must have:

As the Assam NRC exercise was completed on August 31st 2020 and it excluded 1.9m people, there is a wrong notion that those excluded by the NRC are imprisoned in the detention centres. Moreover, there has been an obnoxious effort to connect the contentious CAA 2019 with the NRC exercise to endorse the BJP’s propaganda that only Muslims will be disenfranchised and thrown to the detention centres after an NRC and Hindus, as well as other non-Muslims, will remain safe. A close study shows that it’s the Hindus and non-Muslims who will suffer the most.

At present, the Assam detention centres don’t house NRC excluded people but those caught under the Foreigners Act, 1946. Under sections 3(2)e and 3(2)c of the Foreigners Act, 1946, the Central Government can detain and deport foreigners living illegally in India. Under articles 258(1) and 239(1) of the Indian Constitution, these powers of the Central Government are also entrusted to all the State governments and union territory administrators. The decision to establish these detention centres precede Modi’s rise.

Minister of State in the MHA, Nityanand Rai, informed the Parliament on March 18th 2020 that the Congress party’s Manmohan Singh-led erstwhile United Progressive Alliance (UPA) government instructed the States and the union territories to build detention centres following a Supreme Court instruction. The MHA issued instructions to all the States and the union territories on March 7th 2012 to build up detention centres. According to a report in The Hindu, from 2009 the Central Government started asking States to build detention centres.

The Assam NRC exercise took place with a cut-off date of March 24th 1971, however, for the rest of India, people without birth certificates will have to either prove citizenship through legacy documents dating before July 19th 1948, which, according to Article 6(b) of the Indian Constitution, is the cut-off date of Indian citizenship at the time of adopting the Constitution, or they have to show the names of their ancestors—parents, grandparents—in the electoral roll of the 1951-52 elections. More than 2.8m women’s names were removed from the 1951 electoral rolls as they didn’t tell their names to the surveyors due to prevalent patriarchal social customs.

It will be hard for the poor, who have since relocated to other parts, to prove such as well as the majority of non-Muslim refugees from present-day Bangladesh can’t prove their citizenship as well, despite living in India for decades following such criteria. The NRC will mostly disenfranchise them. Contrary to the myth of Muslims being the sole target of the NRC, it will be the Dalits, the tribal people and the backward class Hindus who will suffer axing.

Those excluded by the NRC won’t be called “foreigners” per se but “illegal migrants” and denied even the rights that a foreigner may enjoy. This makes it far dangerous than the foreigners’ detention. These people will form a large pool of cheap labourers who can work as modern slaves for the big corporates. Their cheap labour will force even those managing to retain citizenship to lower their labour price to remain competitive, resulting in a countrywide fall in labour cost while inflation continues to shoot up. This will add more money to the coffers of big capitalists. That’s the economics behind the NRC exercise and it’s the only reason, apart from saving on welfare spending for the poor, that the Modi regime is pursuing the agenda.

What is the story behind the detention centre in Kerala?

On December 18th 2020, Kerala High Court’s Justice PV Kunhikrishna reprimanded the state government for not building a detention centre for three foreigners–two Nigerians and one from Myanmar. While the Nigerians have got bail, the Myanmar national awaits deportation. The same bench told the police to urgently arrange a small detention centre in April 2021.

The LDF government’s Social Justice Department issued a notice — File No SJD/590/2020-C1— asking for tenders to construct a detention centre to “keep those who have migrated to the country without documentation and the ones who are continuing to stay despite the expiry of their allocated passport/visa duration and also the ones who were punished and completed their punishment span and are just waiting to finish the formalities until they can travel back.”

The notice also mentions in Malayalam that there will be social service workers allotted for the inmates’ well-being. The detention centre must have CCTV surveillance, barbed wire fencing, illumination around the compound and fire extinguishers. The notification asks interested organisations, willing to build such a facility, to contact the director of the Social Justice Department with a proposal, budget and infrastructure plan. This notice proves that it will not house a few foreigners but anyone “who have migrated to the country without documentation”, which conforms with the definition of “illegal migrant” as per the CAA 2003.

Chief Minister Pinarayi Vijayan had earlier denied that the CPI(M)-led LDF government is constructing a detention centre in Kerala. Vijayan’s government earlier claimed that the Congress party-led erstwhile United Democratic Front (UDF) government had decided to build the detention centre in Kerala. However, Vijayan, who recently returned to power with an unprecedented consecutive win after few decades, didn’t clarify why his leftwing CPI(M)-led LDF didn’t scrap the decision. To evade the responsibility, the CPI(M) started spreading misinformation regarding the CAA 2019, which helped the BJP in communal polarisation. Why even Vijayan’s outburst against the CAA 2019 is a hoax has been discussed in this article.

The CPI(M) wedded to the NRC scheme

The CPI(M) opposes the CAA 2019, which doesn’t threaten to disenfranchise anyone, but remains conspicuously silent on the CAA 2003, the law that mandates the NRC. Why does the CPI(M) remain quiet on the issue of the CAA 2003?

The CAA 2003 was passed by the Parliament in December 2003. The BJP-led National Democratic Alliance (NDA) government of former prime minister Atal Bihari Vajpayee was in power then. The Parliamentary Standing Committee on Home Affairs headed by former Congress party leader-turned-president Pranab Mukherjee, which submitted its 107th report on the CAA 2003 on December 12th 2003 to the Rajya Sabha, had members of the Parliament (MP) from the CPI(M) like A Vijayaraghavan (Rajya Sabha) and Swadesh Chakraborty (Lok Sabha).

This Committee approved the draconian provisions of the CAA 2003, especially its section 14A, which mandated the NRC. How the Committee under Mukherjee betrayed Indians, is discussed in this article. In this article, you will be able to know how the CAA 2003 has provisioned the disenfranchisement of millions of Indians.

Though Vajpayee’s NDA government passed the CAA 2003, it was enacted in December 2004 by Singh’s UPA government. The CPI(M)-led left bloc was the second-largest constituent of the UPA. At that time, not only the CPI(M) had an immense influence on the UPA’s policies, it also had a strong organisational presence in Kerala, Tripura and West Bengal. However, it didn’t rally against the CAA 2003 and didn’t demand its repealing. Rather than demanding the repealing of the CAA 2003, which has placed millions of Bengali Hindu refugees along with tribals, backward classes and minorities in a Damoclean situation. There are even incidents of the Left Front government in West Bengal unleashing police violence against the refugees.

The CPI(M) has been complicit in the NRC scheme and many Hindutva fascist projects. The detention centre in Kerala is the tip of the iceberg. The phoney communist party has been a flagbearer of the neo-liberal economy and it’s going to use its shrinking power to remain useful for the ruling classes. So, from the trends, it can be asserted that the CPI(M) will implement the NRC in Kerala and disenfranchise millions to provide a big pool of stateless labourers to big corporate houses.