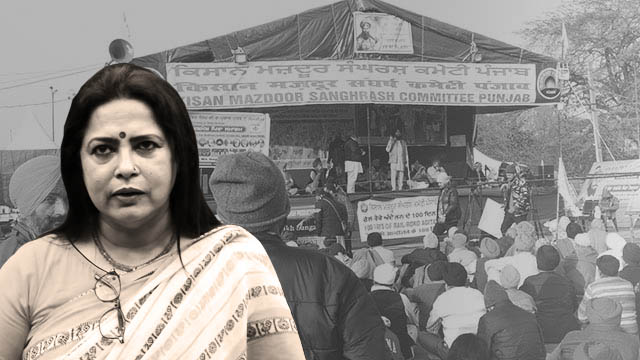 Meenakshi Lekhi recently became India’s Minister of State in the Ministry of External Affairs. This ministry has no connection with India’s agriculture and farmers. Yet, that didn’t stop Lekhi from calling the farmers “hooligans”, when she was asked about their protest movement at Delhi’s borders against the Union government’s three contentious anti-farmer agriculture laws. Lekhi’s remarks against the farmers caused a furore and she later retracted her statement, yet it showed how her Bharatiya Janata Party (BJP) is continuing its anti-farmer tirade to appease its corporate sponsors.

When Lekhi was asked to comment on the farmers’ stage-in demonstration at Jantar Mantar—a secluded place, out of public gaze, designated for protests in democratic India—by journalists, she called the protesters “hooligans”. Reiterating the BJP’s claim that the farmers’ movement, which will turn eight-month-old on July 26th and has been the longest-running sit-in demonstration in the world, is a “middlemen” movement, Lekhi said that the real “farmers don’t have time to sit at Jantar Mantar. They are working in their farms. Middlemen are behind them, who do not want farmers to get benefits”.

This audacity to call the farmers “middlemen” or “hooligans” exemplifies the BJP’s hubris. Even though the BJP considers the agitating farmers as “middlemen”-sponsored, the government held multiple rounds of discussions with them and even offered to pause the implementation of the laws for 18 months. So, was Prime Minister Narendra Modi’s government engaging with “hooligans”? How will Lekhi justify her government’s dialogue with the farmers?

Lekhi retracted her statement soon after she came under fire, especially from Punjab Chief Minister Amrinder Singh who demanded her resignation. “My words have been twisted. The (question during) press conference was on a completely different subject. Irrespective of anything, if my words have hurt farmers, I take them back and I apologise,” The Indian Express quoted Lekhi. This acrobatic apology stunt, like her party’s ideologue VD Savarkar, added embarrassment to the BJP at a time when the farmers have intensified their movement demanding repealing of the three agriculture laws and enactment of a new law to provide the guarantee of government’s procurement of all crops at the minimum support price (MSP).

Though Lekhi has apologised and did a volte-face, what triggered her initial fury? What made her accuse the farmers of being “hooligans” and what made her believe that those thousands of men and women sitting at Delhi’s borders are not farmers but “middlemen”? How many times did she visit the protesters at Delhi’s borders? Did the BJP send any fact-finding team to the borders? Apart from sending thugs to attack farmers with sheer impunity, when did the BJP visit the agitating farmers to hear their grievances?

A party that demolished a 15th-century mosque, organised major communal pogroms targeting minorities, vilified the minorities and oppressed the tribal people, its government that has curtailed human rights and freedom of speech since ascending to power, doesn’t have the right to call India’s farmers “hooligans”. The farmers are sustaining the movement using their resources. Lekhi and the BJP won’t comprehend this as they need corporate support to survive. But that won’t desist Lekhi and the BJP from demonising the farmers as their narrative that the agitators aren’t farmers, but “middlemen”, is their sole weapon to instigate the urban elites and middle-class against the farmers.

The farmers’ protest movement at Delhi’s borders for eight months has exposed the Modi regime’s anti-farmer character. This is a reason that Narendra Singh Tomar, the agriculture minister, despite dangling the bait of negotiations before the farmers, has been dismissing the movement’s demands. Now, Tomar even denied having information about the 300-plus deaths that took place during the past eight months at the protest sites. According to the Modi regime, none has died.

Lekhi’s vilification or Tomar’s cunning approach can’t destroy the farmers who have exemplified high-degree of resilience and perseverance in their eight-month-long agitation. If Modi and his minions want to see an end to the farmers’ protest, then the government must repeal the farm laws and enact a legal guarantee for MSP. Once that is done, the farmers will return home and Lekhi and other BJP leaders won’t have to raise their blood pressure dealing with their agitation. As the farmers’ resolution is iron-strong, the government has no option but to accept their demand to save itself from public humiliation.