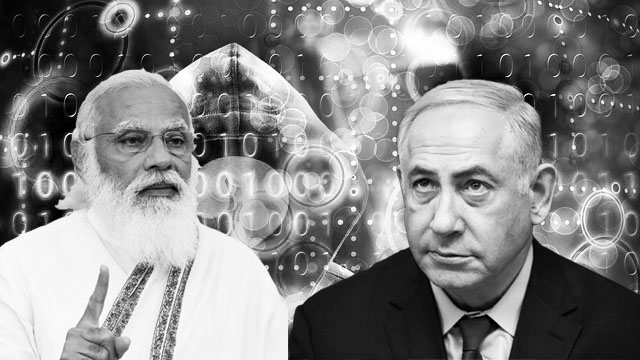 It’s true that India’s Opposition’s ruckus over the allegation of Pegasus spyware usage to snoop on over 300 politicians, journalists, government officials and capitalists, is quite overrated in a country that ranks 94 among 107 countries in the World Hunger Index, where 134m people earn less than $2.00 per day and where nearly 1.25bn people have signed up for the world’s largest state surveillance programme –Aadhaar. However, the Pegasus spyware scandal—SnoopGate— still exposes a heinous conspiracy, which is rooted in India’s ruling Hindutva fascist camp’s alliance with Zionist fascists.

Prime Minister Narendra Modi’s penchant for snooping is well-known. His closest confidante, Union Home minister Amit Shah, was accused of snooping a Bengaluru-based girl on his behalf. Now, although the Modi regime and the ruling Bharatiya Janata Party (BJP) are vehemently denying their involvement in the alleged Pegasus spyware “SnoopGate scandal”, there is no explicit denial of the Government of India’s dealings with NSO Group, the infamous company that developed the spyware program.

Whether the Government of India is an NSO client can’t be confirmed as the organisation is an opaque one and doesn’t share its customer details. Moreover, the government doesn’t disclose whether it has bought the Pegasus spyware to snoop on targets. This secrecy is maintained by evoking the “national security” waiver. The lack of information makes one depend solely on circumstantial evidence to connect the dots between NSO and the Modi regime, to prove that the latter is a customer of the former.

The OSY Technologies s.a.r.l, NSO Group’s subsidiary, had a legal audit done by a law firm in the wake of the 2019 controversy around the spyware being used through the WhatsApp messenger. The report stated that the “Human Rights Policy and attendant governance documents” of the OSY Technologies s.a.r.l and its subsidiaries are in sync with the “United Nations Guiding Principles on Business and Human Rights”.

This statement, that it doesn’t deploy or use the solution on behalf of its clients, ie, “vetted and legitimate government agencies” endorsed by the Zionist occupation regime, sounds true, as that’s how the business of cybernetics and security solutions work and none of the government agencies shares their data with vendors or service providers.

This means, to hack a phone and continue with snooping, the government agency must operate the Pegasus spyware itself and deploy it. In that case, it will have to first get a license to use the application, which is granted by NSO only after the Ministry of Defense approves such a deal.

“From start-ups to space, communications to cybernetics, Israel’s technological capabilities are merging with India’s,” the Prime Minister’s Office (PMO) tweeted on July 4th 2017 from the joint statement by Modi and Netanyahu. There were several Memorandum of Understandings (MoUs) signed when Netanyahu visited India in January 2018. One of these MoUs was on “Cyber Security Cooperation between India and Israel”.

Signed by Vijay Gokhale, then the secretary (ER), on behalf of India, and Yuval Rotem, on behalf of the Zionist regime, the “MoU on Cyber Security Cooperation between India and Israel” states that it “also envisages collaborating in the field of cyber security resilience…”, which gives a clear indication that the Government of India is authorised to partner with companies based in the Zionist-occupied Palestinian territories for cybersecurity, a category in which NSO group’s Pegasus spyware fits well.

This means the Government of India is one of the “vetted” governments to which NSO can sell the Pegasus spyware. In that case, the onus to prove innocence isn’t on NSO or the OSY Technologies s.a.r.l, but on the Modi regime. The Government of India needs to either prove that it didn’t buy the Pegasus spyware at all or that it didn’t deploy the program to snoop on the targets. In either case, it will be in the soup.

The Pegasus spyware’s connection with India and fascism

While Modi’s visit to the Zionist terrorist-occupied Palestinian territory and increasing the scope of the bilateral trade, including cybernetics, increased the possibility of it becoming a “vetted government” for the NSO and buying Pegasus, there is also a trail of events that brought the Indian security establishment and the NSO closer.

After winning the US presidential race in November 2016, Donald Trump declared that Michael Flynn will be his national security advisor. Flynn had to resign in February 2017 due to allegations of taking money from foreign outfits during Trump’s campaign. One of the major allegations against Flynn has been his association as an advisor with the OSY Technologies s.a.r.l, from where he received $40,280 in 2016 alone.

Flynn, as a designated national security advisor, came to India and met National Security Advisor (NSA) Ajit Doval in December 2016. The NSO Group and Pegasus spyware were in a quagmire of controversies in 2016 itself. Within a few months of meeting Flynn, Doval reached the Zionist-occupied territory and paved the way for Modi’s visit and agreements on security and other areas. Doval was even applauded by the mainstream press for increasing the Hindutva fascist Modi regime’s engagement with the Zionist terrorists, then led by Netanyahu.

A year after Modi’s meeting with Netanyahu, and a few months of the latter’s India visit, the Pegasus spyware was used to snoop on the selected numbers using WhatsApp breach. This happened when Trump was the US president and the nexus of Trump, Modi and Netanyahu gave a shot in the arms to the Zionist NSO and its subsidiaries. The Pegasus spyware became a hit in most of the countries ruled by NSO’s customers –“vetted” governments. It’s said, wherever Netanyahu went, Pegasus spyware found a customer.

There was an uproar in the US and the western countries, including Turkey, after the Wahhabi fascist Saudi monarchy killed Jamal Ahmad Khashoggi in Istanbul on October 2nd 2018. Trump’s regime also condemned the killing and pretended to pressurise the Saudi monarchy. However, knowing well the role of the Pegasus spyware behind the killing of Khashoggi, the Trump regime wanted the autocratic monarchy to carry on with the snooping exercise.

Who are the governments that are on the radar of the Pegasus spyware snooping? As per the investigation by the 17 global news organisations—including The Washington Post, the human rights organisation Amnesty International, coordinated by French media website Forbidden Stories— almost all of the customers of the Pegasus spyware are allies of the US and the Zionist terrorists.

Therefore, in the era of cyber warfare, it can be said confidently that the Pegasus spyware is a sophisticated cyber weapon used by the US lackeys against people of different countries, from Bahrain to India, from Azerbaijan to the UAE, every fascist and autocratic regime has used it against the people as well against foreigners.

The Pegasus spyware row and the Modi regime’s surveillance agenda

While the Modi regime and the BJP are denying any involvement in the SnoopGate scandal, which the saffron camp’s rabble-rousers called “anti-India conspiracy” although when the 17 organisations revealed the investigation done on a set of 50,000 numbers, it’s imperative to hold it accountable for the incident.

Firstly, the Modi regime must answer the Parliament whether India purchased the Pegasus spyware from NSO Group during or after Modi’s visit to the Zionist terrorist-occupied territory of Palestine? Secondly, what role did Doval play after meeting Flynn in December 2016 to get the NSO spyware on the shopping list of Modi? Thirdly, if the Modi regime is certain that it has not deployed the Pegasus spyware to snoop on the targets, as alleged by the investigation, then it must initiate a probe into the matter as it’s a breach of national security and violation of India’s sovereignty.

The reluctance of the Modi regime in releasing the details of its partnership with cybernetics import from the Zionist forces, its reluctance to release the details of Doval’s dealings with Flynn, who was a man selling Pegasus spyware globally, and its indifference to initiate an investigation into the allegation of snooping, prove that it’s somehow complicit in the act and is trying to cover it up.

The Indian people must be made aware by democratic and progressive forces regarding how obnoxious surveillance programmes like Aadhaar will not just deprive them of their right to privacy, but also from their right to food and their citizenship. The Aadhaar scheme is far more heinous and disastrous than Pegasus spyware, as it directly impacts the lives of millions. Under different agreements on agriculture, the Modi regime may share Aadhaar data with the Zionist state as well.

This Aadhaar system must be scrapped by the government, as it can’t snoop on the public of the republic, who authorised it to rule the country following codified laws. If one, who is employed in an organisation, starts snooping on the employer, then such an employee must be reprimanded. It’s the same case with the Modi regime.

For all purposes, the Modi regime can’t justify the use of state surveillance on the people of India, just like it can’t justify the obnoxious snooping scheme using Pegasus spyware. Modi’s snooping fetish can’t be billed to the Indian public exchequer and if the government is innocent, then it must prove so by adopting a transparent approach and by investigating the crime.