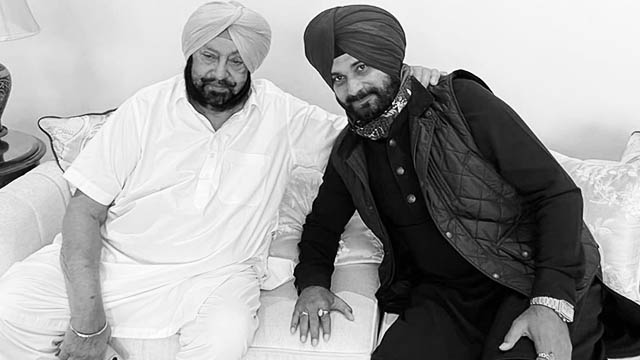 Bitter factional feuds in the Congress party is as old as the party itself. Now, as the ailing grand old party of India looks forward to skimming chances of dislodging Prime Minister Narendra Modi-led Bharatiya Janata Party (BJP) from power in 2024, factional feuds within its organisation are posing threat to two of the handful of states it rules. The Congress party’s factional feuds in Chhattisgarh and Punjab, in which the chief ministers of both states, Bhupesh Baghel and Captain Amarinder Singh, are entangled, is causing a severe headache for its disarrayed high command.

While TS Deo Singh, the health minister of Chhattisgarh, is fighting Baghel’s authority, which made the chief minister travel to Delhi twice a week and meet the Congress party’s member of Parliament from Wayanad, Kerala, Rahul Gandhi, and other senior leaders, motormouth gadfly Navjot Singh Sidhu has upped the ante against Singh, accusing him and the Congress party leadership of not allowing him to work independently. Chhattisgarh will go to polls in 2023 but Punjab will go to assembly polls in 2022, which is making the situation in the state volatile.

Even though the Congress party’s leadership can have both Baghel and Deo enter a compromise and broker peace through some larger grants to the health minister, the Punjab situation is far more complicated as neither Singh nor Sidhu will budge to the offers or the pleadings of the high command. The factional feuds in the Congress party in Punjab have entered such a stage where there is no return back.

Recently, all hell broke loose after Sidhu’s aides, Malwinder Singh Mali and Pyare Lal Garg, made controversial remarks on Kashmir, Pakistan and Afghanistan, criticising the Indian state’s stand on the issues. Singh and other Congress party leaders got an opportunity to hound the state chief and corner him using the party’s Punjab in-charge Harish Singh Rawat.

Mali, in a social media post, questioned India’s occupation of Kashmir and said the disputed territory belongs to the Kashmiris as both India and Pakistan continue to occupy it forcefully. “Kashmir belongs to Kashmiris. Going against the tenets of the UNO resolutions, India and Pakistan have illegally usurped Kashmir. If Kashmir was a part of India, then what was the need to have Articles 370 and 35-A? What was the special agreement with King Hari Singh? Tell people what were the terms of the agreement,” Mali wrote in a Facebook post.

He also asserted that the Afghans should decide the fate of their country. “Now it is their (Taliban’s) responsibility to protect Sikhs and Hindus. They will rule to improve the condition of the country, not like before,” Mali wrote. He also posted a cartoon showing tyrant former prime minister Indira Gandhi as a mass murderer, which was published in a periodical published by him in 1989.

Garg took pot-shots at Singh’s criticism of Pakistan, which he occasionally does to remain in the good book of New Delhi and to distance himself from the anti-Hindutva fascist politics of Punjab.

Over these remarks, Singh and Rawat started cornering Sidhu. Facing a backlash over the acts of Mali and Garg, Sidhu didn’t hide his anger. Sidhu, criticising Singh, Rawat and other detractors, said that he doesn’t want to be a “showpiece” if he isn’t allowed to freedom to operate.

“I have always worked towards changing lives; even today I’m working towards developing a Punjab model. I have told the high command that if I am able to live up to the expectations and hope of people surrounding the model, I assure you that I’ll not let the Congress down and it will prosper for the next 20 years. But if you won’t let me take decisions, Eint Naal Eint Bi Kharkaonga (it will be disastrous for the party). There’s no point in becoming a showpiece, (sic)” Sidhu said.

Using Singh’s anti-farmer outlook, amid the ongoing farmers’ protest against Modi’s three farm laws, Sidhu criticised the Punjab Government’s low state-assured price (SAP) for sugarcane. “The sugarcane farmers issue needs to be immediately resolved amicably …. Strange that despite the higher cost of cultivation in Punjab the state assured price is too low as compared to Haryana / UP / Uttarakhand. As torchbearer of agriculture, the Punjab SAP should be better !” he tweeted.

Singh’s government is already under pressure to accommodate the farmers’ demands for a minimum support price (MSP) guarantee for all agricultural products and he has been throwing the ball to the Central Government’s court to save his skin. If a new front is opened over SAP of sugarcane, a year before he seeks re-election, Singh will be in deep trouble. Due to this, he is also seeking the high command’s intervention to gag Sidhu and his aides.

The Congress party’s top leadership knows that Sidhu won’t be able to quit the party at this juncture. There isn’t any alternative to the Congress party in Punjab’s electoral arena at present. The BJP is wiped out of the state following the massive farmers’ unrest against Modi’s farm reforms. The Shiromani Akali Dal (SAD) has distanced itself from the BJP but the farmers, who are the largest bloc of voters in the state, won’t trust it due to its past crimes against them. The Aam Aadmi Party (AAP) of Arvind Kejriwal is organisationally weak and can’t throw any lethal challenge to the Punjab Congress party. Hence, even if Sidhu quits the party, he won’t be able to make a huge difference. This has made the Congress party’s high command take Singh’s side and discipline Sidhu.

But even these adversities won’t make Sidhu accept the humiliation and turn into an eminence grise in the Congress party. The factional feuds in the Congress party in Punjab, which is a contradiction between the big landlord lobbies, will grow in the days to come, as neither the party nor the high command can resolve the irreconcilable antagonisms within its ranks. Where will Punjab head in such a situation? Who will emerge as the victor – Singh or Sidhu? These questions will keep bothering the grand old party as it will strive hard to protect one of its last mantles.