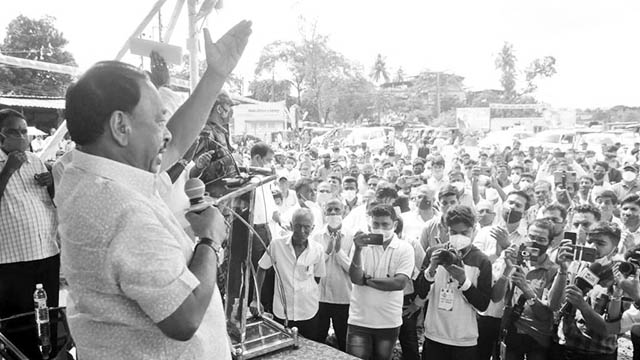 Bharatiya Janata Party (BJP) leader and Union minister Narayan Rane’s arrest on Tuesday, August 24th 2021, and his immediate release on bail became a new point of contention between the ruling Shiv Sena and its former saffron ally in Maharashtra. While the BJP views Rane’s bail as a victory, the Shiv Sena is contemplating his re-arrest in a few other cases against him.

According to Rane, he is not apologetic about the ‘slap’ remark, which provoked the Shiv Sena hoodlums to pelt stones at his house in Mumbai as well as create a ruckus all over the state. The former chief minister and BJP leader, Devendra Fadnavis, reportedly declared that the BJP supports Mr Rane, however, it doesn’t endorse his ‘slap’ remark.

While it’s wrong for the Shiv Sena to create a ruckus over a non-threatening remark by a political spinster, the BJP’s agitation against Rane’s arrest smells foul due to hypocrisy. The BJP is the last party that can cry over state vengeance as it’s the biggest perpetrator of state-sponsored crimes in India.

Several activists, intellectuals, lawyers and journalists are languishing behind the bars all over India, wherever the BJP is in power. The state of Uttar Pradesh has evoked the draconian National Security Act against anyone, especially Muslims, who opposed the BJP or wrote against it. It didn’t even spare the poor hawkers.

In Maharashtra, the BJP’s government locked up lawyers, activists, writers, and others under the draconian Unlawful Activities (Prevention) Act (UAPA), accusing them of conspiring against Prime Minister Narendra Modi. Jesuit priest Father Stan Swami died in custody due to the inhumane treatment met out to him. The rest continue to suffer as the sadist Modi regime is using the ordeal to scare other critics.

The BJP, which is the parliamentary wing of the Hindutva fascist Rashtriya Swayamsevak Sangh (RSS), has been promoting mob lynchings all over the country. The BJP-RSS leaders had earlier issued violent threats to bully other Opposition leaders and chief ministers, especially Kerala Chief Minister Pinarayi Vijayan and West Bengal Chief Minister Mamata Bandopadhyay. Yet, in most cases, the Party managed to escape the law, while its opponents suffer the worst for even appealing for peace and communal harmony. Umar Khalid’s case is a stark example of this.

For years, the BJP has been trying to wrest control of Maharashtra, where it suffered a major humiliation after the Shiv Sena, its long-term ally, was wooed away by the Nationalist Congress Party (NCP) chief Sharad Pawar and the Congress party, who formed a strange coalition and made Thackeray the chief minister. Fadnavis and his accomplices have repeatedly trained their guns against the Shiv Sena chief, and he has been hounded for speaking up against the BJP.

It’s easier for a Narayan Rane to get an immediate bail in India, as the BJP stands behind him. The same thing happened with BJP’s servile television rabble-rouser Arnab Goswami, who got an urgent Supreme Court hearing and was granted bail. But the Bhima Koregaon accused, journalists like Siddique Kappan—imprisoned in BJP-ruled Uttar Pradesh—who was arrested on his way to report the Hathras gangrape and murder story, activists like Khalid, etc, continue to suffer state repression as they spoke or acted against the interests of the BJP. This shows the privileges of the BJP in a Modi-fied India and how the state machinery has been selective in its inhumane persecution of dissenters.