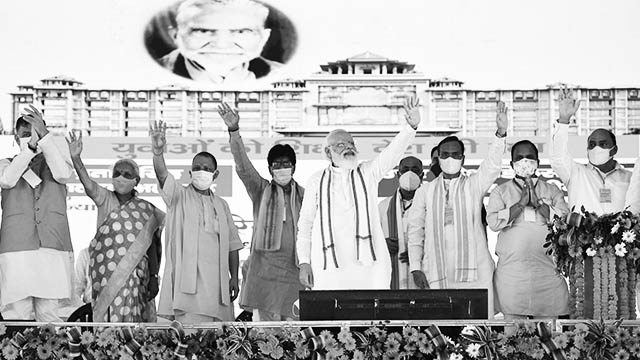 Prime Minister Narendra Modi’s Aligarh tour on Tuesday, September 14th, shall be memorable not because of him sharing the memories of a Muslim man selling locks made in Aligarh in his village, but for his attempts to woo the farmers of western Uttar Pradesh, especially, the Jat farmers who showed him and the ruling Bharatiya Janata Party (BJP) their might by organising a “Kisan Mahapanchayat” (farmers’ grand assembly) on September 5th.

Modi spoke about how his government’s policies have purportedly helped the small farmers, who own less than two hectares of land. He tried to count the so-called ‘benefits’ his government has provided to the farmers. Modi also claimed his government is paying an increased minimum support price (MSP) for crops, which we have shown is a fabricated claim here.

The major attraction of Modi’s visit was the announcement of an industrial corridor in Aligarh, especially for the defence industry, and the establishment of a state university in the name of freedom fighter Raja Mahendra Pratap Singh. Ironically, Raja Mahendra Pratap’s identity as a Jat was used in galore by the BJP to woo the community, as farmers belonging to the community in western Uttar Pradesh are vehemently opposing Modi’s three anti-farmer laws enacted last year.

While the BJP is trying to use Raja Mahendra Pratap’s image to lure the Jats, ironically the former monarch—who, despite his left leanings and revolutionary activities, had collaborated with the Japanese fascist imperialism to oust the British imperialists from India during the second world war—defeated the BJP’s founder and former prime minister Atal Bihari Vajpayee in the 1957 general elections.

A student at Aligarh Muslim University then called Mohammedan Anglo-Oriental College or MAO College, Raja Mahendra Pratap was a staunch secular person who formed the first Indian government in exile in Afghanistan along with Muslims. He epitomised the harmonious relationship that existed in western Uttar Pradesh and neighbouring areas among the Jat community and the Muslims.

Throughout his later life, Raja Mahendra Pratap fought for social reforms and opposed the casteism promoted by the Brahminical society. Raja Mahendra Pratap, who even met Vladimir Ilych Lenin, the chieftain of the 1917 Bolshevik Revolution in Russia, was fond of socialistic economic policy and would’ve been the last person to endorse Modi’s three farm laws that aim to turn agriculture into a fiefdom of corporate plunderers and render farmers their slaves.

It’s clear as daylight that the Modi regime and the Yogi regime are severely threatened by the farmers’ movement at Delhi’s borders. They are using all weapons in their arsenal to suppress the movement. No wonder, despite more than 350 farmers dying during the protests and most of them suffering brutal state terror, the National Human Rights Commission is ignoring their plight and dealing with ‘complaints’ regarding the movement’s alleged adverse impact on more than 9,000 micro, medium and large enterprises.

Even though Modi and Yogi will use the bait of Raja Mahendra Pratap Singh’s name by proposing a university in Aligarh and a defence industry corridor, these won’t successfully befool the masses or split the renewed Jat-Muslim farmers’ unity in western Uttar Pradesh. Education is anyways privatised by the BJP, therefore, the state university in the Jat icon’s name won’t help the poor Jat students, as they won’t be able to afford the fees at the market rate. Moreover, the defence corridor would need land acquisition and it’s to be seen how the BJP manages to annex land from the farmers for these projects.

For the BJP, the forthcoming Uttar Pradesh Assembly elections is a challenging assignment as Modi’s prestige is entwined with the Party’s performance. Moreover, the future of brand Yogi also depends on this election. The Opposition is disarrayed but the farmers have decided to organise 17 mega rallies in the state from where they will appeal to the people to defeat the BJP. Can the gimmicks by Modi and Yogi, or their communal campaigns overturn the farmers’ verdict? Who will triumph in Uttar Pradesh—the BJP or the farmers—will be decided by the twists and turns of politics in the next few months.