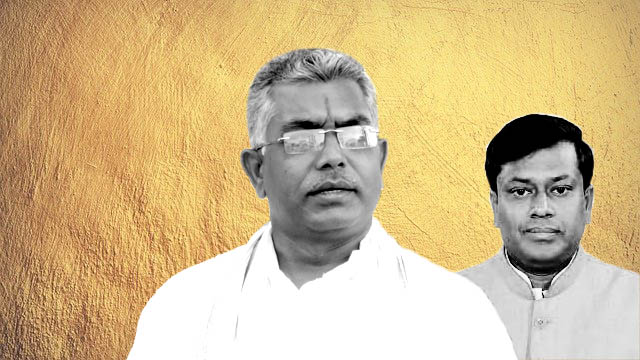 Bharatiya Janata Party’s (BJP) West Bengal unit is going through a tumultuous phase. On Monday, September 20th 2021, its West Bengal chief Dilip Ghosh was purged and was replaced by its member of the Parliament (MP) from Balurghat – Sukanta Majumdar. Ghosh’s tenure was up to 2023. As a token of compensation, Ghosh, an infamous hatemonger and rabble-rouser, has been made a national vice-president of the Party, a post which was, ironically, held by Mukul Roy earlier. Roy returned to the Trinamool Congress (TMC), the party he co-founded, in June, after spending three and half years in the BJP.

According to Ghosh’s loyalists, he is made a scapegoat for the BJP’s ignominious defeat in the recent West Bengal Assembly elections, in which Prime Minister Narendra Modi and Union Home Minister Amit Shah vigorously campaigned even at lanes and by-lanes to exhibit their desperation to seize the state. However, neither Modi nor Shah and not even the BJP president JP Nadda would accept the responsibility for the humiliating defeat even after spending billions on propaganda. Therefore, as the state party chief, Ghosh had to bear the brunt.

For Nadda and the central leadership, Ghosh was a liability. They earlier promoted Ghosh, a lifetime Rashtriya Swayamsevak Sangh (RSS) proselytiser, to the post as he is an expert in inciting communal violence and polarising the Hindus, especially the backward castes (OBCs) and the ostracised Dalits. It’d fulfil the BJP’s polarisation agenda. However, though the BJP fared well with 77 seats in the recent assembly polls vis-à-vis three in the 2016 polls, it fell quite short of the 200 seats that Shah had bragged about. Ghosh’s polarisation drive, despite working in the 2019 Lok Sabha elections, failed in the 2021 assembly polls.

After suffering the humiliating defeat, the BJP started a new vicious campaign to oust Chief Minister Mamata Bandopadhyay by accusing her of unleashing brutal terror on the BJP supporters. Bandopadhyay refuted the allegations but Ghosh, along with other state BJP leaders, supported by the Modi-Shah-Nadda clique, started an agitation to demand President’s Rule under Article 356 of the Constitution in West Bengal. It was the BJP’s desperate attempt to seize power, but the plan flopped as the public didn’t support the saffron camp’s assertions. Ghosh’s ranking fell further with the flopping of this campaign.

The BJP suffered the biggest jolt after Roy returned to the TMC. Following him, four newly-elected members of the West Bengal Legislative Assembly (MLAs) also joined the TMC. Many former TMC leaders whom the BJP poached before the polls with much hullabaloo are desperately seeking their re-entry into the ruling party. The BJP can’t manage the flock. Even by promoting a TMC turncoat like Suvendu Adhikari as the leader of the Opposition, the BJP isn’t sure whether it can retain around 40 of its MLAs who may switch to the TMC any day.

For this volatility, Ghosh was accused by his detractors. A factional feud within the BJP also intensified. Yet Ghosh remained nonchalant while the entire BJP’s morale continued to remain down even after four months of the election results. But the fall of another big star from the saffron sky sealed Ghosh’s fate as Nadda stepped in to settle the house in order.

On September 18th 2021, two days before Ghosh was sacked, BJP’s Asansol MP and former Union minister of state, Babul Supriyo joined the TMC. This incident again humiliated the BJP leadership as it’s the first instance when one of Modi’s former ministers and a sitting MP switched to another party. Supriyo had quit the BJP on July 31st after Modi purged him from the ministry. Though earlier the BJP leadership, especially Shah and Nadda, managed to cajole him to remain an MP of Asansol to avoid a by-election, his switch to the TMC exposed the vulnerability of the BJP in West Bengal. Ghosh had to pay the price.

The BJP’s victory in the north, especially in the tribal and Dalit refugee areas, bolstered the Hindutva fascist camp’s spirit. The RSS-led Hindutva fascist camp renewed the old demand for a separate state carved out of northern parts of West Bengal. Exploiting the sentiments of the Gorkha and Rajbongshi people, using the history of their deprivation from development and stake in power, their utmost marginalisation due to hegemony of the Bengali Bhadralok, Union Minister of State for Minority Affairs and Alipurduar MP John Barla raised the demand for another partition of West Bengal. Most of the BJP leaders based in the north supported the move.

This stirred controversy in West Bengal since June 2021. Though Ghosh and other BJP leaders from the southern parts criticised the demand to split West Bengal, the central leadership of the Party and the RSS supported Barla and others on the move. This is a reason why Barla was promoted as a minister of state by Modi during his cabinet expansion. Moreover, by dropping Supriyo, Modi inducted another West Bengal BJP MP, Nisith Pramanik, as a minister of state. Pramanik, alike Barla, hails from the north and is the MP from Cooch Behar, the epicentre of the Rajbongshi community’s movement for separate statehood. He has been instrumental in leading the BJP to win in the district, which Supriyo couldn’t in his constituency.

Now, Sukanta Majumdar, as the West Bengal BJP chief, can help the Hindutva fascist camp consolidate its strongholds in the northern parts by fuelling the demand for a separate state. Though the BJP is infamous for pulverising the diverse dialects, cultures, traditions, etc, under the RSS’s Hindi-Hindu-Hindustan juggernaut, it’s cunningly using the fissures in North Bengal and polarising the warring Hindu refugees and the aboriginal people using the bait of a separate statehood and by selling the euphoria called “Hindu Rashtra”. Though Majumdar may not be able to stop the erosion in the ranks of the BJP, due to the vigorous poaching by the TMC, he, as a loyal RSS stormtrooper, can flare up new communal conflagrations in the volatile North Bengal, where the Muslims are in the micro minority category.

Dilip Ghosh is bygone. Sukanta Majumdar is the future. He has already started his Islamophobic tirade by comparing the TMC rule with that of the Taliban. His criticism shows that the BJP-RSS—while collaborating with Bandopadhyay over a host of anti-people issues—will continue to use Hindutva-incensed communal frenzy, hatemongering and violence to disrupt peace and harmony in the society.

As a staunch RSS man, Sukanta Majumdar will carry forward Dilip Ghosh’s legacy, but it’s to be seen whether and how the politically conscious people of West Bengal thwart the Hindutva fascists’ evil designs and defeat its aggression.