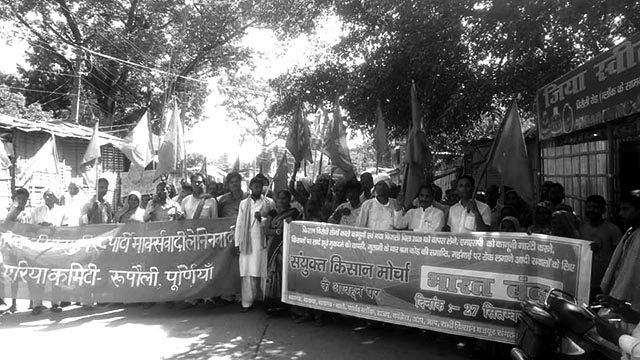 The farmers’ Bharat Bandh (general strike) on Monday, September 27th 2021 has received overwhelming support. On September 26th 2021, the farmers agitating at Delhi’s borders against Prime Minister Narendra Modi’s anti-farmer laws completed 10 months of their movement. Their perseverance in continuing the struggle humiliated Modi and his ruling Bharatiya Janata Party (BJP). Now, as the September 27th Bharat Bandh became successful, even in the BJP-ruled states, the Modi regime is appearing disarrayed over ways to deal with the farmers.

On September 27th 2020, President Ramnath Kovind gave his assent to Modi’s three anti-farmer bills passed in the Parliament using the BJP’s brute majority. This is the reason why the strike is called on September 27th. The strike call gained traction after brutal state violence was unleashed on agitating farmers in BJP-ruled Haryana’s Karnal earlier in September. The state violence killed one farmer and injured several others.

The September 27th Bharat Bandh is historic as it’s supported by over 40 farmers’ organisations, 15 trade unions, all major opposition parties and six state governments. The extensive support garnered by this strike is making it a successful political assault on Modi’s hegemony, from Haryana and Punjab in the north to Kerala and Tamil Nadu in the south.

Union Agriculture Minister Narendra Singh Tomar, sensing trouble, asked the farmers to shun the path of agitation and join the government in a constructive dialogue. Ironically, the same namesake of the prime minister had announced earlier that the government is ready to discuss all issues with the farmers except for their core demands of repealing the contentious laws and providing a legal guarantee of minimum support price (MSP) for all crops.

The farmers didn’t gulp Tomar’s bait as they realised long ago, after a series of meetings with him and other officials, that the government won’t budge and retreat from its corporate appeasement path. For the last 10 months, they have continued their struggle. Rakesh Tikait, Bharatiya Kisan Union (BKU) leader from western Uttar Pradesh, told the press that the BJP government at the centre and in Uttar Pradesh are duping the farmers and asserted that the September 27th Bharat Bandh will be “historic”.

So far, the Andhra Pradesh government under YS Jaganmohan Reddy, the Left Democratic Front (LDF)-ruled Kerala and Dravida Munnetra Kazhagam (DMK)-ruled Tamil Nadu have extended full support to the farmers’ September 27th Bharat Bandh. As the Congress party supported the farmers, Punjab and Rajasthan, which are also epicentres of the farmers’ movement, the Bharat Bandh has been peaceful and largely successful in these states.

The Reddy government has taken off all state transport and it has also decided to support the workers of Visakhapatnam steel plant agitating against the Modi regime’s privatisation drive. This is a first-of-its-kind in Andhra Pradesh, where successive governments have so far suppressed strikes and repressed the workers and farmers. It’s to be seen how Reddy’s government, which so far enjoyed bonhomie with the Modi regime, will support Andhra farmers in implementing the demands of the farmers’ movement – end to corporate farming and legal guarantee of MSP for all crops.

So far, the September 27th Bharat Bandh has been successful in Andhra Pradesh and Telangana. Unlike Jagan Reddy, the Telangana Rashtra Samithi (TRS)-led Telangana government has remained neutral on the strike call, though it has been bashing the BJP for quite some time. Why Telangana Chief Minister K Chandrasekhar Rao is so tepid regarding the strike?

Similarly, West Bengal Chief Minister Mamata Bandopadhyay and her Trinamool Congress (TMC) vehemently opposed the farmers’ September 27th Bharat Bandh. Despite supporting the farmers in words, the TMC has shown its hypocrisy by unleashing police violence on those supporting the strike in Kolkata and the districts of West Bengal. What made Bandopadhyay go soft as well?

In Kerala, the LDF, led by the Communist Party of India (Marxist) [CPI(M)], has been supporting the farmers’ movement in Delhi’s borders. The All-India Kisan Sabha (AIKS), which is the CPI(M)-affiliated farmers’ body, is an important constituent of the Samyukt Kisan Morcha (SKM) – the steering body of the movement. Moreover, the left-affiliated trade unions, farmers’ organisations, youth and student organisations, bank employees’ organisations, etc, have participated en masse in the September 27th Bharat Bandh amid the COVID-19 restrictions in the state.

The DMK-led Tamil Nadu government’s support to the September 27th Bharat Bandh created a massive impact in the largest southern state. The DMK has mobilised its organisation and mass organisations to enforce the strike action against the “autocratic Modi government”. Not just the DMK, the Tamil Nadu farmers’ organisations, trade unions and civil society activists are also participating in the strike and turning it into a remarkable one in the state’s history.

The Congress party is supporting the farmers and their September 27th Bharat Bandh. The Congress party—the harbinger of neoliberal economic reforms in India—is now under compulsion to support the farmers to secure its political future. Both Punjab and Rajasthan were the first of the few states that saw the agitation against Modi’s farm reforms when they were imposed through ordinances in mid-2020. Since the ordinances were turned into laws, the farmers’ protests in these states grew manifold.

While the Congress party’s support—especially in Punjab where Navjyot Singh Sidhu managed to wrest control of the government using Charanjeet Singh Channi, the new chief minister— is aiding the farmers’ September 27th Bharat Bandh, it’s unlikely that the grand old party will do anything to implement the farmers’ demands, especially ensuring MSP for all crops. As Punjab goes to poll in 2022, the Congress party will use the optics of its support to the farmers as a trump card to win votes and combat the anti-incumbency waves.

In other Congress-ruled states like Chhattisgarh and Rajasthan, the September 27th Bharat Bandh has been successful. Public transports remained off the road. Shops and establishments remained closed in different parts. Railway transport also suffered due to brief rail obstruction movements in different states, especially in Rajasthan’s neighbouring Haryana and Punjab.

There is less impact of the September 27th Bharat Bandh in Maharashtra, though the ruling coalition members like the Nationalist Congress Party (NCP) and the Congress party have supported it. Even Raju Shetti’s Swabhimani Shetkari Sanghatana (SSS) has joined the strike, but apart from the rural pockets, the strike didn’t impact the cities like Mumbai and Pune.

Despite the threat of state violence, the farmers and workers fought to observe the September 27th Bharat Bandh in BJP-ruled states like Bihar, Haryana, Karnataka, Madhya Pradesh, Uttar Pradesh, etc. The farmers’ organisations, opposition parties and other mass organisations paralysed the normal life in these states through consistent agitations.

The BJP-ruled Haryana deployed paramilitary in Jind as the farmers have blocked highways in 25 places of the district. The traders have joined in the strike making it fully successful. Railways and roads were blocked by the farmers and activists in Haryana. Railway traffic is affected in Northern Railways’ Ambala, Firozpur and Delhi divisions. Traffic in Gurgaon was severely impacted due to the Delhi Police’s restrictions at the border.

In Bihar, the Rashtriya Janata Dal (RJD), the Congress party, the Communist Party of India (Marxist-Leninist) Liberation [CPI(M-L) Liberation], the Communist Party of India (CPI) and the CPI(M) took part in the Bharat Bandh. The strike has been successful in most parts of Bihar. The CPI(M-L) Liberation, the Congress party and the RJD took out several rallies in different parts of the state. In capital Patna, the protesters clashed with the police repeatedly.

Throughout Uttar Pradesh, the impact of the September 27th Bharat Bandh has been quite impressive. While the strike was nearly complete in districts like Hapur, Meerut, Saharanpur, Shamli, Moradabad, etc, lying in the epicentre of the farmers’ movement in Uttar Pradesh –the western belt, even in cities like Lucknow, the strike’s impact was felt as the Bahujan Samaj Party (BSP) and the Samajwadi Party (SP) tendered support to it.

The farmers’ September 27th Bharat Bandh has so far shown that not just the farmers remain united in their struggle against the three farm laws, they even retain the active support of the working class, the small traders, students, youth and others. The support from the bank employees and officers to the farmers showed how a solidarity network is growing against Modi’s assault on all sections of the society.

As the September 27th Bharat Bandh achieved success, the Modi regime will continue to face extreme difficulties. As the farmers are proactively quashing the communal polarisation agenda of the BJP, it’s not easy for the BJP to trigger any anti-Muslim pogrom using Islamophobia. Rather, as the farmers’ movement grows, there is a strong possibility that communal polarisation done so far can be reversed in the rural areas. If that happens, the BJP won’t merely suffer humiliation in the Uttar Pradesh polls, but also suffer setbacks all over India. Without the BJP’s downfall, the pro-corporate farm laws can’t be repealed, and farmers should strive for that.