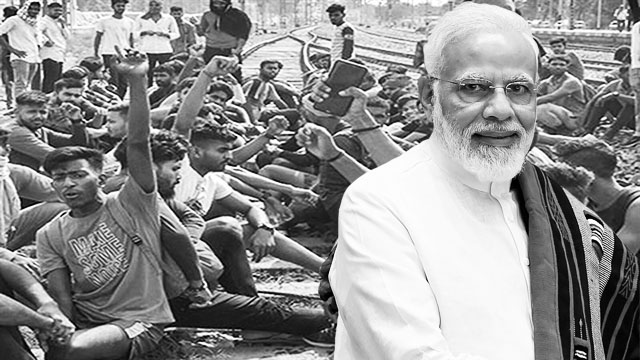 Soon after Prime Minister Narendra Modi’s government announced the “Agnipath” scheme, a programme to hire contractual soldiers without retirement benefits to cut expenses in the long run, India experienced a massive outburst of unemployed youths in different parts of the country. The “Agnipath” protests became a major embarrassment for the Modi regime and the ruling Bharatiya Janata Party (BJP).

The “Agnipath” scheme ends the short-service commission recruitment, under which youths were drafted in different military branches for a short period and then decommissioned with pension and other retirement benefits. Under the “Agnipath” scheme, the BJP government will hire youths aged 17 to 23 (21 after 2022) for four years; after that, they will be decommissioned with no retirement benefits.

For millions, mostly from lower-caste underprivileged backgrounds, who compete to grab a soldier’s job, what was hitherto considered, a “secure job” in a dangerous profession, the “Agnipath” scheme unveils a gloomy future. The “secure” factor is now gone. After four years, 75% of those drafted into the military services will be unemployed again, and only 25% will be retained.

The collapse of the last vestige of the secure government employment for the masses, where the poor would get a job to train guns often at other poor people in a different part of India’s territory, sparked a furore and detonated the explosive of sheer frustration that was piled up for years, thanks to Modi’s indifference towards the unemployment crisis.

The “Agnipath” protests highlight the plight of India’s unemployed youths, for whom the “secure job” opportunities have been shrinking continuously, and it has also exposed India’s simmering economic crisis. Since the 2016 demonetisation exercise, the Modi regime’s gross financial mismanagement and unapologetic corporate appeasement have been driving the Indian economy towards its inevitable collapse. Yet, the Modi regime didn’t retreat!

Why did the Modi regime propose the “Agnipath” scheme?

During the FY 2021-22, the capital expenditures’ RE, mostly spent on buying military hardware, was Rs 1.39 trillion, which is Rs 37.90bn more than the BE of Rs 1.35 trillion. The lion’s share of this allocation mostly goes to the American and European —including the Russian — military-industrial complex, whose key players exert influence on Modi’s military and foreign policies.

Thus, if the defence pension expenditure can be reduced using the “Agnipath” scheme while dangling the bait of a million Union government jobs before India’s unemployed youths, the Modi regime can save a lot of money annually and close the revenue deficit, which is widening, year upon year, at an unprecedented level. However, it’s not easy to handle the repercussions!

If the Modi regime is facing difficulty in paying pension bills of the soldiers, used as pawns to titillate the Hindutva fascism-incensed majority community with a high dosage of jingoism, it means the government may soon convert most Union government jobs, including railways, into contractual ones. In that case, many youths, who aspire for other government jobs, will also suffer.

Also, although Modi promised “One Rank-One Pension” to the former soldiers who had been agitating against the discriminatory pension policy, the “Agnipath” scheme will bring forth a new system of discrimination. One section of former soldiers will receive pensions, while another section won’t. Although the government’s pension expenses will fall in the long run, its financial vulnerabilities won’t end here.

How will the “Agnipath” scheme harm the economies of the States?

Rs 2.33 trillion has been allocated as BE for defence revenue expenses, including salaries, in the FY 2022-23. In FY 2021-22, the RE for revenue expenses was Rs 2.29 trillion, an increase of Rs 175.39bn from the BE of Rs 2.12 trillion. A major portion of this amount is meant for the salaries of the soldiers and officers.

While the government will maintain the size of the armed forces at any given point, there will be a variation in the number of people drafted from each state into the services. The States won’t have consistency in their remittance incomes and pension earnings. This will increase poverty in States like Bihar and Uttarakhand, which provide maximum soldiers.

Once decommissioned from the services, the young soldiers will return to their respective States to only increase the unemployment count. There will be a contradiction between the former soldiers and freshers in the job market. As the Modi regime proposes a quota of around 10% for the “Agniveers”—as the contractual soldiers are known—it will further aggravate the antagonism.

Caste discrimination will be prominent

Indian Army’s regiments are mostly caste-based. There have been allegations that the ostracised Dalits and tribal soldiers suffer due to caste discrimination from the members of the upper castes belonging to their own ranks and their higher officials. Now, when the list of the 25% “Agniveer” soldiers will be finalised for permanent commissioning, caste may play an important role.

In this situation, the Dalits, the tribal people, minorities and other backward classes (OBCs) will face discrimination by the upper-caste officials. The upper-caste Hindu domination in India’s military branches will further curb the employment and empowerment opportunities for the oppressed communities, especially the Dalits, tribal people, Muslims and Christians. This can cause fatal disunity within the military’s rank and file.

The “Agnipath” protests have opened a pandora’s box. At the peak of India’s unemployment crisis, Modi’s frantic attempt to cut down on defence pensions backfired quite severely. Poll-bound Himachal Pradesh, from where a large number of men join the Indian armed forces, also suffered due to sporadic protests apart from BJP strongholds like Bihar, Haryana, Uttarakhand and Uttar Pradesh.

The sight of trains and buses burned by the “Agnipath” protesters has become ubiquitous. BJP offices have suffered the brunt of the youths’ anger in Bihar and other States. In Bihar, the Union government has provided Central Reserve Police Force (CRPF) security to the province’s ten top BJP leaders. The BJP is still defending the scheme despite these violent protests.

Although the BJP leadership is defending the scheme and calling the “Agnipath” protests the work of a handful, the way it demeaned the farmers’ movement against Modi’s anti-farmer laws in 2020-21, the grassroots leadership is aware that until the situation isn’t brought under control, the protests will spread like wildfire. However, it’s unlikely that the Modi regime will pay heed.

Moreover, this time the Opposition has got a powerful issue related to the military, which is quite an imperative instrument for the BJP to gag its critics, to pin down the regime. As predominantly Hindu youths are agitating in the BJP’s citadel, therefore, the Party isn’t even able to fire a salvo or accuse them of being foreign agents, fearing repercussions.

Hence, none of the BJP leaders is calling for a bulldozer to demolish houses of those participating in the “Agnipath” protests, unlike when Muslims protest on the streets. The BJP-led state governments in Madhya Pradesh and Uttar Pradesh are infamous for demolishing the houses of those accused of protesting without any legal order. This has even irked the Supreme Court.

Modi can’t afford the “Agnipath” protests for long, especially when his government is in a fiasco and suffering setbacks. However, in an election year, he can’t roll back the scheme hastily to avoid exposing his regime’s weakness, which happened during the farmers’ movement. Irrespective of what Modi does now, the “Agnipath” scheme will remain an albatross around his government’s neck.