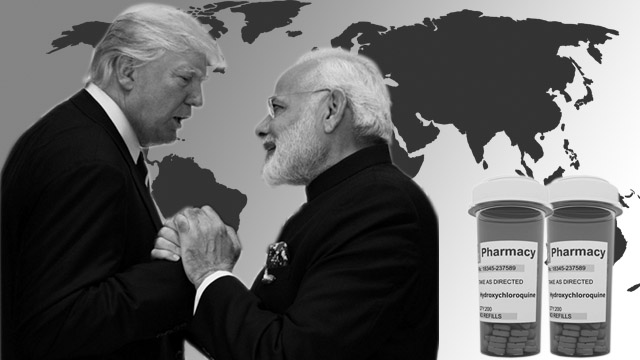 After the Coronavirus (COVID-19) outbreak has ravaged the US, President Donald Trump told the press that he has asked Indian Prime Minister Narendra Modi to ease restrictions on the export of hydroxychloroquine, which is considered as a key drug in treating COVID-19, and he asserted that there will be “retaliation” if Modi fails to oblige him. Trump’s “retaliation” threat didn’t have to wait for realisation, a servile Modi, who wears his hyper-masculine Hindu nationalism on his sleeves, obliged. Though there are questions raised over Modi’s utmost cowardice and servility, and though many toady television anchors and sycophants of the regime have come forward to defend Modi’s act as one of helping another country in need, some key questions over hydroxychloroquine is ignored.

Earlier, Trump announced that hydroxychloroquine has shown positive results in treating COVID-19. The hydroxychloroquine is a variety of chloroquine or quinine — one of the oldest and best-known anti-malarial drugs — but with lesser side-effects and it’s considered tolerable. It’s a Schedule H Drug, which can be only purchased on a prescription from a doctor. As malaria is non-existent in the US, the hydroxychloroquine isn’t manufactured there, while as a hotbed of malaria, India produces 70% of the world’s hydroxychloroquine. The drug is also used for Rheumatoid arthritis by orthopaedics. Since Trump’s announcement, there has been an acute shortage of the drug in the US.

The irony is, when Trump announced the usage of hydroxychloroquine for the treatment of COVID-19, he didn’t refer to the Food and Drug Authority’s (FDA) findings, as should be the case. He relied on the findings of the Chinese, who used the chloroquine and found better results in treating the patients with COVID-19. The FDA didn’t recommend the usage of hydroxychloroquine for treating the COVID-19 infection in the first place. Chloroquine is an immunosuppressive drug and its usage in virology had not a very impressive record. But the Chinese conducted some research and clinical trial to arrive at a conclusion of using it.

A paper titled “Breakthrough: Chloroquine phosphate has shown apparent efficacy in treatment of COVID-19 associated pneumonia in clinical studies” by Jianjun Gao, Department of Pharmacology, School of Pharmacy, Qingdao University, Qingdao, Shandong, China,  Zhenxue Tian and Xu Yang from the Department of Pharmacy, Qingdao Municipal Hospital, Qingdao, China, says “results from more than 100 patients have demonstrated that chloroquine phosphate is superior to the control treatment in inhibiting the exacerbation of pneumonia, improving lung imaging findings, promoting a virus-negative conversion, and shortening the disease course”. Following this Chinese finding, French researchers Philippe Colson, Jean-Marc Rolain, Jean-Christophe Lagier, Philippe Brouqui and Didier Raoult published a paper titled “Chloroquine and hydroxychloroquine as available weapons to fight COVID-19” in the International Journal of Antimicrobial Agents, in which they agreed to the findings on the basis of small scale clinical trial.

However, according to scientist Swapan Chatterjee, it’s a misconception and is driven by an obnoxious American imperialistic agenda. While speaking to People’s Review on the issue of the Modi regime allowing the export of hydroxychloroquine, Chatterjee asserted that he has been raising the issue since March that the hydroxychloroquine is an immunosuppressive drug and can cause severe cardiac repercussions. He said the American Heart Association has earlier warned regarding the usage of hydroxychloroquine. He said that there have been no credible clinical trials on the effects of hydroxychloroquine in the case of COVID-19 and though a drug can be recommended on a fast-track basis, in view of an exigency, that can be done only after randomised “aggressive medical trials”, which scientists should do and then recommend any drug to the FDA.

On the Chinese clinical trial cited about, Chatterjee said that while treating virus-related diseases, especially any influenza, the strategy is to control the symptoms and prolong the survival of the patient, through medicines, so that the virus can’t replicate and, therefore, it will be automatically annihilated. He said though hydroxychloroquine can cause this prolongation, there are apprehensions that it will have severe cardio-vascular impacts on many patients. Especially, when Hydroxychloroquine-Azithromycin is used. The American College of Cardiology has also released a paper, “Ventricular Arrhythmia Risk Due to Hydroxychloroquine-Azithromycin Treatment For COVID-19”, on March 20th 2020, which expressed apprehensions over the usage of the drug.

But as Trump exhibits sheer arrogance in demanding India’s compliance, which forces Modi to please his government’s biggest imperialist patron with relaxation on the hydroxychloroquine exports, citing humanitarian reasons to hide his ignominy, Chatterjee sees a different game going behind the scene. He cited reports the US pharma giants like Bayer, Novartis, Mylan and Teva have already started making millions of hydroxychloroquine tablets as it was not manufactured earlier in the US due to the non-existence of Malaria. But more than these, Chatterjee accused Trump’s personal financial interests in hydroxychloroquine as he has investments in one of the firms making it.

Going deeper into the issue, Chatterjee said that the Modi regime isn’t selling tablets to the US, but the sovereignty of India. He cited the example of Mylan, which is the top-ranking American generic drug maker. Mylan entered India in the late 2000s after acquiring a small Indian pharma company in Hyderabad. Within years it acquired 21 Indian pharma companies. After Mylan strengthened its grip on the Indian pharma industry, the US patent drug major Pfizer, which falsified a claim of finding a vaccine of COVID-19 in early March 2020 to raise its stock prices, merged its off-patent drug unit with Mylan. Being an innovator patent drug maker, why Pfizer was too keen to merge its off-patent drug unit with Mylan, a generic drug maker?

Chatterjee said that “the US sent a local hoodlum Mylan to win territory for it at the beginning, once it has done so, the gangster Pfizer entered the Indian generic medicine market.” He said as most patents are off and due to a lack of innovative drugs most of the medicines are now in the generic category, the foreign pharma giants are keen to capture this market and establish a monopoly. He said that a book, titled “A Bottle of Lies”, written by Katherine Eban, was released in August 2019. In this 500-page book, Eban accused the Indian generic drug makers, along with the Chinese, of fiddling with the FDA standards by adopting corrupt practices. It was an attempt, Chatterjee accused, to pave the way for the American corporations to rule over the generic drug territory.

Mylan, Chatterjee alleged, cancelled all holidays of its staff in India after Trump singled out hydroxychloroquine to fight COVID-19 in the US. He said once Mylan is ready with its hydroxychloroquine supply, Trump will stop importing from the other Indian companies and kick them out of the US market. This will kill the domestic pharma industry, which is already suffering due to the unhindered aggression of the US pharma companies. He said the Indian pharma industry will suffer the fate of former giants like Ranbaxy or Dr Reddy’s Laboratories. Now that the Americans are taking the active pharmaceutical ingredient (API) from India for the hydroxychloroquine it will harm India a lot. The lack of hydroxychloroquine API will eventually cause a severe problem for Indian pharma industry and will also jeopardise the lives of millions of patients suffering from malaria, Rheumatoid arthritis, etc, which will cause immense problems for medical professionals as they won’t be able to save lives. Already, the state-owned companies like Bengal Chemicals are running out of stock for hydroxychloroquine and the tablet is not available in any prominent pharmacist’s outlet in a metropolitan city like Kolkata. Such an ominous crisis due to the unavailability of the drug throws a big question over India’s medical security.

Modi’s servility towards the US president’s imperialist threats and muscle-flexing is quintessential of a representative of the Indian big crony-comprador capitalists. No Indian prime minister would’ve dared to oppose an American president. Even Indira Gandhi could dare to ignore the US’s warnings on attacking Pakistan in 1971, which led to the steaming of the US’s Seventh Fleet towards India because she had an unwavering commitment from her masters in Moscow at that point in time, which shielded her autocratic regime from the aggression of the American imperialist onslaught. However, through the import of the hydroxychloroquine API, Trump is actually going to earn profits from his own investments while jeopardising the lives of many Americans and he will also jeopardise the medical security of India as it remains a haven of malaria. Expecting Modi or his sycophants, who survive on the trickled down crumbs of the White House, to act in favour of India’s sovereignty is a fancy wish. The American and western neo-colonial grip on India has tightened manifold under Modi’s rule and no wonder he remains a favourite of the western imperialism due to his ability to wear a nationalist cloak even after selling India’s sovereignty and dignity so efficiently.