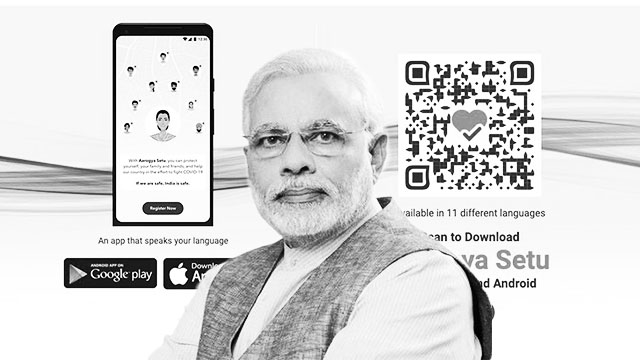 The BJP has been incessantly marketing Prime Minister Narendra Modi’s government’s steps to curb the COVID-19, especially through the usage of the contentious Aarogya Setu App, and both the Party and the government promote the App as an effective tool against COVID-19. A Right to Information (RTI) query showed that the Modi regime has spent Rs 41.9m between May and July 2020 on the publicity of the obscure Aarogya Setu App.

The App shows the presence of COVID-19 positive patients in the vicinity of a user, using GPS data. The Modi regime claims that Aarogya Setu App will safeguard one from getting infected by warning them about COVID-19 positive people in their vicinity. If this was the case, then why didn’t these Union ministers, including Union Home Minister Shah, use the App to safeguard themselves? How did they catch the infection?

All ministers of Modi’s cabinet, including Irani, have been promoting the Aarogya Setu App as a weapon against the COVID-19 pandemic. They have been claiming that the usage of the App––accused of being a surveillance tool for the state to snoop into people’s phones and trace their locations, breaching privacy––will prevent one from contacting COVID-19.

If that’s the case, then did Irani and other ministers of Modi’s cabinet or the BJP leaders from the states, had Aarogya Setu App installed? Or did they evade the installation and simply delivered the sermon to the people? Or did they install the App and it never worked?

India’s COVID-19 response has been a disastrous one since the very beginning. As the number of active infections hovers at 603,687 while writing this article, with 120,527 deaths, there has been a lot of questions raised on Modi’s approach towards the threat, to combat which, at the nascent stage, he declared a three-month-long repressive lockdown in March. Questions are again raised now regarding the Aarogya SetuApp. Is the Aarogya Setu App effective as an alarm against the COVID-19? Can it protect people from getting infected? Why couldn’t it protect the BJP’s rank and file from COVID-19?

A controversy is sparked recently after the Ministry of Electronics and IT (MeitY), National E-Governance Division (NeGD) and the National Informatics Centre (NIC) denied knowledge of who created the controversial Aarogya Setu App, when a plaintiff filed an RTI query asking who developed the app, how the data is stored and shared. The denial of information by the MeitY and the bodies like NeGD and NIC irked the Central Information Commission (CIC), which reprimanded the trio.

According to a report in The Hindu, dated October 28th 2020, “The CIC termed the response as “preposterous” and issued a show-cause notice to the NIC to explain why a penalty under the RTI Act should not be slapped on it for “prima facie obstruction of information and providing an evasive reply”.” Ironically, the Aarogya Setu App’s website claims it’s designed and developed by the NIC and the MeitY. The Modi regime, while attempting to dodge the ignominy caused by the incident, has taken punitive actions against government officials without shouldering any responsibility for this obstructionist policy.

Though the MeitY and NIC started a damage-control operation over this RTI fiasco, the major concerns of data privacy and the real agenda behind the Aarogya Setu App resurfaced. The inability of the MeitY and NIC to answer the questions raised in the RTI query shows a shallow depth in the credentials of the App. Why would the government not know about the platform it has created to fight against the pandemic? Why would the government not come clear on facts regarding the App, which it has made an open-source program? The reluctance can be traced to the obnoxious agenda behind the conceptualisation of the Aarogya Setu App.

The Aarogya Setu App is another piece of program that serves Modi’s gargantuan snooping agenda. The Modi regime has a fetish of snooping on people and using the pandemic, it has cajoled many smartphone users to install the App. However, rather than safeguarding the users through this program, a system is developed to store data of individuals for six months, including their location. According to the Privacy Policy of the App, details like name, phone number, age, gender, profession and countries visited are captured and shared with the servers. This data is accessible by different government bodies and agencies.

The MeitY Order no: 2(10)/2020-CLeS, issued on May 11th 2020, allows the data from Aarogya Setu App to be stored for 180 days and to be shared with different or even all government departments. Even it can be accessed for research purposes, which may violate the privacy of the individuals. While such accusations have been levelled, time again, against the Aarogya Setu App, the Modi regime defended it. The government has forced thousands of smartphone users, travelling in trains or taking flights to download the App, and forced it on people without their consent. But the App saved none.

While the Technical FAQs of the Aarogya Setu App does provide a detailed description of why it’s hack-proof, and the Government of India has declared a bounty on bug reporting for the App, the real threat isn’t posed by hackers stealing the data of the users, but the government misusing it to serve its snooping fetish. This will allow the Modi regime in building a large database of individuals using their medical history and socio-economic conditions and, in case the same data is sold out to corporates, they will use it to market their products effectively.

Rather than building a movement against the concept of collecting citizen’s private information under the draconian Disaster Management Act, 2005, the opposition accused the Aarogya Setu App of being vulnerable to hacking and data theft, without letting the people know that the biggest data theft is done by the government to farther its agenda at all levels. The political myopia of the mainstream opposition prevented the building of a massive movement against the App and its snooping program.

It’s clear, the Aarogya Setu App will not protect anyone from COVID-19, especially in the unlock period when there are no restrictions at the grassroots. Rather, it will continue to aid the Modi regime and the BJP in building a database that will help them politically as well as help their corporate sponsors with big-time marketing activities. To rescue the people from this trap, a massive movement against the Modi regime’s snooping fetish is needed along with the demand to scrap such apps and data collection programs. Also, it’s imperative to demand the deletion of all private data that infringe the right to privacy from government servers.

Only such movements can raise the digital literacy standard of the common people and make them aware against the government’s conspiracies, enabling them to evade the trap and demand the formulation of pro-people data security and privacy law, which will safeguard the people’s right to privacy. Until then, the flaws, hollowness and sheer inefficiency of the Aarogya Setu App must be highlighted, especially the case of Union ministers like Irani, to ensure that the people seek answers from the Modi regime and thwart its attempts to seize control of people’s lives.