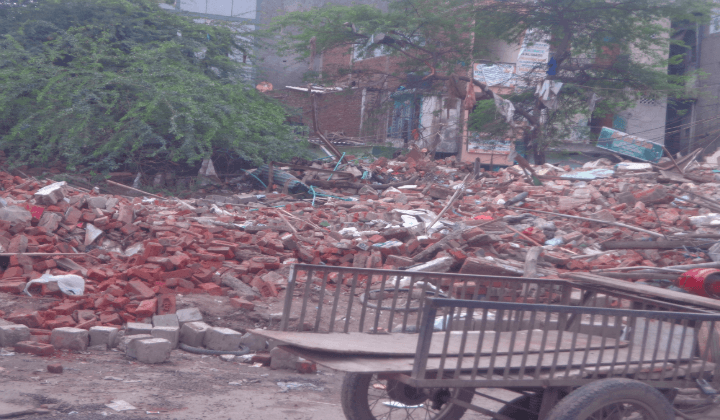 The Delhi government led by the AAP and the Central government led by the BJP are hand-in-gloves in their endeavour to push poor people out of their homes throughout the capital city. Under the garb of promoting metro rail connectivity the two often warring governments and their forces are demolishing the houses and settlements of the poor people throughout the city. DUSIB, an agency of the Delhi government along with the Delhi Police and paramilitary forces under the BJP led union government jointly launched a citywide demolition drive targeting the slum dwellers of the capital city.

Late June, the DUSIB demolished 80 houses in the JJ cluster of Mahatma Gandhi Camp near Najafgarh drain of Punjabi Bagh area of Delhi. Out of which 55 families were given rehabilitation in a shanty place at Najafgarh Road in lieu of a one-time payment of Rs 143,000 from non-Dalits and Rs 31,000 from Dalit families. However, according to the same scheme of rehabilitation, the Dalits should have paid Rs 1,000 and the non-Dalits Rs 60,000 for the alternative houses that the government agency  was supposed to provide them. The sum of Rs 60,000 was supposed to be paid in equal instalments for 10 years after availing the house under the programme. The DUSIB overruled the guidelines and overcharged people that too through an upfront payment, which many could not arrange.

Around 14 people of the 55 provided accommodation could not pay the amount even when the last date was 8th July. The utmost poverty of these daily wage earner families became a barrier for these people to arrange the huge sum demanded by the government agencies. The 25 families that never got lucky for rehabilitation does not have their names on the voter roll of 2012 in the constituency  and hence got no help from their local MLA, Girish Soni of the AAP. The MLA refused to meet them or lend an ear to their problems at all. In the midst of rain, these people are stranded without a roof over their heads.

Since 12th July, hundreds of CRPF and Delhi Police personnel surrounded the Muslim ghetto near the main road of Batla House area of South Delhi’s Okhla and demolished several shops and houses of poor people at gunpoint using JCB machines. The entire area was cordoned off and the people were prohibited from forming any resistance group by a heavily armed contingent of security forces. In the midst of rain, people were thrown out of their houses under the open sky and the protesters were baton charged when they demanded compensation and a halt of the aggressive bulldozing. Journalists were prohibited from covering the event by the hoodlums hired by the government agencies who even tried to molest women activists trying to raise the demand for adequate compensation for the losses to the livelihood of the affected people and their proper rehabilitation at the expense of the government. The largely Muslim population was forcefully muted by the same united front of Modi and Kejriwal, who came together in a unique show of unity to dislodge poor people from their houses and livelihood in favour of the big monopoly capital.

The demolition exercise of Batla House turned the area into a military fortress with photography banned and a large troop buildup. The people stranded in the rain were even denied basic amenities like a toilet and any provision for food or lodging. The timing was proper as the most of the students of Jamia Milia Islamia University, who play a key role in fighting for the rights of the local people, often demonised by the Hindutva corporate media, are on Eid holidays. Taking the opportunity of a vacuum in the opposition space the AAP and the BJP government launched this barbaric assault on the people of Okhla.

In the meantime, the JCB machines of the DUSIB with fire and muscle power of the Delhi Police pounded upon the slum dwellers of Kirti Nagar’s Jawahar Camp area. Numerous houses were demolished and the police threw several poor families out of their shanty settlements during heavy rain. The police and the DUSIB along with the local musclemen provided by the AAP and RSS ensured that the poor people are prevented from organising any resistance struggle.

Social activists filed petition in the Delhi High Court against the ongoing demolitions and got stay order for only one out of the three slums under DUSIB’s JCB radar. However, even after the stay, which looks like a temporary halt, the government and its forces will find out other avenues to demolish the houses due to the perks offered by the Japanese and Korean monopoly capital that funds the metro railway of Delhi.

The city of Delhi is a hub of foreign monopoly capital investment in infrastructure and real estate projects since the late 1990s and this has displaced thousands of poor people before and after the monstrous Common Wealth Games of 2010, when the poor were curtained by a government that wanted to show a posh and globalised Delhi with a large population of servile elite and middle-class people to the international community. The neighbourhoods of Najafgarh, Bawana, and other corners of Delhi filled with migrants of displacement. The Arvind Kejriwal-led AAP, which works as a shock absorber for the foreign and domestic corporate lobby in the political scenario raised the issues of the poor people of Delhi to win a landmark election in the city. However, within weeks of its establishment, the party and its tyrant leader cum Chief Minister showed the real shade of their skin when they started adopting the same economic policies that the Congress and the BJP have advocated for years.

The dissenting people who are protesting against the atrocities of the government are being targeted by the RSS-BJP regime and its servile Delhi Police and are arrested indiscriminately all over the town. Due to disunity among different forces fighting for the cause of the displaced people, including some corporate-funded NGOs, the struggle against displacement is not getting streamlined. The lack of a concerted movement against the atrocious regime and its different wings is empowering the latter to bolster its campaign to bring havoc in the lives of the poor.  The solution of the problem does not lies in seeking legal cover from the state machinery, rather by building up intense masa struggle to paralyse the economy of the region to force the ruling classes to retreat from the aggressive path and seek a rapprochement with the poor people affected by the demolition exercises. The state machinery must be forced to rehabilitate everyone affected by the demolition drive without disturbing their livelihood.