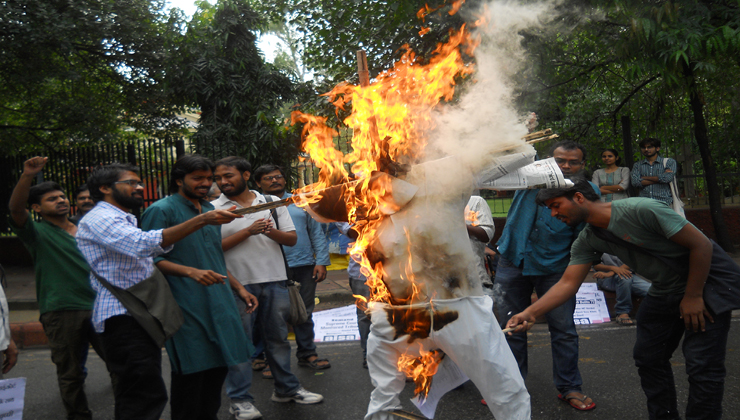 (This article was first published in August 2015 in the previous version of People’s Review. Due to an incident of hacking the old website was pulled down and we could only restore the old articles in this section)

The fields of Bihar were crimsoned since centuries with the blood of the poor and downtrodden peasants, mostly from the oppressed castes and communities. Since the days of the early 1970’s, when the Naxalbari influenced peasants rebellion found firm grip in the feudal heartlands of Bihar, the province experienced numerous incidents of atrocities committed by the feudal landlords of the upper castes, especially the Brahmins, Rajputs, and Bhumihars, against the poor and landless peasants of the Dalit community.

The peasantry of Bihar rose under the militant leadership of various communist and left organisations, demanding land rights, social and political dignity, and started fighting to shape their own destiny through their collective efforts. The caste politics players, starting from Lalu Prasad Yadav, Nitish Kumar, Ramvilas Paswan, communal political players like Sushil Modi and his coterie, started seeing red in the arousal of the peasantry, the Dalits and the tribal people of Bihar. The demand for land rights, the demands for social equality, justice, education, health and other basic rights along with the right to live with dignity, free from the vindictive feudal regime, was too much for the ruling political blocks to tolerate.

They pressed into service their own henchmen to carry on horrible genocides in the villages of Bihar, by massacring the Dalit peasants, burning down their huts, raping their women, and above all instilling fear in their heart for the upper castes, so that the Dalit people across the state shiver with the terror of the upper caste feudal lords and dare not to speak against their hegemony, leave alone placing demands for socio-economic equality.

During the mid 1990’s Bihar witnessed one after another massacres committed by the Ranveer Sena, a quasi military organisation of the feudal landlords of the upper castes formed to butcher the oppressed Dalit people. The massacres of Jehanabad became national headlines and the state government, ruled by the ‘messiah’ of the poor, Lalu Yadav, remained a silent spectator to the incidents. Later, reluctantly, the state pressed charges against few of the Ranveer Sena activists, who were later acquitted by the lower courts as well as the Patna High court under mysterious circumstances. The Ranveer Sena too rechristened itself into Akhil Bharatiya Rashtravadi Kisan Sangathan, an accomplice of the upper caste Hindu fascist political forces of the province led by the RSS and the BJP.

Recently, Cobra Post carried on a sting operation named “Black Rain” on the massacres committed by the Ranveer Sena. While following up with those accused who were released by the court without any proper prosecution, many horrific facts came out in light. The six Ranveer Sena men are Chandkeshwar, Ravindra Chaudhary, Pramod Singh, Bhola Singh, Arvind Kumar Singh, and Siddhnath Singh. As their names suggest, they are all from the upper castes of the feudal society of Bihar.

The acquitted Sena activists claimed proudly that they killed the Dalit people, they described in a casual way how they murdered the women and children and moreover they disclosed their links with the political heavyweights of the present ruling party of the country, the BJP, as well as the ex Prime Minister Chandrashekhar, the man who helped the US air force with fuel during its war of aggression against Iraq.

The scrapping of the Justice Amir Das Commission of Inquiry abruptly by the JDU-BJP alliance after forming government was quite well expected by the people of Bihar. First time in the history of the nation since 1947, an inquiry commission investigating massacres was asked to demit office.

The Ranveer Sena activists told the Cobra Post that they received the army junks from government sources, through Surya Dev, an accomplice of Chandrashekhar, and their forces were trained by Indian military personnel and the Purulia arms drop done in mid 1990’s had done them a great service as they could gather and use such sophisticated weapons like LMG, Mauser, SLR against the unarmed Dalit people.

During all these talks and shameless gloating on the massacres and atrocities, these feudal foot soldiers expressed their deep hatred against those peasants who rose up against the caste authority of the Brahmins, Rajputs, Bhumihaars and other upper castes. Their hatred for the peasants who refused to do remain bonded labour and provide the landlords with free labour was manifested in their rejoicing the massacres.

On the involvement of the well known politicians of the BJP, like C.P. Thakur, and others, Justice (Retd) Das, the head of the commission inquiring the ghastly terrorist acts, commented to Cobrapost: “I can tell some names, for instance, Shivanand Tiwary, C.P. Thakur, Murli Manohar Joshi and Sushil Kumar Modi. Then there was a head of a village in the neighbourhood of Laxmanpur Bathe about whom we had drawn the conclusion that he too supported [the Ranveer sena]”

The whole interview series can be viewed by visiting this link:

No wonder, today all parties of the Bihar polity, especially the BJP and the Janta outfits, will try to rubbish the claims of these Ranveer Sena men, who were clearly visible admitting to the crime and describing the nexus between the politicians of the BJP and other Janta outfits and the private army of the feudal lords. The role played by the likes of Chandrashekhar, Yashwant Sinha, etc are downplayed by their kins and coterie. Yet, no one will disagree that these people in the high ranks of politics of India, takes high pride in their caste origin and their political career is always based upon their caste allegiance.

The country in which the oppressed castes are always despised by those of the upper castes, be it for not providing free labour, or for the Dalit students getting an opportunity to study in institutes of higher education, the news of the Cobrapost sting will not affect the national conscience as a cricket match will. Because the massacres of the past are not factors that can increase the TRP of the corporate controlled media and it will rather work overtime to divert the attention of the people from these real incidents, the allegations against the politicians of the ruling party, and keep them busy with the nincompoop actions of some self proclaimed ‘god mother’.