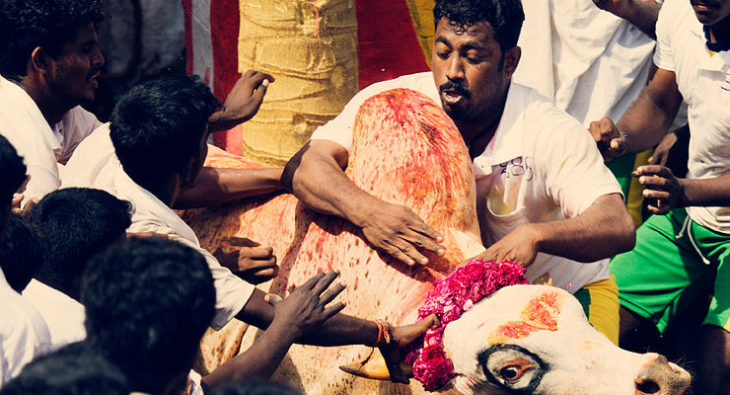 The entire Tamil mainstream corporate media is busy covering the protests and outrage across Tamil Nadu and in the capital city Chennai against the Jallikattu ban. The national mainstream corporate media is not lagging behind as well. GBs of data and tonnes of newsprint later the story is still making rounds with Chief Minister O. Panneerselvam throwing his weight behind the protesters as well as DMK leader Stalin’s support to the protests.

Sub-layered under the roar of mass demand to lift the Jallikattu ban, the traditional bull taming game of the Tamil people during the harvest festival Pongal, the issue of a tragic drought caused by the water shortage due to the inadequate water released in the Cauvery is completely forgotten or to put it in a different way – the people were forced to overlook it.

According to the Tamil Nadu Farmers’ Association, at least 144 farmers had killed themselves between October to December in the state, which the government is vehemently denying to prevent paying compensation to the families of the deceased and to avert facing the barrage of opposition.

The Chief Minister presented a half-heartedly drawn compensation package for the distressed farmers, promising the farmers who suffered 33% crop loss Rs 5,465 per acre, while for long-term crops the promised sum will be Rs 7,287 per acre, and for other crops Rs 3,000 per acre.

These meagre amounts of compensation can neither help the farmers to cope with the huge financial repercussions on their lives caused by the crop failure, nor the promise of increasing loan tenures can be of any help to the small and marginal farmers due to their dependence on local unscrupulous money lenders for loans.

The poor banking support to the farmers and the forced demonetisation exercise extracted every drop of life and hope from the farmers of the state where a huge amount of money is poured by the politicians to keep the agitation against the Jallikattu ban alive to use it as a smoke screen and escape the grilling on the drought distress.

The Jallikattu ban will eventually trouble those farmers again as in a state where the sale of cattle for slaughter is banned, the farmers in distress used to sell off their indigenous breed bulls and earn some money during the Pongal season. However, with the ban imposed on the traditional sport, the sale of indigenous bulls will see a steady decline and will give rise to the imported cattle from Western countries and Australia, which will eventually be a catastrophic event for the farmers of the state.

Tamil Nadu, alike other states of India, doesn’t have any scientific plan and any distress management system in place to handle the crop failures caused by the bad monsoon. Even in the 21st century, when the Indian government is asserting its zeal to be a superpower on a global scale and to transform Indian economy into a cashless economy by using people-centric technology, farming, the principal occupation of the majority of the country, still remains weather dependent due to lack of proper irrigation mechanism and lack of scientific research to boost its fortune.