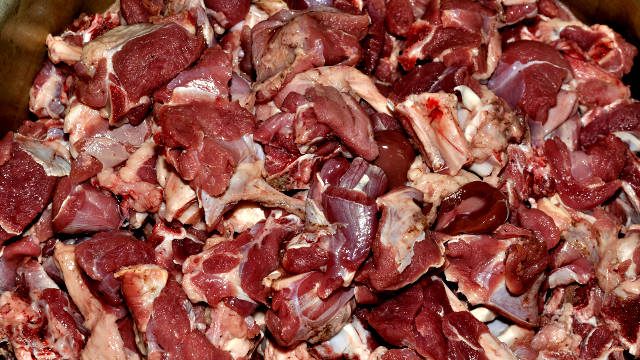 Few weeks ago, the issue of carcass meat sourced from the garbage dumps of Kolkata and suburbs has captured the public discourse due to the extensive media coverage the issue has got and the amount of terror it could spread down the spine of the people of Kolkata and other cities of West Bengal. The revelation of the supply of carcass meat to the restaurants and hotels by a ring of unscrupulous elements has panicked the middle-class and the elites so much that they have given up eating meat products out, which is affecting the livelihood of thousands of people connected with meat trade, restaurant and cooked food business. The demand for fish and vegetables has increased substantially in the past few days, while only freshly culled chicken is selling in the city, as people aren’t buying packed chicken, ham or other meat products.

According to media reports, Biswanath Garai (52), a resident of Sonarpur in South 24 Parganas, was arrested for supplying rotten meat of carcass to hotels and restaurants by packing it with fresh meat. The police have busted a racket of criminals who have been supplying carcass meat of cow, pig, cat and dog after treating with chemicals like calcium propionate (food preservative), aluminium sulphate and lead sulphate (toxic chemicals used to contain rotting and to suppress the foul smell). It’s said that the police has recovered 20 tonnes of carcass meat stored in cold freezer. Kolkata was shaken by this revelation and a panic overtook the city, which caused at least 30 per cent downfall in the business of restaurants and eateries, from the posh ones to the roadside street food joints.

Amidst the chaos on the carcass meat, the Bengali mainstream media houses are continuously fuelling the flames of carnophobia spreading to distant places of West Bengal. The incessant blitzkrieg on the issue of carcass meat and the blowing the issue out of proportion is causing great harm to the economy of West Bengal, as The Hotels and Restaurants Association of Eastern India (HRAEI) reported 30 per cent fall in business, which is seriously affecting the traders and their employees, especially the small traders. There are allegations that Ghorui and his men have sold 13,000 tonnes of carcass meat to the meat sellers of New Market and earned more than ₹6 crore every year. Though the police have not released any official statistics on the volume of this notorious scam, neither did it disclose how widespread the network is and which are the restaurants and hotels that are most affected, especially when most food joints, including the upscale eateries, source their meat from New Market.

The total darkness on the depth and volume of the crime is now allowing the rumour mongers to feed the popular imaginations with fabricated data, morphed pictures and fake news. When the news of the carcass meat broke out, the BJP started an enthusiastic campaign against meat trade, which peddled a very strong anti-Muslim vitriol, sublayered in the rhetoric of “health concern”. The continuous linking of the Muslim localities and their eateries with the scam, using fake images and fake news posts, intensified the panic. The mainstream media’s participation in this propaganda and the government’s reluctance to calm down the people and provide them with a transparent view into the facts is wreaking havoc on the meat traders, butchers and suppliers. A large section of Muslims, Dalits and tribal people may suffer unemployment if the panic on the unfounded ground continues any longer.

Kolkata, and for that matter West Bengal, is full of meat-lover Shakta Hindus who wouldn’t mind appeasing their taste buds by devouring tasty meat and fish-based dishes even on such occasions when their fellow North Indian or West Indian Hindus observe strict vegetarian diet plan, e.g. during the Navratri, celebrated as Durga Puja in West Bengal with much fanfare.

Converting the Bengali population to vegetarianism and thereby using their new-found, Hindified food habit to instigate them against the meat-eater Muslims has been a long-term plan of the RSS and its different progeny organisations, including its parliamentary arm, the BJP. However, the Bengali Hindus, alike their Bengali and Urdu-speaking Muslim counterparts living in the same state and cities, can’t be forcefully divorced from their most cherished food habit using religious propaganda.

Though the overwhelming majority of West Bengal, the poor peasants and workers, who belong to Dalit (Namasudra), tribal and Bengali-speaking Hindus, can’t afford two square meals a day and hence consumption of meat products is a distant dream for them. They have been forced to live on boiled rice and vegetables (even pulses are luxury) with little or no spice or oil, but still, they will love devouring meat, fish or poultry, provided they are given an opportunity to consume them. So, it’s always hard to make such a vivid, heterogeneous and dynamic population follow a food course dictated from Nagpur or Ahmedabad.

Under such circumstances, the RSS and its affiliates, majorly manned by the non-meat eater Marwari and Gujarati traders living in Kolkata and other cities of the state, were finding it difficult to impose vegetarianism on the state’s majority ever since they started spreading the Hindutva network in the state since the early 1990s. They did try with few god-men and women, who attempted to be proselytisers of vegetarianism and thereby influence their disciples to adopt a similar food habit. However, an alien practice like vegetarianism made them majorly unpopular in West Bengal and that path of converting the state’s majority into vegetarianism failed as well.

The RSS’ infamous beef politics couldn’t fetch much RoI in West Bengal, where a large chunk of Bengali middle-class Hindus tastes the “sinful” meat of a cow on special occasions by bringing cooked delicacies from restaurants of Muslim areas or eating in them. Plus, even if the Bengali Hindus are forced to give up on meat consumption, fish and poultry can’t be separated from the platters of the elite and middle class. This forced the saffron camp and its Marwari and Gujarati comprador sponsors to delve deep into the issue and search for a solution. They employed their lackey media houses and hired intelligentsia to resolve the issue and finally found the “health” issue, which could be used to trigger the panic bomb and then use the aversion to meat and meat products to promote the North Indian vegetarianism.

This plan was supported by the major corporate media houses, who, in lieu of handsome funding from the Marwari and Gujarati comprador thugs, hyped the case of carcass meat out of proportion and showed it as a general trend followed by all meat traders. The enthusiasm with which the BJP is using the feed of those media houses whom they call “sold-out” to hoist the banner of vegetarianism shows clearly that the carcass meat scam is more than a health hazard. It now appears more like a pre-planned conspiracy. Every day the fake news peddlers of the Sangh Parivar are showing doctored images and spreading rumours about dog meat, cow meat and cat meat found in different restaurants of West Bengal.

The hyperactive and self-righteous Bengali middle-class must rethink about what they have been fed by the corporate media houses, including the “most read newspaper” of West Bengal. They need to ask themselves, being practical, that if the scam was so severe, if all the meat they ate since their childhood was sourced from rotten carcass, then how come they are still surviving? How many animals die and are dumped in the garbage bins of the city every day and how much is the demand for meat in the hotel and restaurant industry? How come the meat of different animals couldn’t be distinguished by the hotel staff or even by the expert meat-eater Bengali community? How could a lot of meat rot in the hotels when the demand for meat and poultry products is high in upmarket eateries as well as pice hotels?

This new upheaval over carcass meat in Kolkata may have a root cause and a gang of criminals running a dirty trade. However, if this is used as an excuse to pave the way for the big foreign and Indian retail chains to start their “quality” meat product business, then millions of poor and middle-class meat and poultry traders of West Bengal, who have sold their customer 100% fresh meat and poultry since ages, will be rendered unemployed and it will weigh a havoc on the already distressed economy of the state. The people have experienced the odd incidents of adulteration in sweets, milk, high-level of mercury in fish, high amount of chemical toxin in vegetables, poisonous colours in spices, etc. in the past. However, none had the intensity and political connection like the incident of carcass meat. If West Bengal can’t ward off both the unscrupulous communal Hindutva elements trying to force vegetarianism on the state and the evil nexus between criminal elements, corporate media and corrupt government crooks who are peddling the fear of carcass meat, then it will not take long for the state to become another reactionary, vegan North Indian Hindified state. That future will be perilous for the existence of the Bengali community in India.