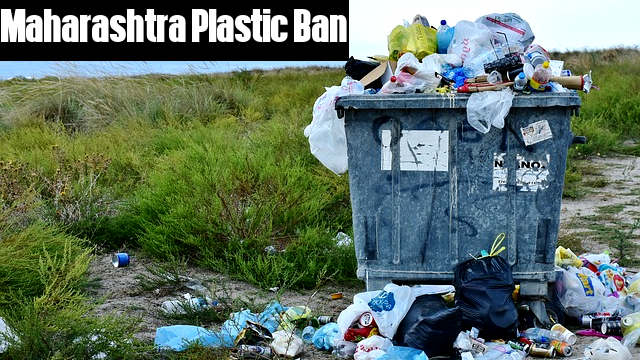 The Narendra Modi-led BJP government has done many stints since coming to power and almost all of the BJP-ruled states have followed the suit to match the pace of their New Delhi-based mentor. From granting cabinet minister status to Sadhus, a sect of Hindu religious leaders, by the Madhya Pradesh government to the building of cow shelters and care centres by the Rajasthan government at the cost of starving farmers, India saw a lot during the last four years. However, when one of the BJP-ruled states claim to go environment-friendly, by causing a severe blow to the state’s economy, then questions arise and answers are nowhere to be found. The recent plastic ban by the Maharashtra government is one such sudden “surgical strike” decision by Devendra Fadnavis-led BJP, which has brought a turmoil in the state.

Due to the recent plastic ban order, which was actually issued in March and had deadlines of doing away with plastic stock by 23 June 2018, more than 300,000 people of Maharashtra, mostly workers and small traders, will be left unemployed, which will affect nearly 1.5 million people who are dependent on them. Many plastic factories and traders will lose business and thereby a large amount of business loans given to them by banks will turn into NPAs and many of the small and medium traders may go bankrupt. The Devendra Fadnavis regime has not just banned the plastic carry bags, but also single-use disposable plastic items and thermocol items, like plates, glasses, spoon, forks, etc., which were mostly sold by small and middle-traders.

With nowhere to go and none to approach, many Mumbai-based traders have started challenging the fascist diktat by flouting the ban and by not paying the penalty. The plastic manufacturers and traders of Maharashtra and their unemployed workers have decided to battle the decision collectively, which has drawn the state’s ire against them. As most of the corporate houses are allowed to market their products in plastic or sell items that are made of plastic to the customers, the arbitrary ban that only affects the small and middle traders, manufacturers and owners of small and micro industries, along with the workers they used to employ shows clearly whose interests the BJP-led government is serving loyally.

When the BJP and the RSS keep supporting the plastic ban by showcasing it as a part of the endeavour of the saffron camp to save the environment, then most people would find it ridiculous. As a party that wants to interlink rivers and give a free playground to big corporate houses to build and operate dams, all at the cost of irreparable damage to the environment, ecosystem and natural habitats of wildlife, the BJP cannot vouch for the environment.

No political party in India, including the Congress, could collectively do as much damage to the environment, as much the BJP has done ever since it came to the national forefront during the 1990s. Acting as a lackey of the Indian big comprador capitalists like Tata, Reliance, Adani group, etc., the BJP has allowed total destruction of environment and ecosystem in all states that it ruled or is still ruling.

By signing the most devastating mining MoUs with big foreign and domestic mining corporations, which allows the latter to exploit the rich mineral reserve of India in Jharkhand and Chhattisgarh at a throwaway price by destroying the green cover of forests, by evicting tribals from their habitat, by blowing up mountains and by building big dams, the BJP has allowed the destruction of environment and the source of oxygen for the people of the country. The Maharashtra government of Devendra Fadnavis didn’t remain behind its counterparts.

With its project of building the Mumbai-Ahmedabad Bullet Train corridor, where millions of people will be evicted and greenery will be axed, with its project of a 200-metre-tall Shivaji statue in the Arabian Sea coastline costing ₹4,000 crore, which will destroy the maritime ecology of the region and deeply impact the fisherman communities, like the Kolis, the planned destruction of mangroves and the killing of the Powai Lake, etc. in its kitty, the BJP government of Maharashtra cannot enact this hoax show of saving the environment by suddenly banning plastic and pushing more than a million people into the realm of starvation.

Even when the government is banning the usage of plastic bags, it has adopted a double standard to save its corporate allies by allowing the sale of plastic packed consumer goods and food products sold by the big brands. All big corporate entities have the leverage to market their products by using plastic packaging, while the weaker sections of the traders, the plastic manufacturers of the state face the axe of the Devendra Fadnavis regime. This double standard by the BJP is a clear manifestation of its utmost hypocrisy over the environmental cause.

Plastic pollution is indeed a menace for the environment and with the advent of consumerist lifestyle, thanks to the neo-liberal economic order, plastic has become a killer agent like fossil fuel, all set to wipe life off the planet. However, to tackle the menace one needs to think beyond quick stints like banning of products and by-products. Even if a ban comes and is implemented with force, where is the guarantee that the plastic waste circulated so far in Maharashtra will be done away with and the state will have no trace of the past curse visible within its territory? The presence of plastic waste, electronic waste and other non-biodegradable waste throws a grave environmental challenge that can’t be resolved within a blink of eyelids.

To do away with the plastic waste and menace, the government should have first prepared a plan of transition from plastic to an environment-friendly option. What option can that be? Paper bags will be a bigger trouble as they will need more trees to fall to meet consumer demands. Reusable jute bags and materials prepared from biodegradable and environment-friendly raw materials can be an option for which the government should have had the small and middle traders and the manufacturers prepared by providing them technological and financial assistance to migrate. The working class would have benefitted by such a migration and the jute industry of India would have seen a boom after many years.

However, to expect the arch-reactionary and hardcore fascist organisation that lives on the alms provided by big comprador capitalists to work for the benefit of the poor and the lower middle-class is an infantile idea. The BJP government led by Devendra Fadnavis has banned plastic in Maharashtra so that the big corporate houses can flood the market with their high-priced alternatives and paper products with the routing of the small and medium traders. The Devendra Fadnavis government’s decision to ban plastic in Maharashtra is as much an anti-people and anti-environment decision, as much is the plastic pollution that the BJP has allowed to grow to a scale of menace until now.