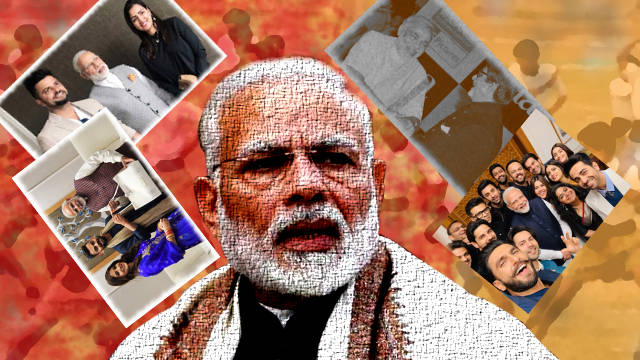 There are certain times in life when your entertainers don’t entertain but scare you through their performances or by their actions unrelated to entertainment. In Modi-fied India, the hyper-nationalist behaviour of celebrities from the world of entertainment and sports is quite traumatic for a large number of people. The fear gets stronger day after day, as these celebrities join hands with those notorious powers that are despised by the society and its sanest part.

Their servility to the pillars of power, their unapologetic display of bonhomie with those who are ruling the country with brute force, communal ignominy and dichotomy raise few just questions about their true intent.

Who are our multi-billionaire entertainers and sportspersons? Are they people’s entertainers and performers or are they mass influencers used as docile tools by those who want to create and manage public perception on popular issues? Is it necessary for the film actors, directors, musicians, cricketers, etc. to become stooges of the regime? Is loyalty towards the regime and its unapologetic bootlicking continue to be the sole criterion for them to stay ‘saleable’ in their respective markets?

After Indira Gandhi, no prime minister or central government could manage to wield as much influence over the film stars, sportspersons and media moguls as Narendra Modi did. His ultra-chauvinist, macho and ‘Virat Hindu’ image perched him in the hearts and minds of the key personalities among the Indian celebrities. The celebrities, who mostly come from upper-caste privileged backgrounds and in some cases- they are even born with the ticket to fame, connect well with Modi’s Hindutva fascist ideology.

It can’t be forgotten that the Hindi cinema industry is one of the largest commercial film industries in the world and it has served subsequent governments in peddling their ideology, especially in whitewashing their crimes by blaming those at the receiving end of injustice, violence and oppression. The Brahminical fascist and bigot character of the film industry revealed itself since the early 1990s when the Ram Mandir movement of the BJP was at its peak and the people of Kashmir were brutally massacred by a hyper-nationalist Indian occupation regime.

The Hindi film industry and its other upper-caste Hindu brethren subsidiaries started producing numerous films that projected the Muslims as the ‘other’, the brainwashed and radicalised terrorists trying to divide a very innocent, liberal, open and progressive India at the behest of Pakistan. More or less, much of the films during the 1990s and the 2000s were made on the same theme and they gradually started utilising the people’s frustration with the system’s incompetence, injustice, exploitation and corruption by promoting extra-judicial killings, police torture, military atrocities and everything else that can be sold using the label of ‘patriotism’.

Films like Roja, Sarfarosh, Gadar to A Wednesday, The Black Friday, Agent Vinod, or the recent films like Baby, Uri, etc., used an Islamophobic template that uses police stories, media trials and government propaganda as ingredients to spread xenophobia regarding the Muslim community and spread vitriol against them. Actors like Sunny Deol became synonymous to a Muslim-bashing good ‘Hindu’ soldier of ‘Mother India’. While there have been several films in the meantime that tried to mend the bridge and bust stereotypes, they didn’t find much acceptance with the audience, which is largely upper-caste Hindu elites and urban middle-class.

Nowadays TV  channels like Sony TV have been airing shows that are based on the RSS’ version of history. By portraying Mughals, Greeks and Muslims in general as villains of an ‘ancient India’ that existed beyond history, US-controlled TV channels, collaborating shamelessly with the RSS, are trying to build up a favourable opinion on behalf of the notorious Hindutva agenda in the susceptible upper-caste Hindu minds. They are trying to raise a generation of semi-baked minds that will be guided by propaganda packaged as history and will become zealots in the process.

In cricket, India’s most watched sports-cum-religion, the TRP earner is a match between India and Pakistan, which turns out into an occasion of Muslim loathing under the garb of Pakistan bashing by the major section of the Indian cricket fans who come from upper-caste Hindu elite or urban middle-class background. The hatred spewed through the much-commercialised game where each player is owned by multiple big foreign corporations and their Indian comprador-crony lackeys, who play less for the love of the game and more for money and fame, toxified the Indian sports scenario in the years since the 1980s.

For several anti-Muslim riots and violence, the Hindutva fascist RSS and its progeny have used the cliche of Muslims supporting Pakistan against India as an excuse. The Hindutva fascist terrorists have always legitimised their dehumanising of Muslims by blaming them of supporting Pakistan during cricket matches. The anti-Muslim vitriol is spread using the context of Pakistan so that it could incite hysteric mobs to lynch hapless poor Muslims.

Narendra Modi, as part of the RSS, the BJP and the Gujarat and Indian governments, still remains a part of this sordid nexus of anti-Muslim forces and the blood of the innocent Muslims of Gujarat, Muzaffarnagar, Kashmir and many other places still drizzle from his wrists. He is the leader of the organisation that violates the human rights of Muslims, Christians, Dalits, tribal people and other marginal communities and only secures votes through communal polarisation.

Films are made in abundance to hype the agenda of the ruling BJP and the RSS. From Toilet- Ek Prem Katha, Buddha in a Traffic Jam to films like Uri and The Accidental Prime Minister, everywhere the signs of BJP’s propaganda and opinion-shaping are very clear. If this wasn’t enough, sycophants of the Modi regime in the Bollywood are making an eponymous film on him featuring a hardcore Hindutva fanatic Vivek Oberoi.

The glorification of Hindutva fascism is also done by eulogising the Hindutva thug and rabble-rouser Bal Thackeray of the Shiv Sena by making a film that will eulogise him. Ironically, the main role is done by a Muslim actor – Nawazuddin Siddiqui. Throughout his lifetime, the Muslim community had been loathed in Bal Thackeray’s speeches and butchered by his henchmen.

It can be said that the filmmakers have the freedom to express themselves and thus, they’re making films that project Narendra Modi or Bal Thackeray in positive lights. This, unfortunately, is not the case. Films that are critical of the Modi regime or the Hindutva fascist ideology face the heat of the censor board.

Even if some gets through, the RSS-led Hindutva fascist family takes to the street to oppose the screening of the films through vandalism. Mere fictional stories like Padmaavat that reduce a woman to her vagina, also faced severe countrywide rampaging by bloodthirsty hyenas unleashed by the Sangh Parivar to uphold the caste glory of the Rajputs.

A film called Sameer that depicts the dirty truth about communalism from a Gandhist point-of-view, had to face the scissors at the censor board for merely showing the BJP’s flag, while throughout the film The Accidental Prime Minister, the Congress’ name, real characters and the party’s banners were shown without any hindrance. Why there is a double standard regarding the ‘freedom of expression’? It’s because a film that has a Sangh agenda embedded in it, gets default support from the censor board and the political establishment, while which opposes that very agenda, gets canned.

Cricketers with a massive fan following have been promoting Narendra Modi out of their sheer Islamophobic and Brahminical outlook. Many national cricketers and former cricketers have been lambasting the opposition, promoting Modi’s propaganda over demonetisation, GST, etc. and have been found posting selfies with the megalomaniac prime minister on social media by claiming that they were proud to have met him. The usual adjectives to magnify Modi’s stature and popularity, which is fast falling among the exploited and the oppressed people, continue without any period.

Many ex-cricketers and current cricketers have been wearing their ‘Hindu patriotism’ on their sleeves and are demanding genocide of Kashmiri people, criticising women who protest against Modi’s xenophobic propaganda or are asking people who don’t like the Indian Cricket Team to be thrown out of the country.

This sheer arrogance, aggressiveness and vitriol are directly sponsored by the RSS, as these cricketers, who have sold their jersey too in instalments to big corporations, can’t endorse or oppose anything unless they are paid for it. Thus, the hyper-masculine chauvinism exhibited by these parasitic class of India has no other content than the fact that someone is fuelling their tank and turning them into paid trolls and keyboard warriors of the regime.

By deploying a large number of film artists, filmmakers, singers, musicians, cricketers, sportspersons, and other major mass influencers as their unofficial mouthpieces, the BJP and its IT Cell have really delivered a masterstroke as these influencers do command large fan following on social media and in real life, and they are now misusing their influence to carry out propaganda on behalf of the BJP and the RSS.

The recent rush shown by multiple Bollywood actors to click a selfie with Narendra Modi is not an impetuous act, rather, like their participation in the Shalom Bollywood event, where the bigwigs of the Hindi film industry greeted and hugged the Zionist terrorist and mass murderer Benjamin Netanyahu, this too is a politically calculated and very well-planned move to endorse the BJP before the general election. Especially at a time when the Bollywood is undergoing a spree to produce films that glorify the role of the BJP and Narendra Modi in ‘reshaping India’.

When former and present cricketers show their arrogance on and off-field and dare to abuse the people of the country with their chauvinist jargons and cliches, then it’s a sign that they’re on the payrolls of the utmost fascist and anti-democratic Hindutva fascist regime, which is using these people to normalise violence, hatred and bigotry.

For the greater good of society, it’s imperative that we judge our celebrities and rank them according to their socio-political behaviour as well. Those nincompoops who support the rape of an 8-year-old girl because of her religion or resort to whataboutery when people question the sudden upsurge of mob lynchings in the name of cow protection or communalism must be identified, stamped and isolated from the sphere of influence.

It’s a shame to have such people on the pedestal of celebrityhood who have no regards for human rights, lives of people and the Constitution of the country. Alike their Hindutva fascist masters, these parasitic classes of wealthy bootlickers of the regime must be swept away from the public space of India, which exclusively belongs to them who support the people’s democratic rights, progress, peace and equality. If there is a political will to fight the Hindutva fascist Modi regime, then there must be a political will to also expose and isolate these bunch of feckless stooges of Hindutva fascism who are good only in serving guests at the wedding venue of a big comprador and crony capitalist’s child.