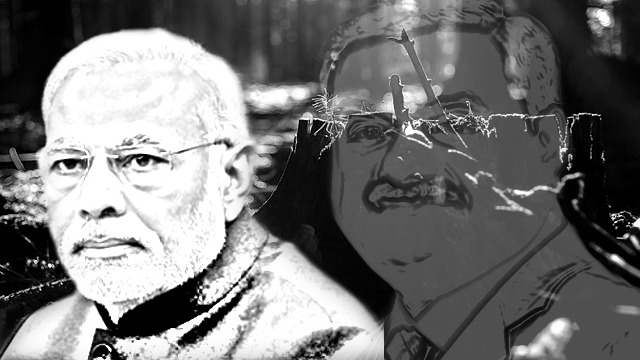 It’s unlikely that our hyper-nationalist middle class and elites care a lemon about where on earth is Hasdeo Arand, they’ve better things to concentrate upon, like World Cup Cricket. While these classes, a majority of whom are upper-caste privileged Hindus, would continue to teach their children the greatness of a Hindu Rashtra that they want India to be, as they will talk about the concept of Bharat Mata (Goddess India) to make their children patriotic according to the Hindutva fascist template created by the Rashtriya Swayamsevak Sangh (RSS), the paternal body and ideological powerhouse of the ruling Bharatiya Janata Party (BJP), they will grossly overlook Hasdeo Arand and the threat it poses to the future of their own children.

Located in Chhattisgarh and spanning about 170,000 hectares, Hasdeo Arand is one of the largest contiguous stretches of very dense forest in central India, where the Union government gave a nod to an open cast coal mining project in the Parsa block, which is one of the 30 coal blocks in the Hasdeo Arand zone. The Parsa coal block is owned by Rajasthan Rajya Vidyut Utpadan Nigam Ltd (RVUNL) and is said to have a capacity of five metric tonnes per annum. The RVUNL has given the contract to extract coal to Rajasthan Collieries Limited (RCL), which is owned by Gautam Adani, who, incidentally, is one of the biggest donors and supporters of the BJP and Indian Prime Minister Narendra Modi.

Though the erstwhile United Progressive Alliance government, led by the Congress party, decided to not allow any mining operation in the Hasdeo Arand zone in 2009 to preserve the forest and also the elephant corridor that lies in the region, where the elephants survive on the natural vegetation, the rules were changed drastically during the BJP-led National Democratic Alliance (NDA) tenure to allow the BJP’s corporate donors like Adani enjoy the Union government’s largesse and profiteer by brutally exploiting India’s last remaining dense forests. Adani’s RCL won the contract when the BJP was ruling Rajasthan; now although the BJP has exited the government and the Congress party is at the helm, still cronyism has ensured that the RCL retains its tender contract for the Parsa coal block. The new Congress regime in Chhattisgarh didn’t take any action to stop the mining giants from annexing pristine forest land, rather the state government has been threatening the tribal people who have been opposing the mining project in Parsa, as well as similar projects, with dire consequences.

The fast ecological clearance given by the forest advisory committee (FAC) of the Union government’s environment ministry before the onset of the Lok Sabha election showed how much servile the Modi regime is to the interests of the Adani Enterprises that even at the cost of jeopardising India’s future ecological security, this so-called patriotic ruling clique allowed an unbridled destruction of nature and ecology in the remnants of India’s forest cover. Despite the fact that the proposed mining zone lies in a rich forest area, no biodiversity assessment study was done by the FAC. By citing the fact that mining operations are going on in the neighbourhood, the Additional Principal Chief Conservator of Forests (Central) gave a note on the file saying “had it been on a standalone case of mining, given the density of forest, it would not deserve consideration for approval under the Forest (Conservation) Act, 1980. However, as the proposed area is one of the 3 coal blocks, out of which mining is already going on in coal block contiguous to this area, the proposal may be considered.” The ministry and the FAC overlooked the loss of forests that can’t be compensated and the pollution of the Hasdeo river due to opencast mining, which will severely impact the irrigation in the state.

The environment ministry’s file even denies the fact that it’s an elephant corridor and despite citing the fact that two people were killed in the region by elephants, the ministry shamelessly concealed the fact. This type of obliteration of facts to reinforce the government’s standpoint, which is unapologetic corporate servility, is pushing the tribal people towards the wall. They have been under assault ever since the new state of Chhattisgarh was carved out from Madhya Pradesh even without any movement for a separate state to ensure faster distribution of forest land to big mining corporations. The mineral-rich state has a high number of semi-pauperised and semi-starving tribal people, whose water, forests and land are occupied with brute force by paramilitary forces on behalf of big corporations.

Tribal activists and environmentalists claim that the coal mining project’s mandatory Gram Sabha endorsement was forged, like in any other cases in Chhattisgarh. The state is infamous for its forgery in the Gram Sabha endorsements for the mining projects of the big corporations. The Wire reported how flawed the public hearings on the Hasdeo Arand mining project was and how, dubious people voiced their opinion in favour of Adani Private Limited, which isn’t even a party to the project. People who don’t belong to the area that will be affected by the mining activities, took part in the hearings and voiced their opinion, while many who spoke in favour, didn’t give any reason for their standpoint.

The Adani-led mining companies are accused globally of flouting environmental norms and jeopardising the lives of people. From Goa in India to Carmichael in Australia, everywhere the common people have been opposing the violation of environmental laws and the severe pollution caused by the mines. A documentary by Australian ABC News showed the complicity of the Adani group in destroying the environment and impacting people’s lives with extreme pollution and diseases caused by them. Modi’s rise to power has been completely in sync with Adani’s rise to the top echelon of Indian comprador and crony capitalist system and the vice versa. It’s evident that with Modi returning with a thumping majority, and the Adani group issuing court orders to restrain the media from reporting on its misdeed, there will be more fierce aggression on India’s water, forests and land by this evil nexus.

As India faces incessant heat waves during its long and parched summer, as climate change impacted its rain pattern and thereby jeopardised its agriculture, which is mostly rain-fed, and as India’s big cities reel under the juggernaut of severe air pollution, asphyxiating the common people, especially children, it has become an important task for the democratic and progressive forces to strongly resist this attempt by the Modi regime to alter India’s ecology to suit the interests of one of the biggest donors of the BJP. It’s imperative that the tribal resistance in Chhattisgarh against the aggression of mining giants on their water, forests and land, is supplemented with solidarity movements and people’s struggle for better air, water and quality of life in other parts of the country.

A long chain of solidarity struggle to save the future of the country and help the poor and the downtrodden survive amidst a deteriorating environmental condition is mandatory today to stop the Modi regime from selling India’s natural wealth to big corporations. Hasdeo Arand is not just a forest, it’s one of the remnants of India’s ecological security and the people, except those few who can afford portable oxygen cylinders, air and water purifiers for their families, must come forward to resist and halt this pure evil design. In unity and solidarity lies the key to victory against the corporate aggression on Hasdeo Arand and many more such places.