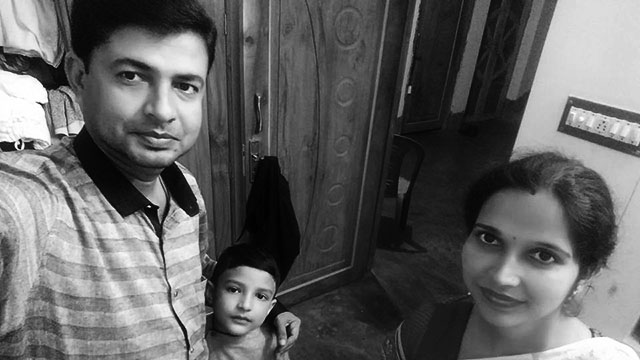 The gruesome murder of a school teacher, Bandhu Prakash Pal (40), his wife Beauty Pal (30) and their son Arya Pal (5) in Lebubagan of Jiaganj in West Bengal’s Murshidabad district, on 8 October, sparked a nationwide communal cacophony and opened ajar a door of opportunities for the Hindutva fascist Rashtriya Swayamsevak Sangh (RSS) and the Bharatiya Janata Party (BJP) — its parliamentary wing — to derive political mileage. The RSS claimed that Pal was their worker and the family is killed by jihadis.

As Murshidabad is a Muslim-majority district bordering Bangladesh, therefore, efforts are made to communalise this triple murder. Bush telegraphs are used in galore to portray the crime as a handiwork of Muslim fundamentalists irked by Pal’s RSS-affiliation. This is the central narrative over which a plethora of stories are created by the propaganda wings of the saffron camp outside West Bengal.

While in some stories the school teacher Pal is shown as a sculptor who is killed for making Durga idols, in others, he is called a victim of Islamist rage due to his opposition to the building of a mosque. It’s not merely the footsoldiers of the BJP’s notorious IT Cell, who are amplifying the virulent bush telegraph, even senior BJP leaders like Sambit Patra and senior RSS members like Professor Rakesh Sinha have tweeted the same content, mocking the opposition for questioning mob lynching of Muslims and maintaining silence on the question of Hindus getting lynched by Islamists.

Even the big players of the corporate press, especially the Hindutva-inclined television channels, have picked up the same story with the RSS bylines and have helped to augment the propaganda. Very soon this lie became a piece of viral news in the Hindi heartland and added ammo to the saffron camp’s arsenal to launch vitriolic attacks on the Trinamool Congress (TMC)-led state government. The lawlessness prevailing in West Bengal is blamed on Chief Minister Mamata Banerjee’s Muslim appeasement policies.

The feral Hindutva fascists have spelt their verdict on the murder case much before the West Bengal Police’s investigation even started. The impact of post-truth eclipsed the scope for the truth to survive. Still, it’s imperative to understand the crime and the nitty-gritty of the case to expose the fallacy of the saffron camp’s propaganda.

Pal hailed from Barala village, Sahapur, under Sagardighi police station of Murshidabad. His mother, Maya Pal (68), still lives in their village, where Pal built a house together with her. The family owns 12 cottah of land in Barala. Pal joined the Sahapur Primary School as a teacher in 2005. He moved to Jiaganj’s Lebubagan in 2018 for his son’s education prospects. He was also involved in multi-level marketing of Conybio Healthcare products, due to which he had faced some financial losses.

The family members, neighbours and the colleagues of Pal strongly deny any political angle to the murder. Maya, Pal’s relatives and his colleagues strongly deny his involvement with any political party. His cousin Bandhu Prakash Ghosh was quoted by The Indian Express saying that apart from their Parivar (family) Pal wasn’t associated with any other Parivar (read Sangh Parivar). Maya told that her son wasn’t ever associated with politics of any kind. Pal’s neighbour and a district BJP leader, Manoj Sarkar, also denied Pal’s involvement with any political party.

In-Depth scrutiny of Pal’s Facebook handle shows his support for Prime Minister Narendra Modi and the BJP, however, to draw a conclusion that he was a worker of the RSS will be too much at this juncture. After sharing a BJP supporter’s post lauding Modi’s leadership on 27 December 2016, he didn’t explicitly share anything in all these years to show his political affiliation.

Political murders aren’t a new phenomenon in West Bengal where violence has been used by all key players, including the BJP, to settle scores. Political murders have a distinct modus operandi. They don’t take place secretly, with a friendly entry into the house of the victim.

The purpose of any political murder is to eliminate crucial threats while striking terror in the hearts of the people. The long-term objective is to terrorise the masses. Such murders mostly happen in public view. No political murder will happen within four walls of a house in utmost silence, which is quintessential of murders that are triggered by personal enmity.

Pal was last seen on 8 October at 11am by the neighbours, when he was returning from the market. According to Rajesh Ghosh, an uncle of Pal, one of their relatives last spoke to Pal at 11.15am and at that time Pal informed that there are visitors and said he will call later. That was the last time one heard from him. By noon, Sarkar’s brother Pankaj Sarkar reportedly saw someone running out of the house, he tried to chase him but couldn’t. The neighbours then found Pal and his family killed.

It’s evident that there has been a lacklustre attitude on part of the police in investigating the case. A shoe was allegedly left at the crime scene by the murder(s) and all household items were found in a haywire condition. The police didn’t bring any forensic team or sniffer dog to investigate. This irked the local people. The lack of focus of the police from the beginning ruined much crucial evidence, especially forensic evidence, which could have helped to nab the perpetrators.

The brutality with which Arya was strangulated and pregnant Beauty was killed, exhibits the angle of personal enmity. The neighbours and the relatives are alleging a property dispute angle to this crime. No political murderers get such a friendly access in the house of a victim. As the day was of Bijoya Dashami, a traditional Bengali Hindu festival of meeting friends and relatives to exchange greetings, the early visitor(s) seems someone either close to Pal or is sent by someone he could trust.

As the ruling TMC called the murder an outcome of an internal feud within the BJP, after the RSS called Pal their men, it’s further jeopardising the police investigation. The Hindutva fascist propaganda on Pal’s affiliation with the RSS irked the local people. The agitated people of Jiaganj-Azimganj locality organised mass protests against this killing and against the political appropriation of the tragedy. The video of the rally was shown by the RSS’s students’ wing Akhil Bharatiya Vidyarthi Parishad (ABVP) as an RSS rally against Muslim jihadis in Jiaganj. The ABVP was criticised and condemned for such propaganda.

Facing rebuke over their attempt to hijack an incident of macabre violence, the BJP and the RSS have gradually started retreating with extreme shrewdness. Firstly, without retracting their claim that Pal was an RSS worker, they downgraded his status from an RSS worker to a “novice”. Hindustan Times quoted the BJP’s Murshidabad (South) district president Humayun Kabir claiming that the murder isn’t a political one. Following the same template, BJP’s state head and Member of Parliament Dilip Ghosh claimed that the murder isn’t a political one as Pal wasn’t any crucial figure whose killing would benefit anyone. Bidyut Pal, a senior RSS leader, was quoted by The Indian Express claiming that though Pal joined them four months back and was attending programmes, he was a “novice”. In a cunning way, the BJP and the RSS are shifting the narrative to “law and order crisis” in West Bengal to keep firing their salvo against the government.

It’s the demand of the people of Jiaganj-Azimganj that the perpetrators of the crime are booked and prosecuted. They demand justice for the victims and exemplary punishment for the culprits. Unlike the BJP and the RSS, whose leaders stood by the rapists and murderers in Jammu’s Kathua, Jharkhand’s Latehar, or Uttar Pradesh’s Unnao, the people of Jiaganj won’t rally waving the national flag demanding a release of the culprits or call them “nationalist”. No Muslim organisation will stand by the criminals either.

Here, in this impartiality, comes the biggest pain for the BJP, which is facing a hard time in West Bengal over the exclusion of Bengalis from the National Register of Citizens. The BJP needs an issue to communally polarise West Bengal and Bengalis, and the murder of Bandhu Prakash Pal and his family members in Murshidabad’s Jiaganj will remain in the book of the saffron camp’s ignominy due to their shameless attempt to appropriate a case of a brutal murder for scoring political brownies. The despicable politics of BJP, which trades in blood, must be condemned not just by the people of Jiaganj but all Indians who still retain human characteristics.