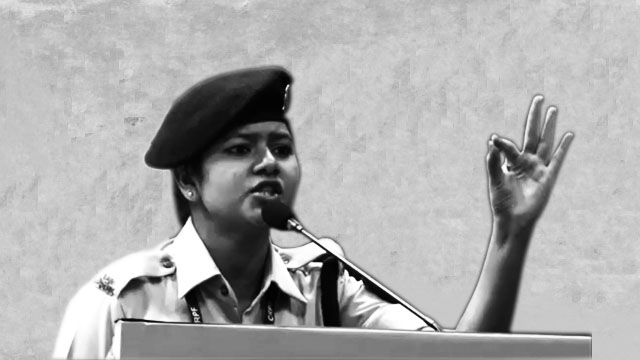 Chauhan believes that there is no need for respecting human rights of those who oppose the government and people accused of sedition — a colonial concept — must be killed without a trial! Chauhan’s prejudice, her contempt for democracy and democratic rights, and her advocacy for a fascist reign reflect her outlook that’s strongly affected by her privileged class and caste position in the society. It also shows the mentality of those who are guarding the current system and the rickety chimaera of hope called Indian democracy.

After an upheaval over the content of Chauhan’s speech, her employer, the CRPF came out to her rescue, saying that the speech was part of a debate in which she was speaking against the motion on the issue of human rights. The CRPF said it was surprising how this clip went out as it didn’t leak it and neither did the NHRC. Though the CRPF criticised the release of the video, however, it still called her speech brilliant. The sub-layered appreciation spoke a lot.

It’s no wonder that for the last seven decades the CRPF has been a brutal killing machine of the Indian ruling classes; it’s no wonder that from Chhattisgarh to Jammu & Kashmir, wherever it’s present and operating against the local people on behalf of the Indian ruling classes, it’s accused of gross human rights violations. Expecting the CRPF’s constables to value human rights, when they’re hired to blatantly flout them, will be too much at this juncture.

Fascism glorifies the military establishment and combines the state, the ruler and the military as a single entity, whose elements are indistinguishable. Under Modi’s Bharatiya Janata Party’s (BJP) sclerotic rule, the very lines that hitherto divided the government, the military, the ruling party, the Rashtriya Swayamsevak Sangh (RSS) — the parent body of the BJP — and the crucial pillars of the state, are blurred. These entities are now one and inalienable.

Under Modi’s rule, worshipping the military is considered as a hallmark of patriotism. Questioning the military, which is funded with the hard-earned money of the tax-payers, direct and indirect, is considered blasphemous. By equating himself, the BJP and the RSS with the nation, Modi has portrayed Indian forces as “his” own. The total Hindutvafication of the armed forces is complete.

No wonder under Modi’s rule and the RSS’s omnipresence, Chauhan unapologetically holds such venomous views. People like her are superfluous in all branches of security forces, which have been maintaining the Indian state’s hegemony on the exploited classes and oppressed people. No wonder that the Indian security forces are unapologetically Islamophobic and Brahminical in character and they try to undermine the people’s constitutional rights to make way for casteist and communal prejudices.

Still, there are reasons to be optimistic. Still, there are people like Ashutosh Kumar, the Central Industrial Security Force (CISF) sub-inspector, who spoke blazingly on behalf of the motion. “If the common man is not safe, what is the point of national security?” Kumar asked. Kumar tore into the hyper-nationalist argument that used the garb of national security and questioned the concept of security when no rights will be left.

CISF Assistant Commander Mayank Bhati also vouched for human rights. “What my worthy opponents fail to realise is that the non-observance of human rights by the state and the security forces is one of the chief causes of militancy. Man did not enter society to have fewer rights than he had before, but to have those rights better secured,” Bhati said.

“Our actions in the name of national security are neither human nor right when our own citizens have to choose between the force’s pellet or a terrorist’s bullet,” he added.

It’s true there are very few people like Kumar or Bhati left in the armed forces, yet, their presence makes a difference. Despite facing hardships, strong opposition and vitriol, these men are trying to make a difference, which the progressive and democratic forces must support. Though they won’t make a big difference, yet their thoughts deserve applause in such difficult times.