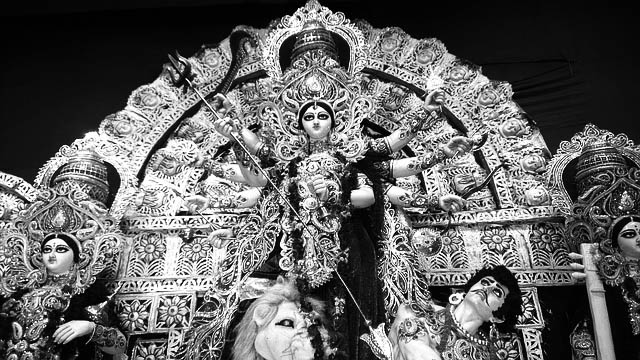 West Bengal’s Durga Puja is a much-celebrated festival in the social and cultural milieu of contemporary Bengali Hindu society. Though it’s celebrated with a lot of resplendence wherever the Bengali Hindu community lives, it’s always West Bengal’s capital Kolkata, which fascinates the world due to its baroque architectural marvels in the form of pandals and theme-centric pujas, which is unmatched in both creative essence or budget in the world.

Now, after the Bharatiya Janata Party (BJP) rose to fame in the state’s electoral fray, ebullient after winning 18 out of 42 seats in the 2019  Lok Sabha election, the celebration of the Bengali Hindus has come under the radar of the Hindutva fascist camp and it wants to remodel this occasion according to its own puritan criteria.

Durga Puja organisers of Beleghata 33 Pally, which is managed by the ruling Trinamool Congress’s (TMC) Paresh Paul, tried to canvass the multi-ethnic culture of West Bengal by playing hymns of other religions, like azan of Muslims, hymns of Christians, Buddhist chants, from the pandal. The theme of the puja pandal is “One, not alone”.

This theme and celebration of diversity irked the BJP and the Rashtriya Swayamsevak Sangh (RSS) goons, whose representative filed an FIR against the organisers for “hurting religious sentiments”.

This is not the end, the Bajrang Dal sent its thugs to threaten the organisers and the visitors with intimidating Hindi communal sloganeering. They threatened the organisers of dire consequences, yet the TMC’s backing helped Paul’s men to carry on the show.

Other Durga Pujas, like Naba Uday Sangha of Kasba’s Rajdanga, in south Kolkata, highlighted the plight of being a refugee using the theme “Refugee: The name of a phoenix”. Citing the ongoing agony of the Bengalis due to the draconian National Register of Citizens (NRC), the theme touches a contemporary issue quite strongly.

Such themes enraged the RSS-led Hindutva fraternity, which is trying hard to convert the Bengali celebration of Durga Puja into a version of the north Indian Navaratri. They want to make Durga Puja more religious in character and less cultural. This cultural sacrilege is happening quite frequently in West Bengal as the RSS and the BJP are incessantly attacking the concept of eating, celebrating and the overall de-linking of religious essence from the occasion.

The BJP had profited from Durga Puja in the past by spreading xenophobia over West Bengal among the non-Bengalis, and a section of Bengali Hindus living outside the state, who were taught that Chief Minister Mamata Banerjee had clamped down on Durga Puja to appease Muslims using vitriolic fake news. The incident of Dashami (the last day of Durga Puja) falling on the 10th day of Muharram in the past, which forced the TMC government to change the route of idol immersion to avoid communal incidents, was magnified and amplified by the RSS’s progeny organisations as an example of “minority appeasement” to toxify the environment.

This year, it has amplified its coarse cacophony using the azan issue, with a vigorous attempt to polarise the Bengali Hindus and also to force a puritan code of conduct for Durga Puja organisers in West Bengal and elsewhere. The Durga Puja organisers associated with the RSS and the BJP in West Bengal, who have done a somersault regarding their political loyalty after being enthralled by the BJP’s sudden rise in the state, have already used the puritan code of conduct to turn their Durga Pujas into more of a religious event than a social and cultural festival.

In the non-Bengali dominated central Kolkata, Young Boys Club Sarbojanin Durga Puja Committee and Burrabazar Friends United Club, both managed by BJP and RSS stalwarts and manned by non-Bengali upper-caste Hindus, have been celebrating the purported Balakot Air Strike and Modi’s success in their themes. Their crass political theme didn’t inspire or captivate people any more for their direct communication and lack of innovation. This, too, irked the RSS-led Sangh Parivar as most of the innovative themes came from the anti-BJP Durga Pujas.

While the Bajrang Dal and the RSS have set up a vigil to prevent non-Muslims enter Navratri or Gujarati Garva celebration, using the leitmotif of “love jihad”, majority of Bengali Hindus in and outside West Bengal, threatened by the NRC and the RSS-BJP’s muscle-flexing, have given a call for Durga Puja for all. On social media, #DurgaPuja4all made a great impression, knitting the Bengali community, including Muslims, Christians and others, together in a celebratory mood, when NRC hangs like the Sword of Damocles over them.

It’s indeed clear, despite their raucous and screeching, the RSS and the BJP will find it quite hard to change the characteristics of Durga Puja and convert it to Navaratri by imposing puritan norms. Their only weapon right now is to strengthen the cultural colonisation drive of Bengalis using the Hindi-Hindu-Hindusthan juggernaut. However, as the NRC will terrorise the people, drive them towards utmost despair, the party and the RSS will see new power blocs rising against it and its own space, carved with the muscle power and money power of Marwari-Gujarati and north Indian Brahminical forces, shrinking in Bengal with a resurgence of Bengali nationalism, which even the British imperialism couldn’t dominate using sedition charges. Amit Shah and his gang will have to toil a lot to throw out Durga from the households of Bengali Hindus, who, unlike the Bahujan narrative, consider the deity their daughter.