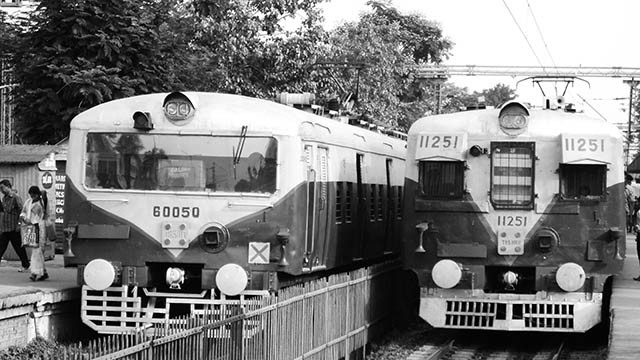 As West Bengal’s largest festival Durga Puja is approaching, the Bengali Hindu elites and urban middle-class of the state, who have remained unaffected by the economic disaster aggravated by the COVID-19 pandemic-related lockdown, have entered a shopping spree. Shopping malls, markets and streets are clogged with a crowd of millions. In this scenario, while crowded buses are plying with passengers hanging outside, autorickshaws, the ubiquitous three-wheeler last-mile connector, are plying with passengers literally sitting on each other’s laps, there is no suburban local train service, which connects Kolkata with its neighbouring districts and is the preferred, most economic mode of commuting for millions.

The suburban local train service in the state came to a halt in March 2020, when Prime Minister Narendra Modi’s government announced a lockdown to control the COVID-19 situation. Though the COVID-19 situation didn’t get better, as from 536 cases on the day the nationwide lockdown was announced, it has now reached 867,496 active cases and more than seven million cumulative cases, making India trail behind the US in the global list of pandemic-hit countries, the disastrous and most inhuman lockdown was lifted and almost all forms of public transports are allowed to ply, sans the suburban local train service.

Eastern Railways and South Eastern Railways run the suburban local train service connecting Kolkata with the suburbs and the nearby districts. While the South Eastern Railway General Manager Sanjay Kumar Mohanty was quoted by the PTI on September 11th 2020, saying that the railways will be working out “a strategy for resuming suburban train services in a graded manner” after jointly planning with the state government, Eastern Railway General Manager Suneet Sharma rejected the proposal, saying that the network has no infrastructure or manpower to implement social distancing norms at the suburban station platforms or provide e-tickets to passengers.

On October 9th 2020, the Sonarpur station in Sealdah South division experienced a violent rampage as the Government Railway Police (GRP) and Railway Protection Force (RPF) personnel tried to forcefully deboard unauthorised passengers from the special trains run by the railway to ferry its staff. Every day, many poor and low-income group daily passengers, who can’t afford to travel in buses, would sneak in those trains and travel to Kolkata. The GRP and RPF forces were sent to forcefully deboard them and a scuffle began, which took a violent turn. The reason the rumbustious passengers went on berserk is the utmost frustration caused due to the absence of the crucial suburban local train service, which is a lifeline for them.

For millions of people, who have already lost their employment due to the lockdown or faced immense losses in their business, travelling in buses––when the road transport fare is highest in West Bengal where salaries and wages are the lowest in the country––isn’t an affordable option. Many have lost their jobs due to the unavailability of the only cheap transport option they have been using for years to commute. Now, even after the unlock phases, they aren’t getting an opportunity to look for an employment opportunity or resume their old work. This is aggravating their financial crisis and social discontent as well.