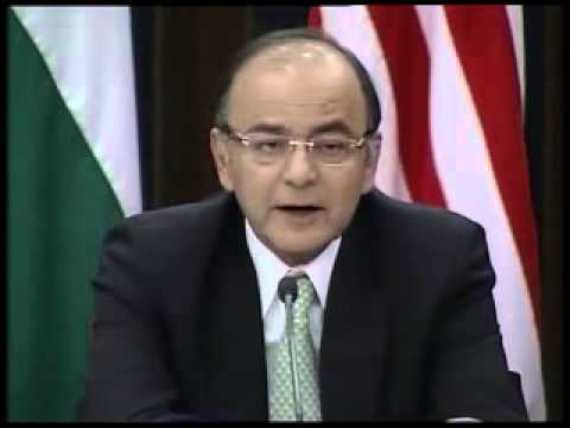 The attempt of the BJP government led by Narendra Modi to “hard sell India” to foreign investors using the cheap labour, minerals, and natural resources as baits, was intensified by the Finance Minister Arun Jaitley during his visit to the United States. The BJP leader began bashing the Indian legal system for being “too slow” and criticised legal hurdles erected against the foreign monopoly capital investors by aggrieved parties in India, who are forced to the court due to the apathy of the government. Mr Jaitley commented on the judicial entanglements of India which lowers investor confidence at New York during his ten days visit to the headquarters of world monopoly and finance capital.

Mr Jaitley also made attempts to woo US monopoly capital hawks to invest more in India by promising them that the government led by the BJP will surely pace up the liberalisation process to make the interests of the foreign monopoly capital investment more secure. He told this after a visit to the NYSE.

Also, Mr Jaitley is about to meet the US treasury chief for discussion regarding the India – US trade which is of secondary importance to the government of India, with its primary focus fixed on increasing the span of US investment in the country and increase the involvement of the US monopoly capital in the Indian economy.

The US monopoly capital has invested through various channels in the Indian IT, insurance, real estate, pharma and manufacturing sector either through the route of Foreign Direct Investment (FDI), which asks for a long-term commitment, and also through the Foreign Institutional Investment (FII) channel, which is the most liberal, volatile and sought after route by the US monopoly capital investors.

The Modi government has focused on carrying forward the economic liberalisation policies formulated by the previous BJP (Vajpayee) and Congress governments by ratifying the existing laws on labour, land acquisition, and capital investment in Indian industries to ensure that the foreign monopoly capital gets a wider playground in the nation and can sponge out more super profit by utilising the cheap labour and virtually free natural resources of the nation, including the mineral resources.

The endeavour of the Indian ruling establishment, influenced by the US monopoly capital, is to turn India into a neo-colony of the US monopoly capital and make it a cheap manufacturing destination for the foreign corporations by providing land and resources at a throwaway price. The false notion of the foreign investment increasing the employment opportunities for the local people was shattered long back with the adoption of a liberal hire and fire regime in terms of labour and outsourcing workforce management to the notorious labour contractors who pay the workers, managing most of the line of production for the foreign monopoly capital, wages that are too short than the government approved minimum wages for similar jobs.

Apart from the above, the US monopoly capital has increased its stake in the Indian companies, using millions of threads of the stock market route, to ensure they have a larger say in the affairs of the companies and their business policies. Most of the Indian companies are owned by US monopoly capital or their subsidiary organisations along with banks whose stakes are owned mostly by the monopoly corporations of the US.

The BJP regime most unapologetically pursues the course of corporate appeasement and ensures that the multinational corporations achieve high growth ratio in the Indian industries, especially in the most booming sectors like insurance, banking, financial services, real estate and IT services.

The decrease in the intensity of organised and unorganised labour movement against the aggression of foreign capital since the days of the GATT pact signed by the Congress regime has provided a defenceless goal post to the foreign monopoly capital, and most of the Indian political parties of all hues have provided overt and covert support to the expansion of the foreign monopoly capital’s aggression on the Indian soil.

The people of the nation has lost their economic freedom to the large corporate capital, that calls the shot at all walks of life and even shapes the opinion of the people including their political preferences through numerous mainstream media, print and electronic, that these corporations fund through their various Indian conglomerates to create positive perceptions regarding the pro-neo-liberal economic policies and the political forces of the extreme right that promote such policies through the legislative routes.

The visit of Jaitley has more angles to it than what is so far disclosed by the mainstream monopoly capital funded media houses, this trip is a confidence building measure for the US investors who are unhappy with the political protests in the nation by the anti-BJP forces against the anti-people and pro-US policies formulated by the Modi government, and wants a smooth passage of all of such bills that paves the way for the US monopoly capital to accumulate the hegemonic position in the Indian economy overtly. Arun Jaitley, being the topmost representative of the Modi government, is trying hard to please these monopoly capital sharks with assurances that the government will implement the policies despite all hardships and opposition.

The national interest of the country will be jeopardised further if the BJP government can pursue its course unopposed by the people. As the proposed defence production plan that involves up to 100% of FDI, the railway reforms project proposed by the government, which will eventually open up the world’s largest railway network to the foreign capital, and other such reform measures that will stab the leftover indigenous industries and trades of the country, will seriously place the national economy, security, as well as the livelihood of millions of peasants and workers into a dangerous situation.