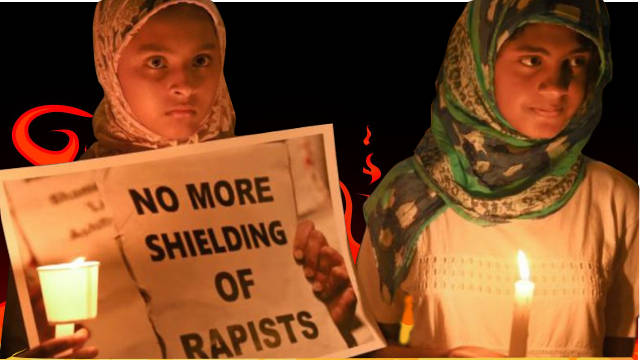 The brutal rape and attempt-to-murder of a minor girl in Mandsaur of Madhya Pradesh, infamous for last year’s brutal killing of farmers by the BJP government, has again raked up a communal binary over a heinous crime like rape. The two men accused of raping the minor in Mandsaur are Muslims; an identity that’s now hyped by the RSS goons, the BJP supporters and social-media celebrities to score points against those who protested vehemently against the Hindutva camp’s unconditional support and advocacy on behalf of the arrested accused of the brutal gangrape and murder of a minor Muslim Bakharwal girl of Kathua earlier this year. The whataboutery and the constant barrage of vitriol against the secular, democratic and anti-fascist political forces and activists by the Hindutva camp using the garb of religion, shows, once more, how dangerous the internal situation of India has turned following the 4-year-long rule of Narendra Modi and his coterie of Brahminical feudal fascists.

A recent report compiled by Thomson Reuters shows that India has become the worst place on earth for women under Narendra Modi’s rule. From the fourth position in the list of most insecure countries for women in 2014, India occupied the first place in this year’s report. Narendra Modi, who once ridiculed the Manmohan Singh-led UPA II government over the deteriorating condition of women safety in India and once cited the older report himself to criticise the Congress government, remained absolutely mum on the recent findings. Though the Modi government vehemently rejected the findings of the report on women security, just like it trashed the UN Human Rights report on the violation of human rights in Kashmir, the government is in no position to escape the bludgeoning blows from all quarters. The only rescue option left for the RSS is the one that it has always used in its history of existence – spearheading communal polarisation to divide the society.

In a state like Madhya Pradesh, where a most unpopular, anti-farmer and utmost corrupt government headed by the BJP is going to face the voters in few months, the RSS cannot polarise the masses merely on the basis of beef politics for long when the oil prices are soaring, inflation is north-bound and corruption, from the Vyapam scam to different recruitment scams are rampant in the state. The biggest threat to the BJP’s unchallenged 15-year-long rule comes from the disgruntled farmers, who have been fighting sternly against the saffron camp’s anti-farmer and pro-corporate policies. In the midst of such a political crisis, when bringing a hired crowd to Narendra Modi’s show is costing a fortune to the BJP, the rape of a minor by two Muslim men, that too in a volatile place like Mandsaur, has become a strong weapon for the Shivraj Singh Chauhan regime to score brownies.

From BJP’s dreaded IT Cell Chief Amit Malviya, who commands the allegiance of thousands of social-media trolls under his payroll, to the yesteryear flop film actress like Koena Mitra, each and every stooge of the Narendra Modi regime are uttering the same gibberish propaganda against the Muslim community and the secular camp by using the religious identity of the accused-duo, Asif and Irfan. The Chief Minister of Madhya Pradesh, Shivraj Singh Chauhan has already spelled death sentence for the accused following the police and media trial, while the social media is filled with a campaign that’s directed against Muslims and their space in India, rather than targeting a menace like rape and the problem of weeding it away from the society.

In the last 10 days, we heard of 5 women in Jharkhand gang raped with sticks and guns inserted in their private parts by Maoist-Church faithfuls, 5 padres exploiting a hapless woman, two young girls, same age as Kathua victim, raped and mutilated by Muslim rapists. ZERO outrage.

Champions of “candle march” have shoved their candles back in their asses realizing this rape victim is a Hindu child & the rapists are Jihadis Shame on their selective outrage.
#MandsaurMeinAdharm
“Muhammad Irfan” 1 of the rapists 👇 pls mention his name in your tweets. pic.twitter.com/SKBqOTp5sB

While running their hatred campaign and spreading rumours to polarise the majority of Hindus against the Muslims, the RSS men are trying to ensure that the people don’t see both sides of the coin. The anger and frustration, which the RSS men are disseminating over their temporary setback in Kathua case due to a nationwide outrage, is actually a ploy to cover some of the very basic and fundamental differences between the RSS-campaign of hatred and bigotry over a tragic and heinous crime like rape, that too of a child, and what the Muslims or the secular, democratic and anti-fascist political camp is doing.

Firstly, unlike the accused Hindutva fanatics of Kathua, who allegedly abducted and raped Asifa Bano (8) in a temple in their village to create a panic among the nomadic Bakharwal Muslim tribals so that they can be driven away from the village, the accused rapists of Mandsaur raped the little girl with a heinous agenda of fulfilling their lust. They tried to kill her so that they aren’t caught for the crime. However, in the case of Kathua, the girl was killed to spread terror among the Bakharwal community by the upper-caste migrant Hindus who subscribe to the RSS ideology. In the Mandsaur gangrape case, there was no political agenda seeking an avenue to spread terror or political domination behind the act as per the charge sheet of the BJP-ruled state government’s police. This is a major point of difference between the Kathua gangrape and murder incident and the Mandsaur gangrape incident.

Secondly, even after knowing that these two Muslim men could be framed by the BJP-ruled state to score political points and create Hindu-Muslim rift, the Muslim community, the Muslim political parties or the secular and anti-fascist forces didn’t take out any rally waving the national flag in defence of the rape accused and turn the rape into a Hindu-Muslim binary like the Sangh Parivar. No Muslim community leader called the men innocent, despite them being not convicted right now. Rather, the entire Muslim community came to a unanimous decision that the duo, if found guilty, must be hanged to death for their crime by the court; no Muslim cleric will lead any congregation for their funeral and no Muslim graveyard will offer their land to bury these men. It was not so in the case of the Kathua gangrape and murder case, where the BJP created a ruckus in support of the rape accused, took out rallies in their defence waving the national flag and burned the town by instigating riots.

Thirdly, no committee of Muslim lawyers, intellectuals and influencers are formed to fight the police and the government on the question of these two Muslim men, no community member has opposed the investigation of the crime and no one cried victimhood of Muslims, even when there is a good chance of it under the Shivraj Singh Chauhan-led government. No secular democratic politician or organisation supported the accused, no public representative rallied in support of the duo. Entire human race, except the Sanghi deviation, rallied in support of the rape victim and wished her quick recovery.

Now that all their attempts to portray the Muslims and the secular democrats in a villainous role failed once more in the case of Mandsaur gangrape, the BJP and its Hindutva fascist stormtroopers started spreading rumours over the rape case to establish parallels between the Mandsaur rape case and the Kathua rape case. This unholy attempt by the party that has given cabinet minister rank to Sadhus (Hindu sages), including perks and security from public exchequer, shows how the BJP is actually lagging behind in picking up a genuine agenda to face the voters of Madhya Pradesh, especially the farmers, workers, toiled people, unemployed youth and discontented students during the assembly election.

Be it Mandsaur or Kathua, rape is a heinous crime and the Indian ruling classes – the feudal landlords, the big comprador capitalists and their foreign masters, i.e. the big foreign corporations and banks, have long used rape as a political and social tool to dominate women and to subjugate the feminist aspiration of liberation from patriarchy. Rape is legitimised by almost all institutions in India and the victim is always shamed by the Brahmanical socio-economic system than the accused. To ensure justice for the victim of Mandsaur gangrape incident, like the victim of Kathua gangrape and murder, there is a need of a speedy and correct prosecution system, a holistic and feminist education system and a strong socio-economic and political order that can ensure women equality, liberty and security, which will help them fight and defeat gender violence and oppression without looking up to the state for help.

The majority of Muslims of Mandsaur or the Muslims of anywhere in India doesn’t support rape or rapists, just like the majority of Hindus of India, especially those in Kathua, Jammu, who also does not support rape or rapists. A rape is always a manifestation of patriarchal domination and no political force should glorify rape, like the BJP or the RSS does. It’s indeed Vinayak Savarkar’s rape doctrine that turns the Hindutva fanatics into ardent rape apologists and many RSS-VHP men into rapists, including those necromaniac Hindutva fanatics, who want to pull out the corpse of Muslim women from graves to rape them. This rape fantasy of the BJP and the RSS help them to bring Hindu-Muslim binary into any rape case and do whataboutery on them. The majority of Hindus, the workers, the farmers, the toiled people, the students and youth, vehemently oppose the rape doctrine of the RSS and these forces can and they will certainly defeat the cavalcade of the Hindutva fascists.