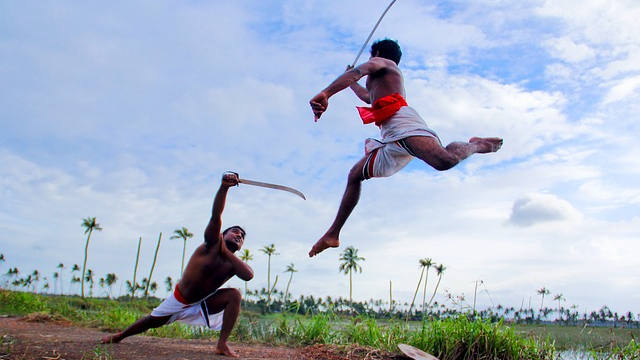 On 2 January 2019, two women in their 40s, Bindu Ammini and Kanakadurga, entered the controversial Sabarimala shrine in Kerala by reaching the temple from Pamba with a police escort. This was the first instance where women below 50 years of age entered the shrine after the Supreme Court lifted a legal ban on their entry in September 2018.

Earlier, in 1991, the Kerala High Court imposed a ban on the entry of women below 50 years of age to the shrine of the deity named Ayyappa, who is highly revered in Kerala by Malayali Hindus. A third woman too, reportedly, entered the shrine later. This first entry of women into Sabarimala shrine happened soon after the ruling CPI(M) organised a women’s human chain or a Women’s Wall, called ‘Vanitha Mathil’ in Malayalam, elongated 620 km from northern to southern Kerala, in support of the Supreme Court’s verdict and demanding an end to gender discrimination in religion.

All the hell broke loose in God’s Own C after this incident; the Hindu fanatics, enraged since the Supreme Court’s order, started a large-scale violent rampage all over the state. The BJP and the RSS, utilised the scenario and played with the parochialist outlook of the Malayali Hindu upper-caste fanatics and pressed into service the notorious Hindutva fascist terrorists, who started a large-scale violent attack on public properties, trade establishments and targeted the Muslim community to spark a communal carnage in the very state which was so far known to be the most liberal, educated, progressive and advanced state in India.

The Sabarimala row ensued when a five-judge-bench of the Supreme Court, headed by former CJI Dipak Misra, delivered a 4:1 verdict on the issue in September 2018. The custodian of the Sabarimala temple, the Devaswom Trust, controlled by the former royal family of Travancore, opposed the Supreme Court’s decision. The BJP, smelling an opportunity to carve a niche for itself in the state where it had been a non-factor for years, initiated a number of large-scale violent agitations, especially at the base camp of the shrine, to prevent the Supreme Court’s order from being implemented.

This vehement opposition by the BJP is an unprecedented muscle-flexing by a mainstream parliamentary party against an order of the Supreme Court, which evinced that the BJP and the RSS have no respect for the Constitution’s rule in the country and it’s hyperactive to impose religious theological dictatorship in place of a Constitutional rule in the country.

Prime Minister Narendra Modi earlier endorsed the misogynist view of the BJP that women below the age of 50 should not be allowed inside the Sabarimala temple to uphold its ‘tradition’, carefully ignoring the fact that women below 50 used to go to the shrine even until the late 1980s.

Narendra Modi tried to separate the issue of women’s entry in the Sabarimala temple from the issue of Triple Talaq ban, which he called a great move towards empowerment of Muslim women, by playing the same ‘tradition’ card. This endorsement was the gush of wind to the sail of the Sangh Parivar’s pugnacious mobsters. Following the support expressed by the prime minister, the state BJP instigated large-scale mob violence throughout Kerala since 4 January.

Utilising its resources, money and muscle power, the BJP made inroads into the traditional vote bank of the Congress in Kerala, which consists of the upper-caste Hindu feudal landlords and Brahminical supremacists. The overtly communal tonality of the BJP’s propaganda, its no-holds-barred opposition to women’s entry into the temple, won the BJP popular support among the upper-caste Hindu fanatics, Brahminical supremacists and utmost misogynist sections of the Malayali Hindu society.

A frightened Congress tried to beat the BJP and preserve its vote bank by projecting itself as another version of the BJP without the saffron banner. The Congress supported the misogynist outrage of the reactionary Brahminical forces in Kerala and used the same virulence to attack the government and the Supreme Court as the BJP had. An ugly race between the two major national right-wing parties began over who is more ardent Hindutva follower and supporter of misogyny.

The RSS, which has been fighting violent battles with the ruling CPI(M) to overthrow the party’s rule in the state with the help of Article 356 of the Constitution citing deteriorating law and order situation, used the Sabarimala row to bring a large contingent of Hindutva terrorists from neighbouring Karnataka, Maharashtra and north Indian states, who started violent attacks against the CPI(M) cadres, offices and even on the police. The violence also reached Kannur, where the RSS had earlier killed hundreds of CPI(M) workers to expand its base. Bombs were hurled at CPI(M) cadres, their houses were ransacked and the police had to retreat finding the feral mob of Hindutva terrorists, armed up to their teeth, quite invincible to stop.

During the hartal called by the BJP and later, the RSS men were found to be roaming freely with dangerous arms and ammunition, launching terrorist strikes against police stations, public transport vehicles and the CPI(M) supporters. Many CPI(M) supporters were killed, wounded and their houses vandalised by the RSS men in Kannur and other regions.

While the CPI(M) cadres at the grassroots faced the wrath of the RSS’ men, their leadership, especially those in the government, didn’t take any affirmative step to curb the violence, unlike their large-scale military attacks on Maoist propagandists in the tribal belt of the state. Even though the BJP torched numerous CPI(M) offices, bombed the police stations, killed CPI(M) workers, attacked the Salafist SDPI members, hurled bombs at shopkeepers who defied their diktat, the CPI(M)-led LDF government gave a tepid response and didn’t show any alacrity to crackdown the menace.

CPI(M) state secretary Kodiyeri Balakrishnan called the violence, massacre of CPI(M) workers as a trap laid by the RSS and asked its workers to avoid falling in it, which is equivalent to proposing a total pacifist attitude while facing relentless violence from the utmost fascist, communal and reactionary force of the Indian polity.

The pacifism of the CPI(M), the reluctance of its leadership to help or support the cadre at the grassroots and the nonchalant attitude of the police, which only periodically arrested RSS men and charged them with lighter, bailable offences so that they can walk out freely with absolute ease, not only showed how the parliamentary and opportunist left is playing at the hands of the BJP, with which it shares much of the political-economic ideologies, it also hastened the organisational erosion in the rank of the CPI(M), as many of their cadres had to succumb to the threats of violence and surrender themselves to the saffron camp. The CPI(M) is itself preparing its nemesis in the last state it’s ruling after facing a total rout in states like West Bengal and Tripura.

The BJP leaders like Amit Shah and Prime Minister Narendra Modi are scheduled to visit Kerala soon and they will motivate the workers to intensify their sheer misogynist campaigning over Sabarimala and use the occasion to flare up communal violence. The party is watching the Sabarimala row as a weapon to wrest control of a large number of parliamentary seats from the state.

If the state government and the CPI(M) are allowing free passage to the BJP and not resisting its evil intentions with brute force, but using rhetoric, ambiguous statements and exhibiting a disarrayed condition, then it’s an unequivocal indication that the CPI(M) is least bothered in resisting the BJP, its nemesis in Kerala, rather it’s more interested in compromising with the Hindutva camp to not annoy its Hindu vote bank, while paying lip service to the Constitution, Supreme Court’s verdict and the right of the women.

The Sabarimala row is not a matter of a fight between tradition and rule of law, rather it’s a battle between the utmost feudal, regressive and patriarchal vision and the rights of the women in society. The women are oppressed and vilified in all established and mainstream religion, and their fight to claim equality with men can’t be just agreed upon over a piece of paper but in reality, at the grassroots.

Women must have unrestricted access to all public places, including the places of worship and they shouldn’t be barred from entering a place of worship or praying along with men by citing traditions and customs in a country that’s officially ruled according to rules and laws laid down by a Constitution.

It must not be forgotten that the women hold half the sky and those who are loyal to the cause of equality, democracy, progress and gender rights, can’t shy away from supporting the women demanding their rights to enter, pray and be equal in a religion that bars them from becoming equal. The customs of the Sabarimala temple may be connected with the belief of a section of the people, however, they are not above the Constitutional and democratic morality, which teaches people to consider everyone equal.

Even if the Supreme Court may not have ordered in favour of entry of women below 50 to the shrine of Ayyappa, it’d be the prerogative of those who call themselves secular, progressive and feminists to fight and win the right for the women to enter the Sabarimala shrine. It’s important to not give up a just fight by citing ‘undue advantage’ taken by the RSS and the BJP, which are declared misogynists. The women’s rights can’t be won or established by compromising with these Hindutva fascist forces, but by fighting and defeating them with extreme vigour and determination.

The women of Kerala are always known for their valour, perseverance and their glorious struggles against patriarchy. Even though the ruling CPI(M) has subscribed to opportunism and tries to balance patriarchy and Hindutva to keep its vote bank intact, it’s imperative for the democratic, progressive, anti-fascist and secular forces to wage an uncompromising struggle against the parochial, patriarchal and utmost reactionary Hindutva fascists and their bid to stop the women from claiming their rights on the public spaces.

It’s imperative that the forces of reaction are defeated in the battleground of Kerala by the forces of democracy, progress and equality. This can be done only by organising and awakening the broad masses of poor working people: the farmers, the workers, etc. against the forces of reaction; it can be done by awakening the poor, toiling and working women against the institution of patriarchy and the very feudal-comprador capitalist-foreign corporation nexus that buttresses such an institution. Let the Sabarimala row become a watershed moment in the state’s political history and let it be the Waterloo for the Sangh Parivar’s ambition in the southern state.