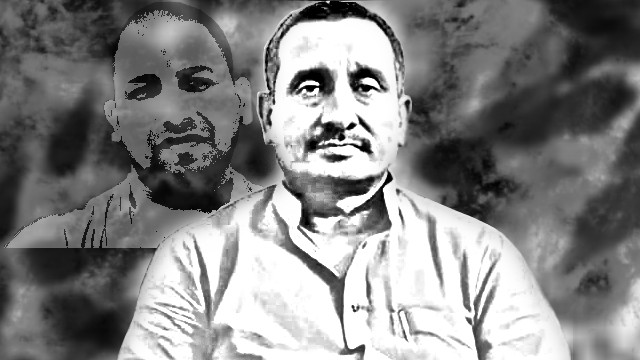 A woman from Unnao, Uttar Pradesh, who accused the ruling Bharatiya Janata Party’s (BJP)  Member of Legislative Assembly (MLA) Kuldeep Singh Sengar of raping her, met with a tragic accident on Sunday, 28 July 2019. A truck rammed into her car in Gurubakshganj, killing two of her aunts, while critically injuring her and her lawyer. They were returning from Rae Bareli after meeting the woman’s uncle, who is lodged in the Rae Bareli Jail after being falsely implicated by Chief Minister Yogi Adityanath-led BJP government on behest of MLA Sengar. The incident sparked outrage all over the country and brought people on the streets in India Gate, New Delhi, protesting the “Jungle Raaj” (lawlessness) reigning in Adityanath’s Uttar Pradesh. The victim has been alleging a deep nexus between the accused, the police and the Adityanath’s administration, which has been pushing her and her family towards abysmal crisis and has allowed the MLA’s henchmen a free reign to threaten her family and relatives.

The 19-year-old woman’s plight came to the limelight in 2018, when she tried to commit suicide outside the residence of Adityanath. She tried to immolate herself but was saved by the police on duty. She then accused the BJP MLA Sengar of raping her in 2017, when she was taken to him for a job. She accused that the local police didn’t help her lodge a case or investigate the matter. She also alleged that she is a victim of another gangrape that took place in 2017. Later, the police arrested her father and took him to the police station, where he died under mysterious circumstances. The woman’s family accused the police of custodial torture on behest of the MLA’s brother, which killed her father. Her uncle was implicated in a false case of arms act and was arrested regarding a case filed in the early 2000s by the police. Ironically, her uncle had been with the BJP for a long time and even worked to ensure the win of Sengar in the last election.

Despite this ordeal, her fight for justice against the BJP MLA continued and she neither got any support from the highly Hindutva-incensed Adityanath government nor from the political, women or civil rights organisations. Her family and relatives are regularly tormented and threatened so that the victim changes her statement in the court and come in a settlement with the criminal-turned-MLA Sengar. It’s alleged that while Sengar was arrested last year for the crime and lodged in jail, his notorious brother Manoj Singh Sengar and his associate Rinku were running the crime show on his behalf. They have been regularly threatening the victim and her family members and their hand behind the tragic accident on Sunday, can’t be ruled out.

Though the woman was provided with nine-member-strong police security, of which three policemen were supposed to accompany her whenever she would travel, none of them travelled with her on the fateful day. The police are claiming that the guards didn’t accompany her as there was no room in the car they were travelling in, without clarifying why couldn’t they travel in their own vehicles to protect her. Her uncle, lodged in Rae Bareli Jail, accused the policemen of collaborating with Sengar and providing his men information about the woman’s journey to Rae Bareli. The truck that hit the car had a number plate blackened and this triggered more speculations regarding the complicity of the accused MLA in this so-called accident. The Adityanath regime, now on the back foot due to a massive people’s upheaval, has decided to handover the case of the accident to the Central Bureau of Investigation (CBI). The CBI is also investigating the case of the woman’s father’s custodial death and has filed chargesheet against the MLA’s brother Jai Deep Singh.

Whether this accident was a pre-planned conspiracy or a simple case of road accident can be known only after an impartial investigation and the culprits can be convicted only after a due process of judicial prosecution. However, the events that unfolded in the last one year, from the allegation of gangrape of the woman to her rape by the accused BJP MLA, from the death of her father in police custody to this car accident, everything appears so much predictable like a B-grade Bollywood masala film script of the 1990s that there remains little room of ambiguity regarding the MLA’s role.

Adityanath’s claim of cleaning Uttar Pradesh of organised crime, for which he and the BJP accuse the former governments led by the Samajwadi Party and the Bahujan Samaj Party, falls flat on the face when the BJP MLAs like Sengar appear on the dock. Soon after usurping power through a highly suspicious election process in 2017, the Adityanath-led BJP regime started an “encounter reign”, in which the police killed and wounded a large number of Muslims, Dalits and other backward class (OBC) men in staged “encounters”. Though the ostensible goal was purging the filth of crime, the real goal was to terrorise the Muslims, Dalits and OBC men, and establish the hegemony of upper-caste Hindu criminals in the underworld. People like Sengar, along with other big mafia gangsters, got a shot in the arm due to this policy of the Adityanath regime. They established their criminal hegemony more firmly than ever and unleashed a reign of terror in their territories. No wonder, the BJP has the highest number of members of parliament and MLAs with criminal background in Uttar Pradesh.

The Rashtriya Swayamsevak Sangh (RSS), which commands the BJP ideologically and micromanages its functioning, benefited immensely from the large influx of criminals in its ranks since 2014, which made it powerful enough to strike terror at any corner of Uttar Pradesh and use these criminals for communal violence in other states like West Bengal as well. For the sake of their ability to supply hoodlums, the RSS appeased men like Sengar and provided them ultimate immunity from the law. None of the BJP-affiliated criminals faced any serious charges in Uttar Pradesh and the police didn’t act against any of such gangster-politicians who are running their fiefdom with the support of the ruling party.

Though, for the sake of political optics, the BJP may have distanced itself from Sengar, who came to the party from the Samajwadi Party (some claim Congress), as the people’s mood is against the MLA, the notorious BJP MP and Hindutva rabble-rouser Sakshi Maharaj’s visit to Sengar in the jail before the Lok Sabha election, to seek his support, proves beyond doubt how the party and its ideological mentor are hand-in-glove with Sengar. The BJP supporters, hardcore Hindutva fanatics and misogynists, took out a rally in support of the accused when the charges were levelled against him. Such a rally organised following the Kathua model, where the BJP took out rallies in support of the accused who were later convicted of gangrape and brutal murder of an eight-year-old Muslim girl, also created a nationwide ruckus. This audacity of the BJP to rally in support of a rape accused shows the party’s real character. It reveals the utmost reactionary and misogynist character of the RSS and the BJP, whose men, following the teachings of VD Savarkar, have always used rape as a political weapon.

It’s known to Adityanath that if the victim of the Unnao rape case gets justice, then a can of worms will be opened in front of the world regarding the sexual predators within the BJP who are enjoying legal immunity due to their power and position right now. Hailing from an organisation whose leaders can call out Hindu men to dig out corpses of Muslim women and rape them, it’s evident that Adityanath will not allow justice to prevail in the cases where the BJP or other Hindutva fascist organisation’s men are accused of raping women. The recent tragic death of justice, mockery of the judiciary in several gangrape cases, which took place during the 2013 Muzaffarnagar pogrom, and the acquittal of all the accused, members and supporters of the BJP and the RSS, show the bandwidth available to the people to seek justice within the system.

Though the CBI will be handed over the case and Sengar will remain behind the bars (in a luxurious condition) until the public mood pacifies or until the case is thrown into oblivion, the historic trends prove that the woman victim can’t get justice as the rich and powerful have never faced judicial wrath in India, and while people like Prime Minister Narendra Modi or Uttar Pradesh Chief Minister Adityanath are ruling, it’s almost impossible to get justice from the Hindutvafied system. The CBI has been only good in filing chargesheets and investigating cases against opposition leaders, it’s unlikely it will ever dare to show any courage against Sengar or other BJP leaders unless it’s ordered by the Modi regime to do so. If the Adityanath regime and the BJP have decided to dump MLA Sengar as a face-saving measure, then only the CBI can do something really effective, otherwise, the cases will go on until eternity.

The woman is today fighting an uneven battle against death, apart from an uneven battle against BJP MLA Sengar and his criminal kingdom. Hindutva fascism considers women as sexual objects, baby producing machines. Drunk with power and privileges, the criminal MLA, and those like him embedded within the system, are confident of overcoming setbacks due to such allegations easily, as they know that by triggering communal riots and by inciting majority Hindus with Islamophobic vitriol,  they can easily erect a new subterfuge to divert people’s attention and mire the society into fratricidal violence, which will disunite the people and give these rich criminals a greater leeway in running their tyranny show.

It’s only a people’s movement in favour of the Unnao rape victim and her family members that can certainly help in keeping the government on retreat and force it to prosecute and punish the accused Sengar following the due process of law. Without a people’s movement, the plight of the victim will be lost forever, amidst the amplified cheering for MLA Sengar and the BJP. The start of the movements is inspiring and it’s to be seen how long this can go and how much effective changes such collective efforts can bring to do justice to women.