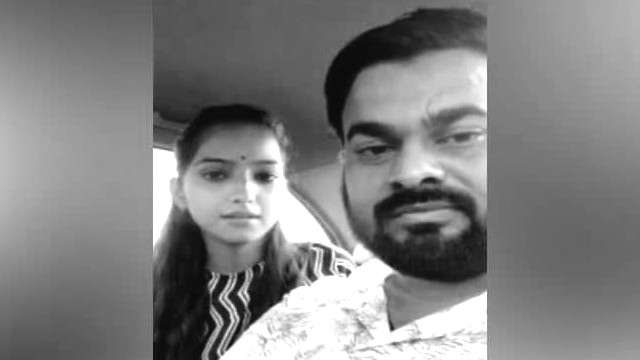 The daughter of a Bharatiya Janata Party (BJP) member of legislative assembly (MLA) from Uttar Pradesh released a video stating that she has married a Dalit man and if anything happens to her, her husband or her husband’s family members, then her father will be held responsible for the action along with the hooligans who are under his command. This is a bold step taken by the woman, who has become famous on social media, as on the one hand, by crossing the Brahminical casteist boundaries and norms, she showed immense courage in marrying a Dalit man, while on the other hand, her uprightness that made her expose the heinous conspiracies hatched by her father to separate her from her spouse. This courage and this daring attitude is a “must learn thing” for all women who live or travel in such areas of Uttar Pradesh, where caste is the determining factor of one’s life and choices.

After marrying Ajitesh Kumar (29) on Thursday, 4 July 2019, Sakshi Misra (23), who is the daughter of Rajesh Misra (alias Pappu Bhartaul), the BJP MLA from Bithari Chainpur in Bareilly district, uploaded a video on social media on Wednesday, 10 July 2019, when she couldn’t bear the threats, bullying and chasing by the goons, unleashed upon the newly-wed couple by the MLA. The Uttar Pradesh Police, which is utmost casteist in nature, ignored the plight of the couple under pressure from Chief Minister Yogi Adityanath-led BJP government, however, it was only when the video became viral that it issued nonchalant responses over the issue, asking the couple to reach them, which can eventually mean their death, as the police and the BJP are working hand-in-hand against any potential political threat in the state.

Though MLA Misra came on media and dismissed the fear allayed by his daughter as baseless, saying he didn’t try to kill Sakshi or her husband, his clarification to India Today didn’t sound convincing at all. The BJP is known as a strong opponent of women’s rights, especially the right of a woman to choose her life partner or even to hold an opinion. It’s unlikely that being a part of such a regressive and reactionary organisation, which is driven by the feudal Brahminical and Hindutva fascist values, Misra will show utmost calmness in the face of such an upheaval in his personal life. Though a television channel later brought the couple, the bride’s and groom’s family face to face, and Mr Misra claimed he has no grudges, it’s unlikely that the MLA will relinquish all options available to him to harm his daughter and son-in-law. The MLA categorically said as his daughter now belongs to Kumar’s family, it’s not necessary for her to be accepted by her family.

The sad fact of India’s so-called democracy is that it gives an impetus to the career of lawbreakers, criminals and mafia, who become lawmakers by winning elections using their money and muscle power to influence voters. Misra, too, has a long history of crimes and it’s his allegiance to the BJP and his upper-caste background, that he has got a dominant position in politics vis-a-vis the Muslim, Dalit or backward caste criminals of eastern Uttar Pradesh, who aren’t associated with the BJP. This power and this caste chauvinism drive people like Misra towards considering women as the sign of family honour according to the Brahminical patriarchal doctrine, resulting into them killing women members of the family for being in any love affair or marrying any man of a lower caste.

Even though it does not create a problem when a man of an upper-caste Hindu family marries a woman from Dalit or backward caste communities, the choice of the woman matters a lot. It’s not merely that women are killed in the name of “honour” by their patriarchal family members, especially fathers and brothers, for marrying or loving a man of a lower caste, they are also killed for exercising their right to choose a life partner for themselves, even if the partner belongs to the same caste and sub-caste groups. This “honour killing” is predominant in most parts of India, however, it has a stronghold in Uttar Pradesh, Haryana, Punjab and Rajasthan.

Denying the women the scope to exercise their fundamental rights, especially of choosing a partner for themselves and owning their own body and mind, the BJP wants to turn them into a baby-producing machine for Hindutva-incensed male chauvinists. The BJP leaders have spread enough xenophobia over Muslims, especially on the issue of inter-religious marriages by terrorising inter-religious couples and instigating communal pogroms over simple love marriages between Hindu women and Muslim men. The chief minister himself had been complicit in such crimes committed since years. The marriage between an upper-caste Brahmin woman and an ostracised Dalit man is absolutely not acceptable to the Brahminical hawks and their regime. Unless Sakshi used the video to make her story public, she would have been killed mercilessly by the guards of this Brahminical puritanism along with her husband to maintain the perceived purity of the obnoxious caste system.

Though Kumar himself has strong ties with the BJP, however, in an extremely complicated caste arithmetic, his political connections can’t save him where his caste is at fault. In such a situation, Sakshi and Kumar are fighting an uneven battle with not only a powerful MLA with thousands of goons under his command, but also with a state machinery that solely belongs to the ilk of Misra and supports his criminal endeavours, especially to perpetrate violence and terror to subjugate two lovers, a couple whose journey towards a family life begins now. It’s imperative that the terror of Misra, which is the terror of patriarchy against women’s right to choose their partner, is combatted by the democratic, anti-fascist and feminist forces, who can collectively educate, arouse and organise the people, the exploited poor from the oppressed communities, to stand up against the hegemony of such tyrants and bring their empire down with strong struggle of women’s liberation. It will take a long time to bring gender parity in a semi-feudal society like India, and to start this journey, a bitter struggle for political power against the likes of Misra and his bosses must be intensified from now onwards.