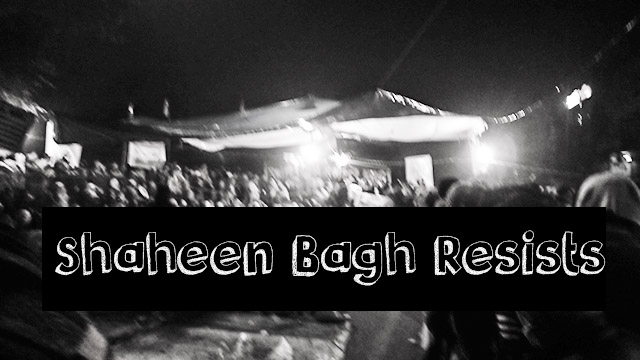 Braving the chilling winter, Muslim women of Shaheen Bagh in Delhi and Park Circus of Kolkata are steadfastly, and with total perseverance, protesting against the contentious Citizenship (Amendment) Act, 2019 (CAA), the National Population Register (NPR), and the National Register of Citizens (NRC) exercise planned by Prime Minister Narendra Modi and his Bharatiya Janata Party (BJP) to disenfranchise a large number of people, including Muslims, and reduce them into second-class residents in their own country. These Muslim women-led movements didn’t only irk the ruling classes, but they have also become rallying points for a plethora of opponents of the Hindutva fascist Rashtriya Swayamsevak Sangh (RSS), the parent body of the BJP and the ideological guide of the Modi regime.

Both Prime Minister Modi and his heir-apparent Union Home Minister Amit Shah have been trying their best to suppress the nationwide epidemic outbursts against the CAA, NPR and NRC using brute force. The Delhi Police and paramilitary troops are deployed to evict the Shaheen Bagh protesters at the blink of an eye, whenever ordered. Even in the face of such imminent threats of macabre atrocities, the women of Shaheen Bagh are still determined to carry forward their struggle.

To avoid angering the BJP and Modi, neither Aam Aadmi Party (AAP) chief and Delhi’s incumbent Chief Minister Arvind Kejriwal visited the protesting women of Shaheen Bagh nor West Bengal Chief Minister Mamata Banerjee, the self-styled champion of secularism, visited the women protesters at Park Circus. Surprisingly, both avoided the opposition meet on the CAA, NPR and NRC issue in New Delhi. The sheer refusal of these shrewd politicians to show any sign of solidarity with the women of Shaheen Bagh or Park Circus can be blamed on their absolute opportunist standpoint vis-a-vis the RSS-BJP and Hindutva fascism.

While Banerjee has been an enabler of Hindutva fascism throughout her political career, Kejriwal has helped to consolidate Brahminical hegemony in Delhi’s politics and made Islamophobia a normal affair in a predominantly Hindu political landscape. Both Kejriwal and Banerjee have played their roles as covert agents of the RSS-BJP. Their conspicuous silence on the question of supporting the women of Shaheen Bagh and Park Circus shows where their allegiance lies.

In such a situation, when the Delhi Police, controlled by Shah, is threatening to evict the women of Shaheen Bagh conducting a historic democratic protest in Delhi, which has drawn international attention as well, when the Kolkata Police is threatening to evict the women of Park Circus, calling their sit-in agitation illegal, then it’s their perseverance and resilience that are helping these women to stay firm on their political stand and not capitulate to the muscle-flexing by the evil powers. The secret collaboration between Kejriwal’s AAP, Banerjee’s Trinamool Congress (TMC) and the Modi regime can’t afford to subjugate the heroic Muslim women, who, since the time of the Jamia Millia Islamia University agitation in mid-December, have remained at the forefront and have become the chief mobilisers of the neo-anti-Hindutva fascist struggle in India.

Though the AAP, TMC, Congress, etc, have been either betraying the movements against the CAA, NPR and NRC by not participating in them, or are trying to hoodwink the participants by joining them at chosen occasions and then using the opportunity to hijack the movements, the women of Shaheen Bagh or Park Circus aren’t budging quite easily, they aren’t melting to the political debauchery and thuggery of the seasoned politicians, rather, with sheer determination, they are placing their sole demand of scrapping the obnoxious agenda of the Modi regime. Even though the Modi regime, driven by sheer hubris, notified the CAA, a law it’s using to hoodwink Hindus and neutralise their resistance towards the anti-people NPR and NRC, it’s the movement by the women of Shaheen Bagh and Park Circus, and the massive student movements around the campuses of India, that the RSS-BJP are in severe panic zone.

Islamophobic propaganda over the women of Shaheen Bagh and Park Circus, the milling of bush telegraphs to incite organised mob attack on these unarmed women of courage, especially in Delhi, aren’t fetching any success for the RSS-BJP in terms of political optics. Even the attempt by the Delhi Police to forcefully evict the women of Shaheen Bagh, failed due to the immense mass support enjoyed by these movements. Within minutes of sniffing any threat to the movement, thousands start reaching the protest venue to provide support to the women. People from all walks of life, all anti-fascist political camps and all religious affiliation have joined the Shaheen Bagh and Park Circus bandwagons.

The frantic support that these women of Shaheen Bagh and Park Circus have garnered is envious even for any seasoned political stalwart. Their resilience and courage also keep them resolute before all threats of state violence. Scared of their determination, either the Modi regime can unleash brutal state violence against the women, which will be covered up by the mainstream press and the RSS-BJP’s Islamophobic campaigning, or it may try to sabotage the movement from within by using the pawns like the AAP or the TMC.

However, as thousands are remaining vigilant, and as these protests by the women of Shaheen Bagh and Park Circus have helped different political outfits fighting a genuine struggle against Hindutva fascism to find a convergence point, it’s unlikely that the attempts to sabotage these movements by the RSS-BJP, or Modi’s pawns like AAP and TMC, will really bear fruits. Even though there can be limited and periodic setbacks, which may happen in case of severe state repression and violence, as these movements are neither organised nor driven with a professional zeal, the momentum that’s created will not leave the Hindutva fascist enterprise at peace. Under any circumstances, the Modi regime will crumble due to the people’s movements only, mostly led by fearless women.