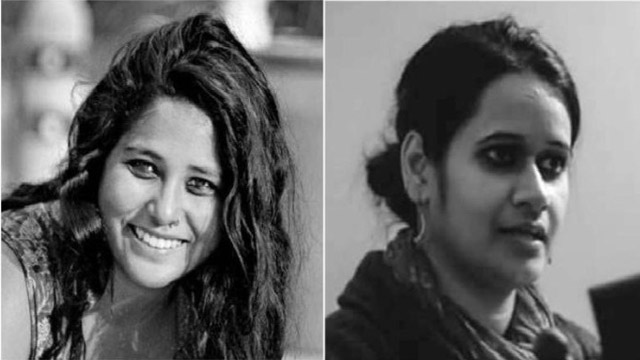 Two young activists from Pinjra Tod, Devangana Kalita and Natasha Narwal have been arrested by the Delhi Police on May 23rd. They were arrested from their homes following an FIR registered by the Jaffrabad Police Station, North East district.

They were presented before the duty magistrate at Mandaoli Jail and were granted bail in the FIR 48/20 registered at PS Jaffrabad after the Magistrate pointed out that “the accused were merely protesting against NRC and CAA and didn’t indulge in any violent activities“. Conversely, after such an order, the police officials from the Crime Branch relocated a fresh application seeking arrest and 14 days police custody based on FIR 50/20, PS Crime Branch.

This new FIR contains severe charges such as an attempt to murder, criminal conspiracy, rioting, blockade and assault of public servant while discharging duty and sections under Arms Act, which is quite amazing in the state’s lie wrap. Two days of police custody remand has been subsequently granted by the magistrate while rejecting the original request for 14 days police remand, which is ruthless.

Over the past two months, the notorious Delhi Police, which reports to the Bharatiya Janata Party (BJP) leader and Home Minister Amit Shah, has detained Jamia Millia Islamia University (JMI) students Meeran Haider, Safoora Zargar, along with activists like Ishrat Jahan, Khalid Saifi, Gulfisha Fatima and hundreds of Muslim youth and booked Zargar and Haider under the draconian Unlawful Activities (Prevention) Act (UAPA) to muzzle the widespread protests against the Citizenship (Amendment) Act, 2019 (CAA 2019), and the National Register of Citizens (NRC) exercise proposed by the CAA, 2003. Similar cases of persuading new cases at the time of grant of bail on same charges have been used to keep many of the arrested to languish behind the bars despite the need to unclog jails due to COVID-19 pandemic.

Attacking minority institutions like JMI and Aligarh Muslim University and showing total indifference towards the fate of millions lurching under a survival crisis, the Hindutva state resorted to the violence unleashed against the minority community. In Northeast Delhi, the heinous anti-Muslim pogrom that took place between February 24th to February 27th is sought to be cloaked by reporting it as an inter-community rift. The mainstream press called it a clash between anti-CAA and pro-CAA protesters, without clarifying how an oxymoron like a “pro-CAA”, ie, a pro-law, protester can exist?

The rising helplessness among the people and the immense repression and impoverishment of the Indian masses, lent the arrested activists a will to fight to the best of their ability. These women tried to traverse the fascist time holding on to courage transmitted by the millions who continue to struggle on for dignity.

At the same time, Kapil Mishra, the notorious BJP leader who led the 2020 Delhi anti-Muslim pogrom, remains scot-free and continues to enjoy the state’s patronage and security. A fugitive diamantaire Nirav Modi and his uncle Mehul Choksi, two closest Gujarati comprador supporters of Prime Minister Narendra Modi’s BJP, who stole public money worth Rs 127 billion from the Punjab National Bank remain aloof from the law in a foreign land since the last two years. Emboldened by the BJP’s patronage, Choksi even showed the audacity to write to the investigating agency – Central Bureau of Investigation – that he can’t return to India citing his adjourned passport among the reasons.

There have been hundreds of Mishras, Choksis and Modis who have been roaming free at will while Kalitas, Narwals or Zargars are sent to a world from where their voice won’t come out when we need to hear them the most. These women have been tagged to be part of anti-CAA 2019 protests in Delhi like other Jamia scholars. The Modi regime won’t let Muslims and the oppressed people speak up; thus, it has adopted all the inhuman measures to suppress the masses.

As the Modi regime wants to protect all frauds of public money and jail the sensible humans who react against the state’s ruthlessness, the anger among the mass is not yet getting visible due to lack of political work at the grassroots. The interesting part is that during the Congress party’s rule, there had always been a class factor in enmity unless there arose a question of outlawed political organisations. During the BJP’s sclerotic rule, even the elite Muslims are getting jailed. The attack is so indiscriminate that anywhere anyone could be targeted on any protest connection. The Modi regime has a very well-planned strategy to use the COVID-19 lockdown and restrictions to prevent any mass gathering or political movement. The comfortability of the ruling classes in all these arrests is unprecedented.

The problem now is that there is a dearth of strong, organised and assertive political voices taking the side of these activists. The fear of losing Hindu votes and the fear of the pandemic have paralysed the mainstream opposition. This creates a scenario where the people’s alternative politics should take up the opportunity and rejuvenate grassroots movements by instigating the masses after equipping them with the correct politics. The only faith rests on common masses who have the power and the zeal to boot out the corporate-feudal nexus-sponsored Hindutva fascists. It’s only their political arousal that can save the society from imminent doom and an economic catastrophe.