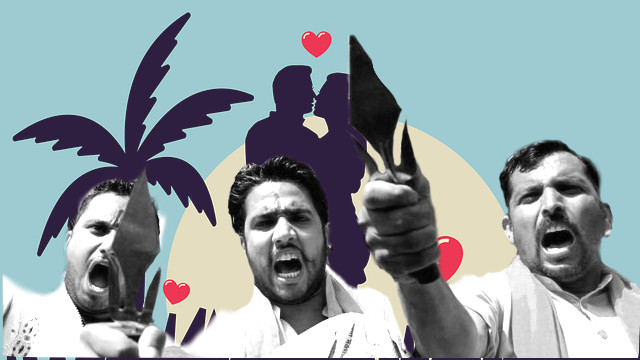 February 2021 was a momentous month for Indian women, a week of hope and sorrow. Both celebratory and alarming, it was a month that signalled some change but also brought home the fact, that how not much has changed for women, in the real sense of it.

As editorials after editorials raved about the Priya Ramani verdict and what it means for the modern woman (and rightly so), on the other hand, the Uttar Pradesh Assembly passed The Uttar Pradesh Prohibition of Unlawful Conversion of Religion Bill, 2021, also known as the anti ‘love jihad’ law, on Wednesday, February 24th.

Barely a few days before the tokenism of International Women’s Day is observed across the world, with women’s rights and equality taking centre-stage among other things, there couldn’t have been a better (or worse) timing for this development.

For those who have spent the last couple of years living under a rock, cut off from the outside world and the internet, ‘love jihad’ is a term coined sometime in the late 2000s by Hindutva fascist outfits with two major characters at the fore – one the conniving virile Muslim man out to woo and trap the second, naïve unsuspecting Hindu women into marriage. Allurement, trickery, coercion and such tools are purportedly employed by the former on the gullible latter, necessitating that the women be protected from such overtures.

Oops! There is a third. The protector.

The ones who now have the protection of the law passed by the Uttar Pradesh Assembly to aid their anti-Muslim conspiracy theory of ‘love jihad’.

From Uttarakhand’s Freedom of Religion Act prohibiting conversion of religion for the purpose of marriage to Madhya Pradesh’s Dharma Swatantra (religious freedom) Ordinance, 2020, and with the promise of such ordinances on their way in other states ruled by Prime Minister Narendra Modi’s Bharatiya Janata Party (BJP), the controversial law, which reeks of Islamophobia (the ideological force of the Hindutva fascist fraternity called Sangh Parivar), is not just about the divisive hate politics for which the regime is notorious.

For those vocal about women’s rights, the problem lies deeper. And at several levels.

To begin with, the very idea of ‘love jihad’ infantilises women, rendering her incapable of making informed decisions for herself. It completely overlooks the fact that a Hindu woman can ‘choose’ to fall in love with a Muslim man. Girls and young women continue to be perceived as susceptible, unintelligent beings and in need of constant policing.

After all, marriage is not just an alliance between two people but between families, castes and communities.

While enough data is unavailable about consent in marriage, speaking of how absurd this idea is to researchers as well, a Scroll.in article refers to a state-wide survey by Population Council in 2018 that found that 40% of girls didn’t participate in the decision of when and whom to marry. One in two girls just agreed to marry whosoever their parents chose, few of them had the good fortune to be shown a photograph of the groom before marriage.

It is no surprise then in a state where 57% girls met their husbands for the first time on their wedding night, the idea of allowing a woman to choose her partner is laughable, to say the least.

But this idea is not just limited to Hindutva fascist outfits or even just one state today. From the police to the judiciary to even women’s groups, all are complicit in the idea. An idea that dates back a hundred, if not more years.

One of the most-referenced pieces in this context is historian Charu Gupta’s journal, ‘Hindu Women, Muslim Men: Love Jihad and Conversions’, which lists campaigns like ‘shuddhi’ (purification of Hindus converted to other religions) launched by the Arya Samaj in the 1920s, a period which saw a well-oiled propaganda campaign against Muslims carried out in newspapers, leaflets, posters and the likes. Sometime in 1928, a poem ‘Chand Musalmanon Ki Harkaten’ (The activities of a few Muslims) was penned and soon gained popularity as it described the work of Islamic fundamentalists trapping Hindu women to increase their population.

The bodies of Hindu women and their vaginas became tools to draw communal lines. A hundred years later, these campaigns have an uncanny resemblance to the modern-day propaganda by the right-wing extremist groups.

A century has passed but men continue to fight for their control over vaginas and wombs.

At the crux of this campaign lies the patriarchal, upper-caste construct of purity and pollution where a woman symbolises the family’s honour and purity. Irrespective of caste or even religion for that matter, her body has been a site for claiming community homogeneity.

‘Love jihad’ establishes, as its base, that a woman’s honour lies only in her body, her sexuality which needs to be controlled by others, aka, men. What’s problematic about this idea is not just that it robs the woman of her right to sexual self-determination but also makes her vulnerable to punishment wherever her behaviour/s is found transgressive.

An article by Raj Shekhar Sen in the News Laundry echoes this sentiment. “They look at women in a binary, either to be worshipped or to be stripped of all their dignity. The depiction of Bharat Mata as a god and the idea of winning over the newly subjugated Kashmiri women fall on two sides of this binary. The treatment of a non-compliant woman as a witch is another aspect of this binary (Arundhati Roy as Surpnakha on Sudarshan TV, even the caricaturing of Mamata Banerjee or Mayawati can be seen through this prism) (sic).”

70 years, and counting, of a liberal democracy and we only seem to be moving back in time. At least since 2014.

Women’s Day is around the corner. Beyond all the bluster that typically accompanies it, grave issues remain to be dealt with.

What is ironical is that India is increasingly mimicking its neighbour, which it has mocked for decades. Laws that specifically target women’s rights and her agency over her own self are being passed. But what’s even more striking is the silence of the vocal feminazis, deafening indeed.

The bra-burning brigade which jumped on to the #MeToo movement of the West, naming and shaming movie stars, senior journalists, ministers and even co-workers, are busy sipping a Bloody Martini celebrating token victories while Yogi Adityanath and his ilk, have embarked on their campaign to deprive Indian women of the right to choose who they love and who they marry.