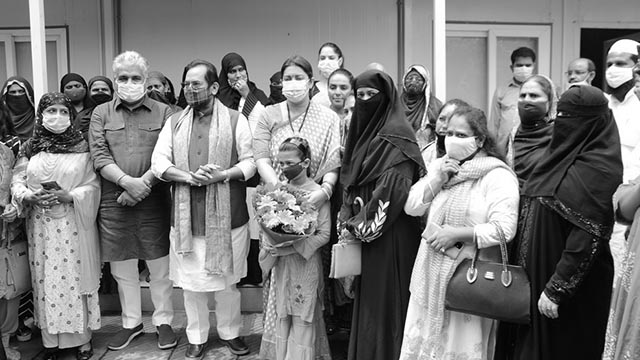 Irony kills itself several times a day in Modi-fied India. Prime Minister Narendra Modi’s government celebrated “Muslim Women Rights Day” on August 1st 2021. This day is celebrated to commemorate the enactment of the Muslim Women (Protection of Rights on Marriage) Act, 2019 (MWA 2019), which criminalised “triple talaq”–a rarely-followed form of divorce practice among a few Muslim sects. The Modi government and the ruling Bharatiya Janata Party (BJP) have claimed that the MWA 2019 has liberated Muslim women from the archaic practice of “triple talaq” and “empowered” them.

According to the government’s press agency, Press Information Bureau (PIB), the handful of Muslim women who attended the “Muslim Women Rights Day”, had thanked Modi for strengthening their “self-reliance, self-respect and self-confidence”. The PIB report claimed that the women said that the Modi government has “protected their constitutional, fundamental and democratic rights by bringing the law”.

The MWA 2019 criminalises the practice of talaq-e-biddat, whereby a husband could divorce his wife by uttering the word “talaq” (divorce) thrice or giving it in written, arbitrarily. The MWA 2019 made the practice of “triple talaq” a criminal offence, which can jail the husband for three years. As the practice is turned into a cognisable offence through section 7(a) of the law, the accused can be denied bail unless the magistrate is “satisfied”.

Before the Modi regime passed the MWA 2019, a five-judge bench of the Supreme Court had set aside the “triple talaq” practice as “manifestly arbitrary” in majority 3:2 judgement on August 22nd 2017. The apex court verdict said that the practice can’t be protected under Article 25 of the Constitution of India. The Modi regime brought an ordinance in September 2018 to criminalise “triple talaq”, which the BJP used to terrorise marginalised Muslim men.

A few days before locking up Kashmir and humiliating its seven million population by imposing a barbaric martial rule and lockdown on them, Modi had rejoiced the liberation of Muslim women using the “triple talaq” law. Modi said in the Parliament: “An archaic and medieval practice has finally been confined to the dustbin of history! Parliament abolishes triple talaq and corrects a historical wrong done to Muslim women. This is a victory of gender justice and will further equality in society. India rejoices today!”

Modi pulled an emotive tug by playing with the “triple talaq” ban card, which is a part of the Rashtriya Swayamsevak Sangh’s (RSS)—the ruling BJP’s parental body—a project to turn India into a theocratic state ruled by upper-caste Hindu elites. The RSS has been proposing a uniform civil code for India, albeit with a Hindu, upper-caste flavour. The uniform civil code wants to turn all personal laws of minority communities like Christians and Muslims to conform with those approved by the Hindu upper-caste.

Before celebrating the “Muslim Women Rights Day”, the Hindutva fascist BJP and the RSS used different gimmicks to prove that Modi is supported by the Muslim women. During the 2019 Lok Sabha elections, the BJP used the “triple talaq” ordinance as a gift to Muslim women and claimed that the women of the minority community have voted for the party. The Party resorted to several stunts to prove that the Muslim women are supporting the BJP, unlike Muslim men.

In October 2019, a handful of Muslim women came together to build a temple of Modi in western Uttar Pradesh’s Muzaffarnagar, as a token of gratitude for “triple talaq” abolishment. The venue of the temple, Muzaffarnagar, was the epicentre of a large-scale anti-Muslim pogrom in 2013, which paved the way to Modi’s landslide victory in. the 2014 Lok Sabha elections, riding on the polarised Hindu vote bank. Yet, the gimmicks like these couldn’t help the Modi regime hide its grotesque face behind the satin mask for long.

Soon after the Citizenship (Amendment) Act, 2019 (CAA 2019), which allows 31,313 non-Muslim refugees from Afghanistan, Bangladesh and Pakistan to apply for Indian citizenship, was passed by the Parliament in December 2019, the Muslim women of Shaheen Bagh in southeastern Delhi, followed by Muslim women in other parts of the country, started sit-in demonstrations against the contentious law, which they conceived wrongly as one that will selectively disenfranchise Muslims. The BJP and the RSS, leaving all pretensions behind, jumped into the fray to vilify them and even threaten them.

The RSS sent men to shoot the women at the Shaheen Bagh protest site. In February 2020, the notorious BJP leader Kapil Mishra incited mob violence against Muslim women occupying the streets of northeastern Delhi, which snowballed into a large-scale anti-Muslim pogrom, killing around 55 people officially, while unofficially hundreds of Muslims are still “missing” in the police records. The Delhi Police brutally assaulted Muslim women students protesting the CAA 2019 at Jamia Millia University campus.

Moreover, as India turned into a dangerous place for Muslims under Modi, the 200m strong minority community in a country of 1.4bn, continued to suffer discrimination, violence and became victims of mob lynching. Though India saw a rise in hate crimes against Muslims, by Hindutva-incensed Hindu perpetrators, after Modi came to power in 2014, the incidents grew manifold during his second tenure. The Muslim women, who were dependent on the Muslim men, who became victims of mob lynching, suffered the most.

While the BJP celebrates the “Muslim Women Rights Day”, the likes of Naqvi want India and the world to forget that the Hindutva ideologue VD Savarkar, who is revered by the RSS and its progeny, justified raping Muslim women as a political weapon. The likes of Irani wants the Muslim women to forget that Modi’s hand-picked Uttar Pradesh Chief Minister Yogi Adityanath had shared a stage with a man who called upon Hindutva fascist thugs to dig out Muslim women’s corpses from graves to rape them. The other BJP leaders want to cover up the fact that the BJP and the RSS organised rallies in support of the rapists who gangraped an eight-year-old Muslim girl in Jammu’s Kathua and killed her for her religious identity.

The BJP and the RSS have continuously raised the tempo of “love jihad” bogey, alleging that “virile Muslim men” lure Hindu women and convert them to Muslims to marry them. In Uttar Pradesh, Yogi’s stormtroopers of the Hindu Yuva Vahini have been accused of abducting, raping and forcibly converting the Muslim girls. The RSS’s patriarchal feudal ideology makes it obvious for its ardent followers to turn women into slaves of their machoism. This makes the Muslim women, who are 6.9% of India’s 1.4bn population, soft targets, victims of sexual assaults and gender discrimination.

Recently, the supporters of Modi and the BJP offered to sell Muslim women online through fake “auctions”. On the “Muslim Women Rights Day”, it was found that an upper-caste man called Kunal Sharma, who is a staunch follower of Uttar Pradesh-based Hindutva rabble-rouser seer Yati Narasinghanand, has been offering Muslim women’s phone numbers to Hindutva-incensed men on social media, with an intent to sexually exploit them. Sharma said, that sharing the Muslim women with all Hindu men will successfully implement Modi’s slogan – “Sabka Saath, Sabka Vikas” (With all, development for all). Neither Sharma nor his followers shy to flaunt their political affiliation with the BJP.

Amid all these, the Modi regime is celebrating “Muslim Women Rights Day” to mock Muslim women. The cosmetic show of concern for Muslim women by the BJP, after killing their family members, raping them and dehumanising them, can’t even influence a politically naïve individual. Until the sclerotic Hindutva fascist regime rules India, until Brahminical-feudal patriarchy thrives, neither the Muslim women nor any other marginalised women can enjoy their constitutional rights. For the very survival of women as equal citizens, the Brahminical-feudal patriarchy must be ousted along with the reactionary Hindutva fascist rule through popular struggles.