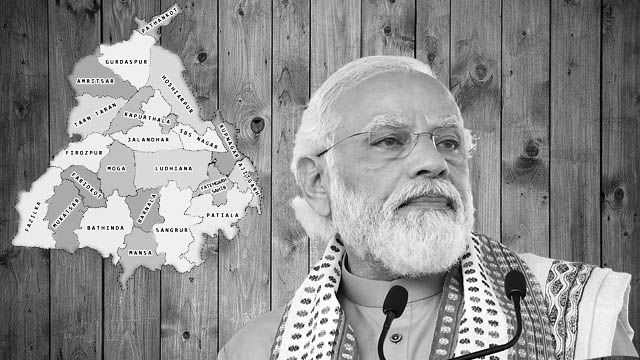 Though his “Sonar Bangla” (Golden Bengal) promise was drubbed in the 2021 West Bengal Assembly elections, Prime Minister Narendra Modi has unveiled his “Nava Punjab” (new Punjab) promise during the canvassing of 2022 Punjab Assembly elections, in which his Bharatiya Janata Party (BJP) has allied with former chief minister Captain Amarinder Singh and a breakaway faction of the Shiromani Akali Dal (SAD).

Punjab will vote on Sunday, February 20th 2022, to elect the next government. Apart from the BJP, the Congress party led by Navjot Singh Sidhu and incumbent Chief Minister Charanjeet Singh Channi, the Aam Admi Party (AAP) of Delhi Chief Minister Arvind Kejriwal and the alliance between the SAD and Bahujan Samaj Party (BSP) are battling for the top seat in the state. The results of the elections will be out on March 10th 2022.

Modi’s “Nava Punjab” promise fits his quintessential obsession with acronyms, despite periodic faux passes, as well as enchanting chimaeras that he use to dupe the people. The “Acche Din” (better days), promised during the 2014 general elections, never arrived, yet Modi shows the audacity to promise a new Punjab to the voters who are sceptical of the BJP.

Though unlike Punjab, the West Bengal Assembly elections were fought by the BJP using coarse communal diatribe and the prime minister did a blitzkrieg campaign, promising a “Sonar Bangla” throughout the lanes and bylanes of the state, they failed miserably in their pursuit. Fearing the same in Punjab, both Modi and the BJP aren’t using hyperbole of that extent that’s used during the election canvassing in Uttarakhand or Uttar Pradesh.

However, while Modi’s “Nava Punjab” promise isn’t a fresh one to entice the masses, the major roadblocks that are in front of the BJP in Punjab, which it can’t tread unlike the other contenders, can provide it with a major jolt in the state where it could never become a dominant power, despite years of hard labour invested by its parental body Rashtriya Swayamsevak Sangh (RSS).

Soon, in June 2020, the Modi regime brought three ordinances to allow the big corporates to enter the agriculture sector and to do away with the stringent provisions of the Essentials Commodities Act to allow hoarding and black-marketing of agricultural and horticulture products. This irked Punjab’s farmers who have been fighting for minimum support price (MSP) for all crops to secure their income.

Though sporadic protests started in rural Punjab from July 2020 onwards, under the aegis of different farmers’ organisations, against the ordinances, the protests intensified from September 2020 onwards when the Modi regime passed three anti-farmer laws replacing the ordinances. The situation was so tense that even the SAD had to severe its decades-old ties with the BJP and quit the National Democratic Alliance (NDA) government headed by Modi.

On November 26th 2020, hundreds of thousands of farmers from Punjab rode their tractors to the capital New Delhi, facing brutal police atrocities, and started a large-scale sit-in demonstration in different borders like Singhu Border and Tikri Border. They sat there for 378 days until the Modi regime repealed the three laws in Parliament on November 29th 2021. The farmers also organised the historic “tractor march” on January 26th 2021, India’s Republic Day, to raise their demands.

Apart from unleashing macabre police atrocities on the farmers during their march to Delhi through the BJP-ruled Haryana, the Modi regime also attacked them brutally during their “tractor march” on January 26th 2021. The police atrocities allegedly killed a Sikh farmer from Uttar Pradesh. The BJP didn’t only attack the farmers, especially those from Punjab, but it also vilified the Sikh farmers’ historic hoisting of the sacred Nishan Sahib in Delhi’s iconic Red Fort.

The Sikh farmers were demonised by Modi’s servile mainstream media houses as “Khalistani” terrorists and their entire self-sustaining, organic movement was called a “foreign-funded” conspiracy. Though the farmers managed to force Modi to retreat from his obstinate stance on the contentious farm laws, he did it for the sake of Uttar Pradesh Assembly elections, rather than Punjab.

Now when Modi’s “Nava Punjab” promise is reiterated in the state, can the BJP clarify whether it accepts that its opposition to the farmers’ movement was wrong and that it has committed a crime against humanity by indirectly killing 700-plus farmers during the 378-day-long struggle?

While announcing his decision to repeal the laws, Modi didn’t accept that the laws were anti-farmer in character, rather, he claimed that his government has “failed to convince a small section of farmers”. Isn’t this a direct insult to the farmers who fought against the powerful state-corporate nexus for their rights?

If Modi is seeking the votes of the Punjabi people, especially of Punjab’s overwhelming majority of farmers, can he explain why his government has failed to fulfil the written commitments given to the farmers regarding forming a committee on MSP, providing justice to the farmers who lost their lives during the agitation and withdrawing criminal cases lodged against the farmers who had participated in the movement?

Why didn’t he sack the Union Minister of State for Home Affairs Ajay Mishra “Teni”, who has been accused of being complicit in the Lakhimpur Kheri farmers’ massacre along with his son Ashish Mishra? Why didn’t the BJP government in Uttar Pradesh oppose Mishra’s recent bail?

If Modi and the BJP are determined to continue with their anti-farmer stance, then what’s the source of the audacity with which they seek votes in Punjab? Why is Modi, who got scared after seeing a farmers’ roadblock in Punjab recently and accused the farmers of conspiring to kill him, now seeking their votes? What does Modi’s “Nava Punjab” promise have for the farmers of the state or its landless labourers? How does the model propose to resolve the agrarian crisis that is paralysing the rural economy in the former prosperous state?

Facts show that Modi’s “Nava Punjab” model has nothing substantial for Punjab’s farmers, who form the backbone of the state. Rather, it’s merely a subterfuge to lure the susceptible minds and captivate them with ultra-hysteric jingoism and xenophobia. Though the upper-caste urban Hindu elites and middle-class will still buy Modi’s propaganda in Punjab and vote for the BJP due to their shared contempt for the farmers, the latter will never go with the BJP until the horrific memories live in their memories.

How does Modi’s “Nava Punjab” agenda plan to deal with the unemployment crisis in Punjab, which is constantly rising, when the same can’t be addressed in its neighbouring and equivalent state ruled by the party? What does Modi’s “Nava Punjab” model promise to the state’s unemployed population when the central government has been constantly denying that unemployment is a persistent threat to India’s economy?

As the Modi regime has skipped the task of creating employment opportunities throughout India in the last eight years, it’s unlikely that even if the party, with its allies, manage to secure a majority in Punjab then it will deal with the unemployment crisis showing urgency. Rather than focusing on jobs, Modi’s “Nava Punjab” agenda encompasses all non-essential points that have little significance in the lives of the poor and the downtrodden masses.

Months ago, through an undemocratic amendment to the Border Security Force (BSF) Act, the BJP-led government at the Union had empowered the paramilitary troops to conduct a raid and arrest suspects within a 50km radius from the international boundaries. The BSF guards the Indo-Bangladesh and the Indo-Pakistan borders and it’s responsible for any cross-border smuggling in the states like Punjab, Rajasthan, West Bengal, etc.

Modi’s “Nava Punjab” agenda shall be driven by the same people who have ruined Punjab’s agriculture, its industries and its people’s lives over the years. If the BJP is opposing the Congress party’s rule since 2017, then for more than four years it was Capt Singh who called the shots in the government. Now that same man is in Modi’s “Nava Punjab” team, which means there will be no new Punjab at all.

Moreover, before 2017, the BJP was ruling the state in alliance with the SAD. The BJP-SAD regime was booted out of power for its corruption, its failure to curb the drug menace and for its utmost indifference towards the farmers. The people of Punjab haven’t forgotten those days of the BJP-SAD regime in the state and it’s unlikely that they can consider Modi or the BJP as vessels of positive change in any circumstances.

With these many roadblocks and due to the people’s—especially the farmers’—anger against the BJP, Modi’s “Nava Punjab” agenda’s future appears doomed. The Punjabi people, reportedly, are showing a complete disregard for what Modi says or promises. Rather, they are focusing on ensuring that the fields of Punjab remain a citadel in India’s protracted struggle against Hindutva fascism and the corporate-feudal nexus that buttresses it.